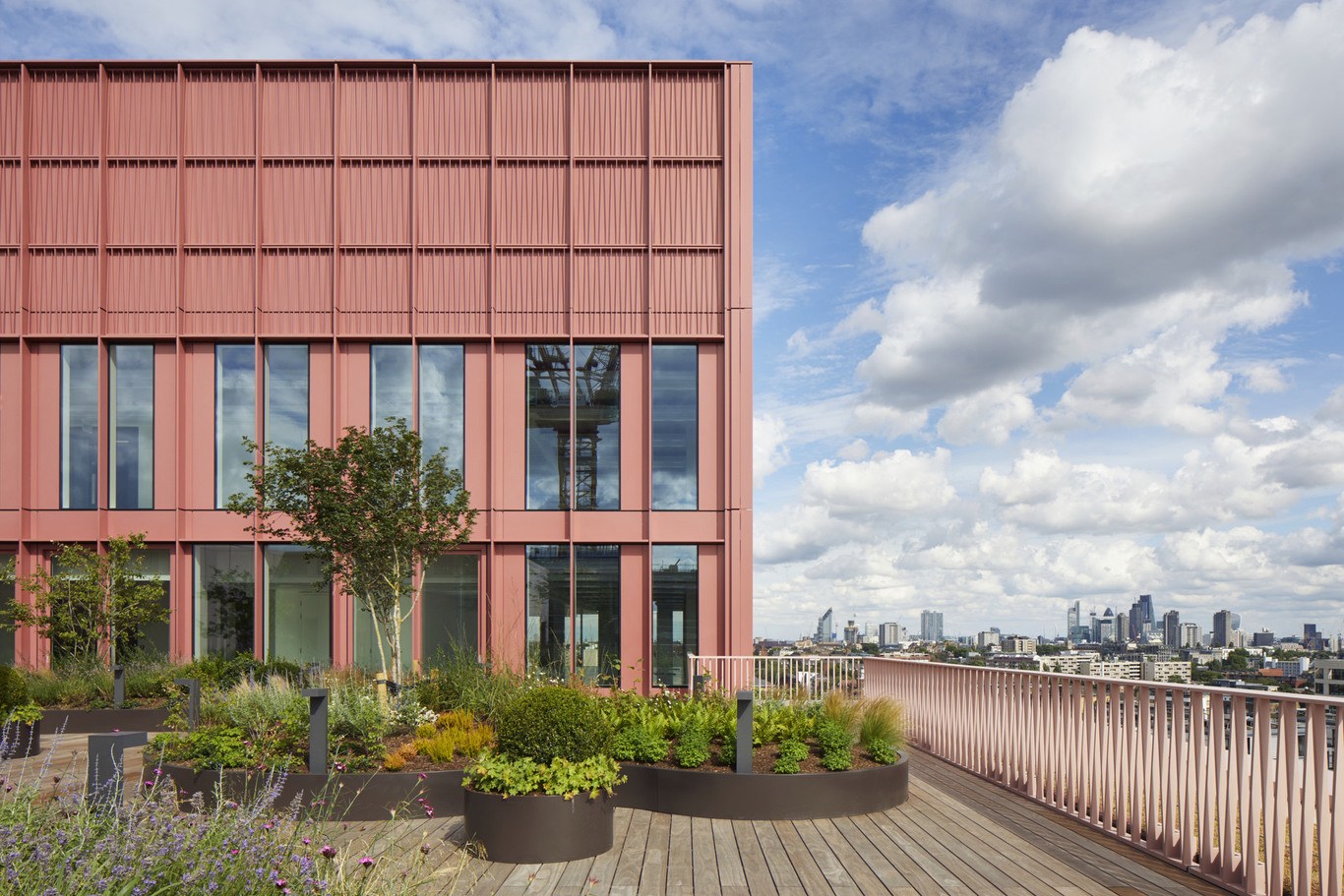 We enjoy a guided tour around the unique new landmark building that's home to the Everyman Cinema, Happy Face Pizza and Supermax

he King’s Cross regeneration area – all 67 acres of it – is notable architecturally for what you might call its cunning reinvention of the Victorian industrial fabric: those imposing granary buildings, goods sheds, gasholders and grain stores that now comprise the likes of Central Saint Martins, Caravan, Waitrose and, inevitably, luxury canalside flats.

One landmark that stands unique – and uniquely pink – however is actually a new-build. The 11-storey R7 is a civic-minded block that opened in late 2017, named after “a grid reference on the masterplan of King’s Cross”, according to architect Joe Morris (of Hoxton-based Morris & Company).

Its raison d’etre as a modern-facing workplace is a twist on the more traditional idea of the closed-up office block, underlined by the presence of the Everyman – possibly my favourite London cinema – and, last month, the addition of vast new pizzeria Happy Face on the lower ground floor, plus cocktail bar Supermax in the basement. Three very good reasons to step inside, in fact.

The R7 building is two-toned, with terraces punctuating the facades, and an elegant colonnade at ground-floor level on Handyside Street. We roped in Joe to show us around.

How did your company get such a prestigious contract? “I met the developers, Argent, in Cannes back in 2007,” he says. “They were trying to work out how to get people beyond the massive hurdle of the Central Saint Martins building (not then in existence) – and the question was what will draw them in? So R7 had to be very visible: you come out of King’s Cross station and you can see it. And when you walk in here and loads of things happen, like the Everyman, Happy Face, a spin studio, and of course offices.”

Joe argues that how the building’s uses are all accessed is uniquely democratic for the area. “If you walk around the entire King’s Cross site,” he says, “this is the only building where everyone comes through the same front door entrance on the ground floor.”

He got the green light from Argent in 2013 for a four-year design and build. Standing outside on a cool December afternoon, we look up: its differing heights correspond with that of the neighbouring CSM building, its stepped shape allowing terraces on all floors. “In the middle of the street is a theoretical 60-degree cone of light which dictates where buildings can and cannot go,” he says. “It’s about getting sunlight into the space. We’re able to tilt the cone so the building’s shape is cut in the right space to get as high as we can.”

What of the striking colour, which riffs on the red brick of St Pancras? “We used pink as code,” he says, “there’s no context or rationale or anything – we’ve just always used pink, we like pink. We were looking at all the usual greys and blacks, and we thought let’s stick with this colour. It’s all about the view from King’s Cross and getting people up, it becomes an anchor that people see from afar: when the sunlight hits, it’s iridescent so it glows orangey – in black buildings nothing happens, but this has got real fizz.”

On every level there’s at least one balcony. “Offices don’t generally do that, they’re hermetically sealed, so there’s that, as well as a shared six-thousand foot roof terrace.”

More of that later. In the meantime we enter through the revolving doors and stand in the atrium, with its seven-metre high concrete ceiling, tropical plants and pendant lighting. A public space – anyone can confidently stroll in through the revolving doors – it’s planned “like a generous street”, he says, with the three-screen Everyman branding in its own demise; their own architects designed that area.

Behind R7 will be more mixed-use buildings, currently under construction, with a series of office spaces for smaller companies and start-ups. “There’ll be a flow of people through here,” says Joe. “At the back will be the yard, two big buildings and two SME spaces; people will be drawn through our space to access them.”

We’re on the rooftop now, a slick lift having chucked us out onto a canopied space enclosed by evergreen shrubs, grasses and herbs. It’s surprisingly wind-free eleven storeys above Handyside Street and, in the late afternoon, the view is spectacular as the sun sets to the west beyond the BT tower. Up here you really get a sense of the famous Heatherwick-designed ‘kissing’ roofs of Coal Drops Yard. “They’re incredibly manipulative and formalistic,” says Morris, “but to my mind it works. Coal Drops is real Marmite, dividing the [architectural] community – some think it abhorrent and some marvel at its ingenuity.”

As we admire the panoramic aspect, he explains how King’s Cross occupies a unique axis. “The thing about this location I’m inspired by is that it’s bold and not subservient to the context or history,” he says. “The gasholders were sent away and relocated – Gasholder Park is a reinterpretation. And behind the Grain Building is all brand new – what’s beautiful about it is that it works in a seamless way, new and old sitting side by side. This is a real benchmark for any other regeneration project.”

Any fave local spots? “I love the southern edge of Coal Drops, the way you skirt around the rear, walk along the canal into Gasholder Park: a beautiful route, it really connects it to the historic architecture of this part of the city. And one of the best parts of London now is Granary Square: on a sunny afternoon in summer, it’s the new Riviera in London.”

What’s next for Morris & Co? “On the back of this we have a number of new workspace projects,” he says, “including Nine Elms, White City and Old Street, where we can learn from what we’ve done here, about amenity, entrances, different uses, the function of the street and how you get through buildings.”

Quiet note to self: in future, always look up.