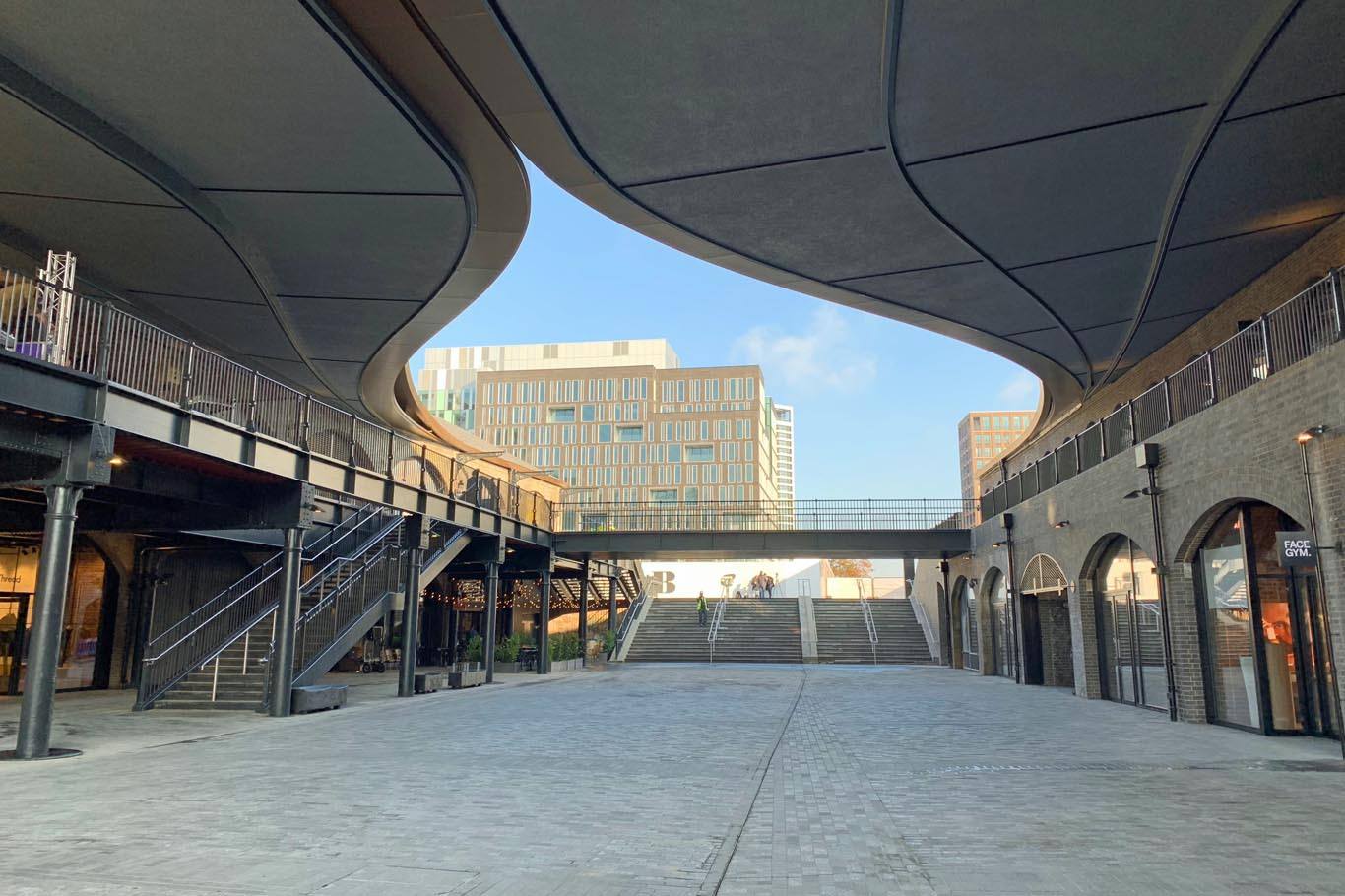 oused in vast heritage buildings that have been used across 160 years, (first for moving coal and stone, then storing glass and more recently dancing at Bagley’s nightclub), Coal Drops Yard is the newest incarnation for the old railway infrastructure just behind King’s Cross Station.

And, after an inaugural visit today, we can assure you it’s pretty impressive.

Below we present the essentials for any visit, from the coolest brands to be discovered, to the hottest places to eat, and the many events spaces holding everything from fitness classes to catwalk shows.

Creating a new shopping district within huge buildings originally designed for trains, horses and tonnes of coal requires an offering as striking as the surrounds. Where clothes are concerned, the requisite wow-factor comes via a brace of unique concept stores, including Los Angeles-styled Twiin, featuring the finest West Coast clobber, plus a playful light installation to ensure the place is bathed in a permanent LA glow. Brit fashion champs Wolf & Badger bring 700 brands to what once were the vast dancefloor areas of Bagley’s nightclub, while Cos are soon to merge their own art and design influenced style with further wellbeing and lifestyle brands in another vast concept space, while Liverpool’s Outsiders Store do the same for functional adventure clothing and equipment. Desirable indie labels abound too, such as MHL by Margaret Howell, who can be found in arches alongside the canal, Danish rubber coat and bag dons Rains, and heritage quilted jacket purveyors Lavenham. Menswear specialists Universal Works and Form & Thread join womenswear from Emin + Paul and lingerie from sisters Mazie Fisher and Abbie Miranda, aka Beija London. “There’s something really exciting about all of us shopkeepers opening at the same time,” says Mazie.

There’s already been a buzz around first new opening The Coal Office and the much-anticipated arrival of a new Barrafina, the Michelin-starred Spanish tapas bar, here featuring an outdoor terrace, with an open kitchen and private dining room inside. The same operators, Harts Group, also bring Borough Market’s mobbed Mexican-influenced El Pastor to another big indoor/outdoor space to be known as Casa Pastor, plus launching a wine bar, The Drop, featuring a drinks-focused experience on yet another stunning elevated terrace. Or how about exploring the selection of fifty Vermouths at all-day café Vermuteria, a Spanish-meets-Italian opening by chef Anthony Demetre of Mayfair’s Wild Honey? We’re also looking forward to eating at Hicce, with dishes grilled, smoked or steamed by wood fire, the first restaurant from former Murano head chef Pip Lacey. And further pit-stops can be happily stumbled upon throughout the area, from Raw Press juices within Wolf & Badger to coffee at lifestyle store Bonds, or serious grilled cheese toasties at Morty & Bob’s who are expanding from their secret café at Hackney’s Netil House with killer coffee and cocktails too.

While turning heads with their dramatic architecture from Shanghai to Cape Town, Thomas Heatherwick Studio has been based in King’s Cross from way before it was a desirable locale. Therefore, the commission to work on transforming the area’s listed coal drop sheds was especially close to their hearts. “As a local person, I was thinking: how do you do something that is really particular to here?” Heatherwick said recently. Both roofs needed replacing, so his practice used this as a basis for fusing them together, creating a square with a raised central building, as traditionally seen in market towns such as Ledbury. “We used the same Welsh slate from the same seam that the original roof was from,” says Thomas of the sweeping new structure (pictured below). “We can’t wait to see how people use it.”

Fashion runways amidst the arches and wrought iron pillars have been a staple image when previewing CDY, and the stores are embracing the power of such experiences. There are dedicated event spaces at Wolf & Badger, a hands-on design workshop at Tom Dixon, and fitness events held at glam activewear store The Sports Edit. With Central St Martin’s just across the way, expect plenty of shows and collaborations too, plus opportunities to learn crafts like jewellery-making, or food and drink tasting events.

Occupying the soon-to-be-iconic bit under the ‘kissing’ roof will be Samsung KX LDN, the Korean tech giant’s bold repost to the Apple Store. The aim is to create a digital playground, so expect plenty of experiences and events here too. Alongside the latest phones and tablets you’ll find fridges that do the grocery shopping and TVs that become framed works of art.

Drop in to FaceGym for a next level workout – focusing solely on revitalising your tired mug. In-house trainers sculpt and tone the face’s forty ‘forgotten’ muscles with kneading and stroking, and have all manner of skin products plus laser, cryo and radio-zapping tech at hand too. Manifesto is the men’s grooming destination featuring a polished concrete design as sharp as the treatments. Miller Harris offer indulgent fragrances in a fully immersive store, while over at Bonds they hand-pour their range of scented candles in a lab in the store, alongside their own fragrance range. Oh, and there’s always Le Chocolat, bringing decadent ganaches, pralines and chocs direct from Paris – top pampering indeed.

Tom Dixon has stolen a march here, with five arches of lighting, furniture and homewares, plus hosting partners such as The Rug Company and Danish lava-stone tile company Made a Mano. They’re joined by Parisian furniture and fabrics courtesy of Caravane, ceramics, linens and furniture at Bonds, and homeware at indie concept store S120.

Jeweller Maya Magal brings her handmade gold and silver to a unique new store, local spectacle-makers Cubitts offer their mix of tradition and tech in all things eyeglasses, and Lost Property of London arrive with their sustainably produced bags, too. Heritage men’s shoe manufacturers Cheaney have a new space here, as does Tracey Neuls, famed for her original take on footwear. “With so much sameness in the world, we enjoy offering a different viewpoint from shoes to shop,” she says.

The place for pop-ups and experimental stores is the sunken roadway currently bordered by the likes of Dishoom restaurant and the established 18 Montrose fashion emporium above. These atmospheric spaces, formerly home to The Key nightclub, will offer a platform for an ever-changing selection of new designers and concepts, which we aim to preview on these pages regularly.

10. A chance to reminisce

Many people will have experienced these buildings before, when the Goods Yard area was a mecca for London’s best nightlife back in the 90s. There are sure to be plenty of hedonistic recollections stirred for those making a return to the hallowed dancefloors of The Cross or Bagley’s. Back in 2014 we were lucky enough to take a hard hat tour of these venues just before serious redevelopment commenced and it proved an evocative trip down rave memory lane. Although the final party here was over a decade ago, there’s a warm familiarity to these spaces, now repurposed for a whole new era. The hardcore industrial charm that made dancing here so much fun is still very much the reason CDY will pull in the crowds once more.

Coal Drops Yard open daily from 10am-8pm Mon-Sat and 12noon-6pm on Sundays. The restaurants and bars are open until late