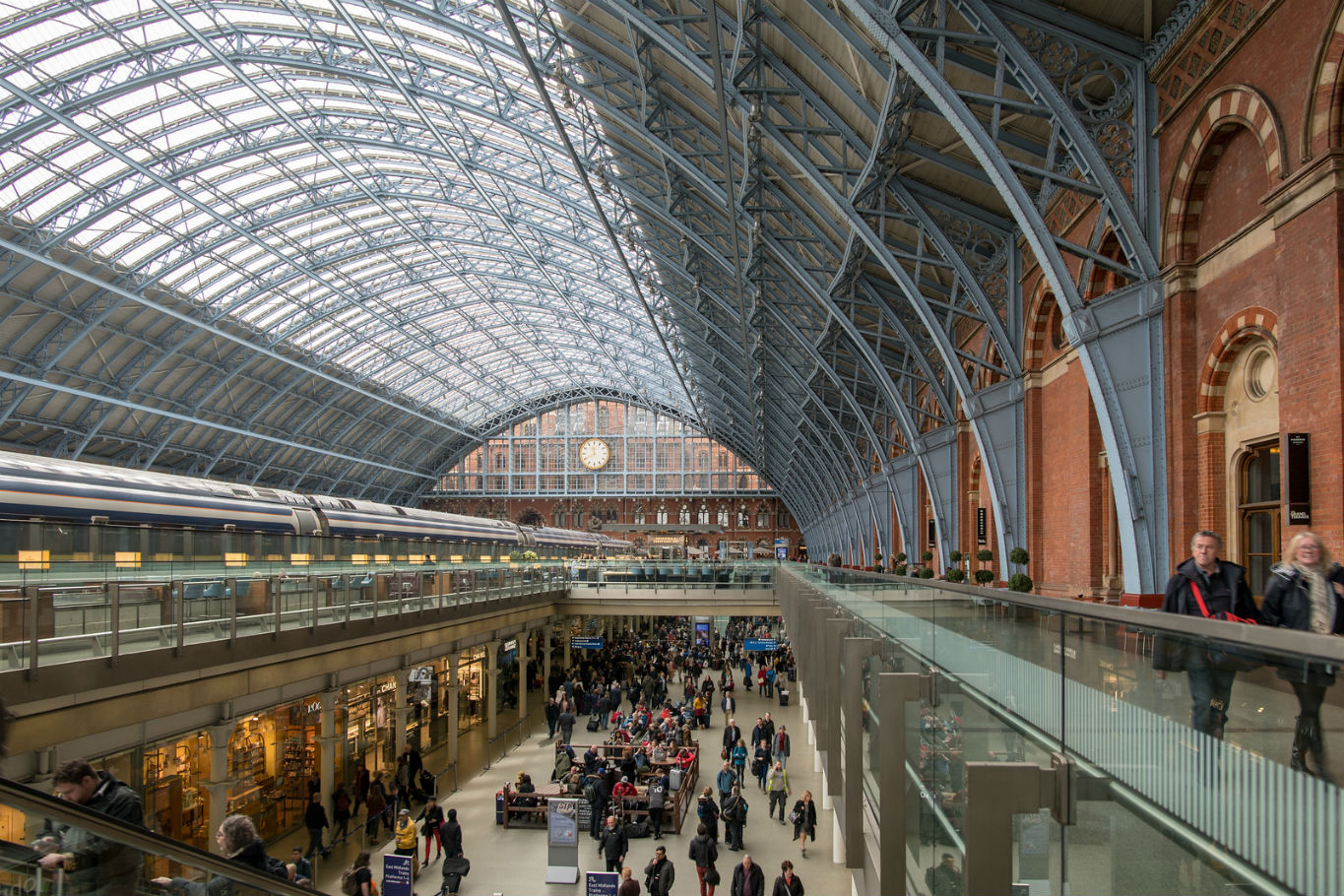 The story of St Pancras International – at 150

tanding under the departures board, a stream of people scurrying past, is tour guide John Finn. “Most people come here to get on the train,” he says. “But as many come to shop and eat. And yet for all those things, you don’t really look at the building. You’re aware there’s something rather amazing about it, but you don’t refocus too much. So today we’ll stop to admire aspects you’d normally pass by.”

The station’s been a major gateway since the Eurostar services kicked off in 2007. “They’re the reason the terminus was revived,” says John. Once threatened with demolition, but now a beacon of regeneration, the renovation has done a lot for the area. “The Francis Crick Institute has recently opened,” says John, “the biggest research centre in Europe, with a thousand scientists working there.”

The original station building has been seamlessly joined together with the new one. “It’s Grade I-listed,” says John. “That means not a brick of it can be altered. All the detail has been completely followed; no wonder it cost upwards of £800 million to refurbish.”

Gathering round Moyses Stevens, one of the county’s oldest florists, it’s obvious what John means. “The glass wall is cut to shape around the brickwork and mustn’t interfere at all,” he says. “So in theory, you could just take it down and leave the old structure untouched.”

The station was built in 1867 and opened the year after. “Midland Railway owned it and wanted to show off, so they built up a level for the platforms. The space below where we stand now was storage,” he says. “Each of the white columns supported the roof, and down here they kept a product that was all the rage – beer. Apparently, the distance between the pillars is equal to three barrels. When the area became derelict, it was used for stowing furniture.”

The project, completed over a decade ago, gave architects a chance to really do something. “The idea was to give the place a higher profile,” says John, “with upmarket shops – there’s no McDonald’s here.”

Walking along the airy arcade, we’re serenaded by a chap playing one of three pianos. One was donated by Elton John. “Some people come here to tinkle before they go to a stressful job interview,” he says.

Upstairs, it’s noticeably quieter. “The staggering thing is the fantastic roof,” says John. “When it was built it was the biggest unsupported ceiling in the world. Nobody had seen anything like it. It was the widest and tallest for years, until Pennsylvania station was constructed.”

We wander past Searcys, and the longest champagne bar in Europe (with heated seats), and pause next to an imposing statue – a tribute to Sir John Betjeman, the saviour of the terminal. In the 1960s it was on its last legs – dark, dirty and covered in soot. “There was no catering except for a rather dodgy burger van and only a couple of trains,” says John.

Poet Laureate and lover of railways, Betjeman was responsible for getting it listed. “British Rail had to do something interesting with it after that,” says John. The eye-catching fi gure was sculpted by Martin Jennings. “Betjeman’s in a typical pose, looking up at the wonderful canopy that he admired so much,” says John. “It’s one of my favourite pieces of public art.” And excerpts from his poems are set in the floor.

Above hangs Tracey Emin’s new neon artwork, I Want My Time With You’. “It’s her comment on Brexit,” says John, “part of the Terrace Wires programme with the Royal Academy. At night it’s magical, the lights are very subtle, they change from blue to pink.”

Above the greeting, the electronically operated Dent clock hangs proudly. It’s not the original; that was sold in the 80s by British Rail to an American collector for £250,000. “But the clock slipped when it was being removed, fell to the concourse and smashed into pieces,” says John. “A man called Roland Hoggard who worked here asked for all the bits, took them home to and put them on the side of his house. When reproducing the timepiece, the manufacturers had something to take samples from.”

At the end of the upper level is a nine-metre bronze statue, the Meeting Place. Designed by Paul Day, it’s a striking centrepiece, and the “old idea that you agree to meet under the clock,” says John. And look carefully – depictions of St Pancras are portrayed on the base, including commuters travelling in, and soldiers back from the trenches.

We end our tour well away from the hustle of the arcade at Fortnum & Mason, whose Piccadilly original was established in 1707.

An exposed brick archway leads us to tables pristinely set up with signature eau de nil crockery, from which we sip St Pancras brew, a blend unique to the station, of high altitude Ceylon with malty Assam.

A three-tier stand arrives complete with dainty, crust-less finger sandwiches, still-warm scones and pastries. Slices of aromatic salmon (smoked on the roof of Piccadilly) on granary, and rich Clarence Court egg on slices of poppy seed, are gobbled before our favourite, a coronation chicken, with its delicately curried sauce.

The pastries bring the afternoon to something of a climax: passion fruit and vanilla mousse atop a crumbly shortbread base, finished with shavings of coconut, and, finally a plain-looking biscuit decorated with a ‘150 St Pancras’ edible sticker, which melts in the mouth, with just a hint of citrus.

Don’t be shy if there are leftovers: we take both the gianduja and orange blossom gateaux home with us.

Open daily 7am (8am Sunday) until 9pm, at 1A St Pancras International N1C