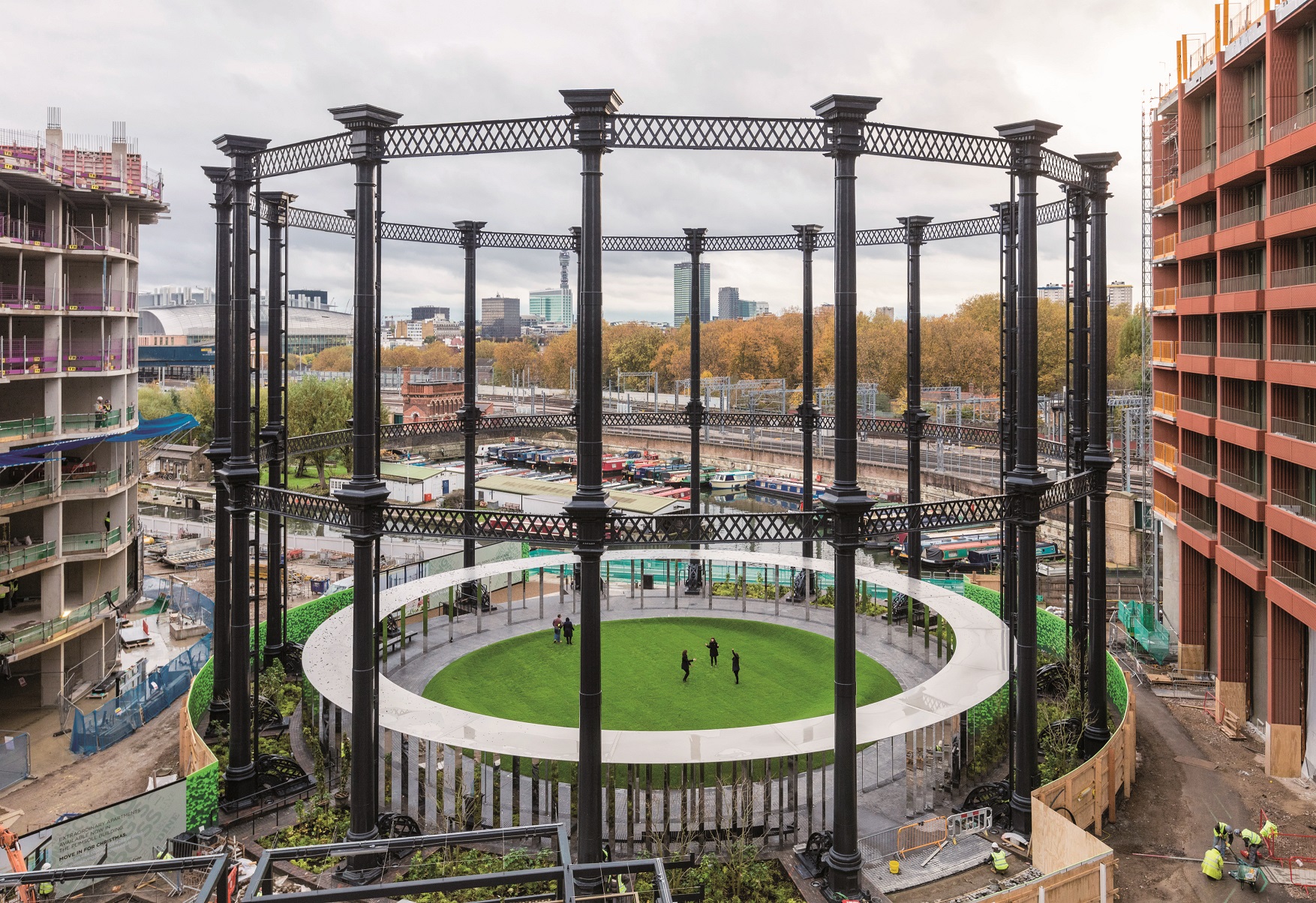 As a brand new public space opens on the canalside, we celebrate brilliantly repurposed gasholders in King's Cross, and beyond

The Victorian structure was moved painstakingly from its original home across the canal to form the centrepiece of the new KX new development. You can read more about that move, the park, the weird and wonderful alternative design proposals and our interview with engineer Morwenna Wilson in previous cover feature A Love Letter to Gasholders.

Meanwhile, did you know that the famous red latticework and black columns that dominated the King’s Cross skyline for years before the gasholders’ careful repurposing was not, in fact, their traditional look?

A microscope study of the base metal discovered 31 different paint schemes from over a century of maintenance, the most popular one being a stone grey. They were sometimes given new colours for events like jubilees, and have been yellow and green in their time, too.

Today, No.8 is black, so as to always be seen as a silhouette. And when re-erected next door, the three returning gasholders known as the Siamese Triplet will all be painted a light blue grey, to make the frame stand out from the glass of the new apartments that are to be housed inside.

Gasholder Park can be found opposite St Pancras basin, a couple of minutes walk from the steps of Granary Square. Free.

Four more brilliantly repurposed gasholders from around the world

A city within the city, featuring hundreds of apartments, a 300-capacity music hall, shopping levels connected by sky-bridges and a thriving online community too. This bold project, completed in 2001, soon became the envy of ambitious urban preservationists everywhere.

Similar in spirit to the King’s Cross project, the Dutch capital transformed its crumbling coal and gasworks into the Westergasfabriek Culture Park, hosting restaurants, bars and music venues. The stunning gasholder is now a jewel in the city’s clutch of world-class nightclubs, home to the epic production spectacle of Awakenings, the legendary full-throttle techno all-nighter.

Dublin’s own gasworks brownfield regeneration project initially attracted the tax-efficient likes of Google, while its gasholder was transformed into 200 swanky apartments, set around a central courtyard. The building hit the skids when the apartments remained unsold in Ireland’s particularly savage financial crisis, but it still stands as a strikingly good reuse of one of these cast iron relics.

Saved from demolition by just a single vote in the city council, this huge structure now plays host to a unique exhibition space. Much like Tate Modern, artists are encouraged to make full use of the blank canvas it presents, both inside and out.