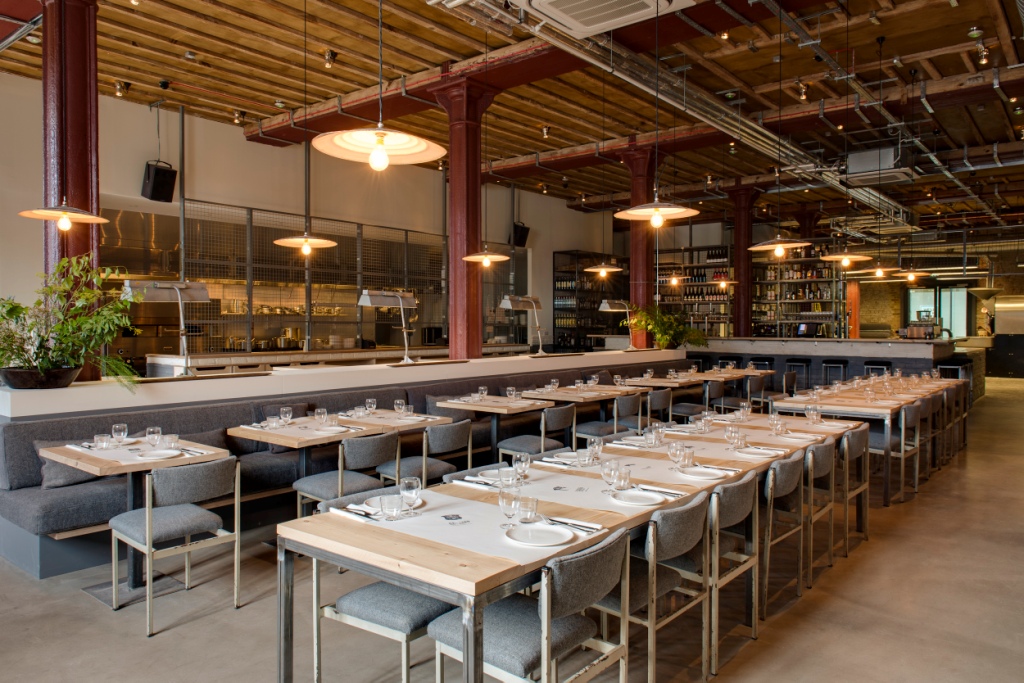 It’s impossible to imagine Granary Square before it landed. But what makes this game-changer so special – and why is it packed all day long?

Caravan is probably the restaurant we’ve eaten at more than any other in the last couple of years. The first rule is that everyone queues like everyone else. And yes, that means waits at most times of day: a recent attempt at a Sunday morning coffee was met with the #middleclasshorror of every table both inside and outside already nabbed. At 11am, no less! Still, brunch is a big deal round here – as it is everywhere.

With its backstory as the heart of London’s 1990s clubbing district, there’s a certain romanticism to the former grain store sandwiched between Central Saint Martin’s and what’s now called Grain Store itself.

Dating back to 1851, its interior still manages to recall a working environment, yet it’s sexy enough to feel like Manhattan, Berlin or Copenhagen. Vast and dimly lit, its kitchen – visible but separated by wire mesh – is a hive of activity, reflecting the couple of hundred-strong crowd at any one point of the day.

The menu is described by the restaurant’s founders (who include Miles Kirby, ex-head chef at Providores, pictured centre, above) as “well-travelled”, and, to be honest, we’ve probably rambled over most of it.

One of the most intriguing items we’ve gobbled at Caravan, however, is scallop carpaccio. Served with grapefruit, ginger, jalapeno and spiced popcorn, it’s a textural delight, its sharp, sweet, and chilli flavours all high-kicking splendidly on the tongue.

With a no-reservation policy before dinner at the weekends, most other establishments wouldn’t be worth the queue. But Caravan is something else (its coffee, for a start, is unimpeachable). Tucking into poached eggs on a smoky bed of light aubergine and yogurt, punctuated by satsouki sausage, is the perfect marriage for hunks of sourdough. Even better are the tender salt beef and crispy potato discs, with oozing poached eggs that, once speared, meet saucily with the hollandaise and wilted spinach. So yes, if you can grab a spare seat, do brunch. Clare Zerny

The menu changes fairly regularly so if it’s not there, it may be back next time you visit. Like seared gurnard, a current fave whose skin is perfectly crisp, enlivened by spiced corn, red onion and sour cream; or rich, buttery Spanish anchovies, smoked over beech wood, and served with salty palm heart brandade and crisp bread.

If this all sounds a bit adventurous for a midweek supper, there’s always the pizza menu: a basic marguerita is £9, or there are inspiring combinations like girolles, kale, braised fennel, and baked ricotta.

Caravan is something of a leveller, too. With the fashion college next door, the owners know it’s important not to alienate a younger crowd with smaller budgets, so the whole experience is fairly laidback (detractors might argue infuriatingly so). Drinkers on any given night crowd the sprawling bar area, sipping affordable-ish drinks (decent prosecco on tap, Camden beer, and aperitifs such as negronis).

Thus, a genuine mix of young and old, locals and visitors, hangs together in a noisy, infectious atmosphere. Service is efficient, speedy, but not overbearing.

Oh, and it doesn’t pay to be too pushy, either. The other day we watched as a tutting woman demanded attention – only to be resolutely ignored by the unyielding barman.