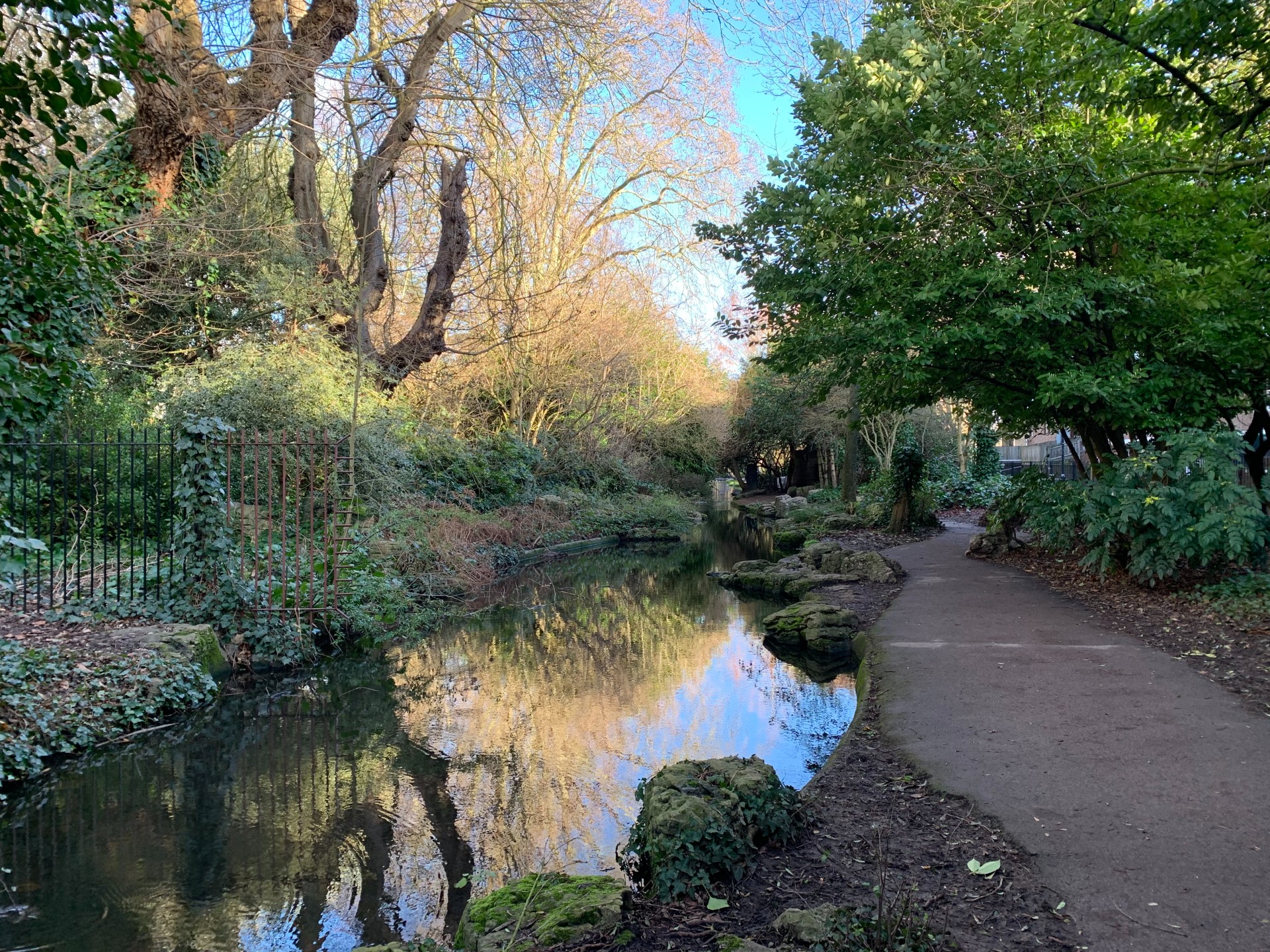 The weather might have been all over the place recently – from crisp, bright spells to snowy afternoons – but rain or shine, we still head out for a daily stroll to get those damn steps in.

It’s always good to broaden your walking horizons, as much as feels right with the current restrictions on ‘local’, that is. A route we happened across on a recent amble from Tufnell Park is the Islington section of the New River Path – a hidden oasis just a stone’s throw from the bustle of where three postcodes collide: N7, N5 and N1.

For some backstory, you have to rewind to the 17th-century, when a 45-kilometre aqueduct was constructed from Hertfordshire to N1 supplying Londoners with fresh drinking water. A welcome secondary benefit was the footpath subsequently built to follow the course of the waterway.

My partner and I often wander the more northern, Woodberry Wetlands section, but the pretty stretch near Upper Street is well worth checking out, too. Head for Canonbury Road – a brief skip from Highbury Corner – and just before the Myddleton Arms turn left onto the waterside pathway.

Enclosed within public gardens lined with craggy arching trees, it’s an effortless meander alongside the crystal clear stream. We spy ducks and moorhens diving beak-first for food. Toads and newts are known to reside there too.

Originally created in 1953, the green space was restored in 1996. Come 1998, it was officially reopened by Princess Alexandra – a relation of both Queen Elizabeth II and Prince Philip.

The ancient watercourse is flanked by impressive properties: leftwards are the sizeable backyards of Canonbury’s ludicrously grand Victorian houses, and to the right an eclectic mix of flats.

Fancy pulling up a pew to take in the scenic surrounds? There are plenty of benches dotted about, flanked by weeping willows and sycamores. Before long you’ll reach a charming wooden bridge, the soothing sound of water gurgling from a nearby fountain filling your ears.

Keep an eye out for the secret den; a sure-fire hit if you’re out with littluns. Beyond that to the right sits The Marquess Tavern – a pint pitstop when normality resumes. We can only dream.

Continue until St Paul’s Road exit comes into view, then head westwards for a quarter of an hour’s hike back to Highbury Corner. Or when public transport is once again an option, Canonbury station is a mere five minutes northwards.

Of course, the walkway can be enjoyed in the opposite direction as well. Either way, it’s a tranquil trail. It may be short, but this leafy gem is worth factoring in as an occasional destination in your ambling schedule.

Got a North London lockdown walk you’d like to share? Email info@gasholder.london or, if it’s NW, info@kentishtowner.co.uk

Can you help? With the sad demise of our free monthly print titles across London last summer due to advertising revenues in freefall, we now need your support more than ever. Every contribution, however big or small, is invaluable in helping the costs of running our websites and the time invested in the research and writing of the articles published. Please consider supporting us here – for less than the price of a coffee. Thank you.