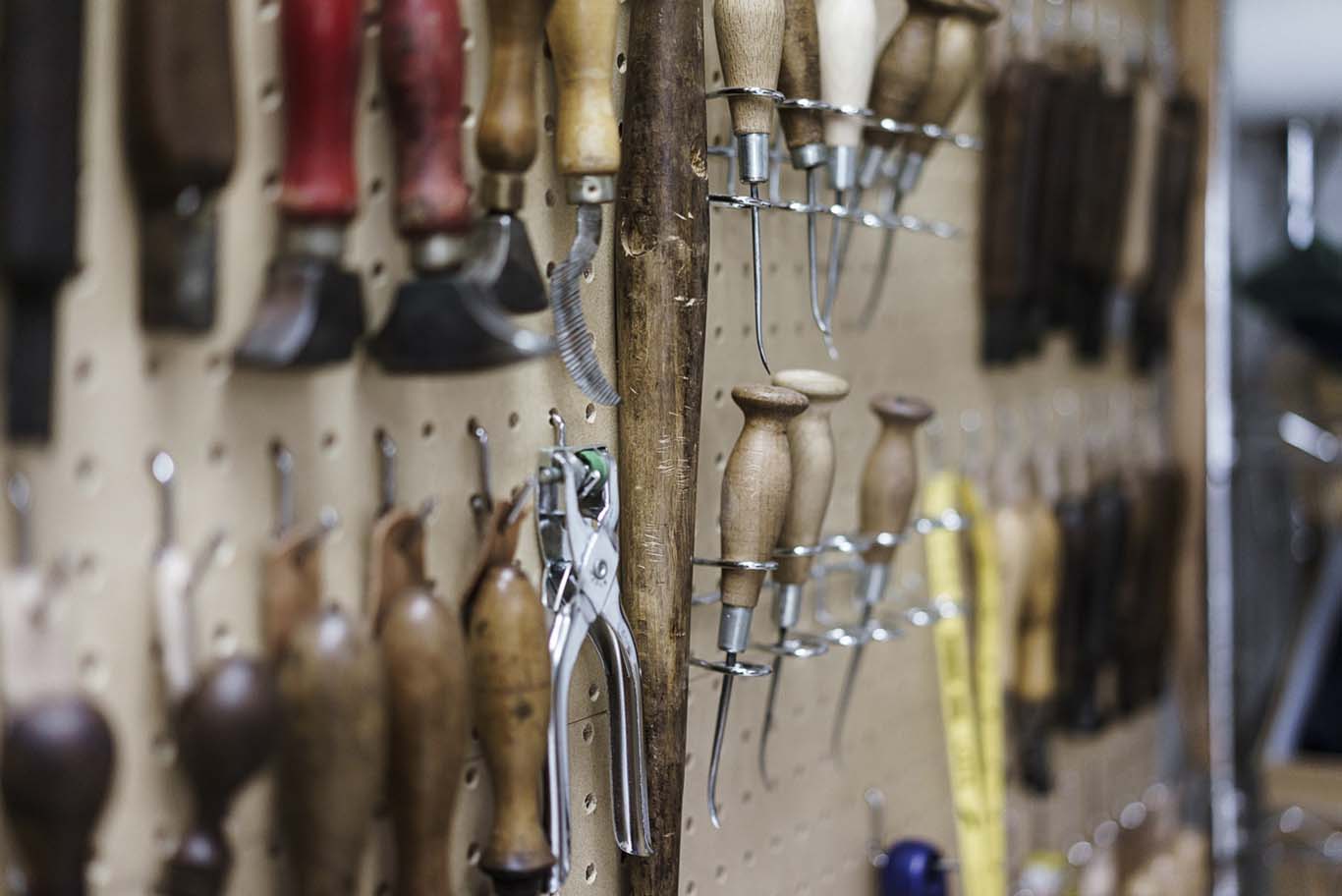 Handmade in King’s Cross: the return of craft to the capital

From Cubitts to Carréducker, we explore the resurgence of artisanal businesses setting up small workshops alongside the area's gleaming new offices


The area may be changing fast, but peer into the back streets of King’s Cross and the effect of decades as one of central London’s least salubrious neighbourhoods can still be felt – thankfully.

Rock bottom rents of old meant that – alongside the hookers, drug dealers and disreputable hotels – the workshops of artists, architects and designer-makers naturally found a home here too.

And while the sleaze has long gone digital, the resurgence of interest in traditional craftsmanship means that – rather than dwindle with the influx of Google, Universal Music and their global ilk – more small artisanal types are gravitating to in the area today than would really seem plausible.

Tom Broughton is busy reviving the art of hand-making spectacles from a cramped room atop the antiques emporium in those red brick arches still standing behind St. Pancras Station.

“We thought it was great at first,” he says, “but actually, getting boxes through here every day without breaking anything has become a bit of an arse.”

Tom’s eyewear company, Cubitts, is only two years old, yet its story is so deeply intertwined with King’s Cross that it feels, not inadvertently, like a brand with a history spanning generations.

Growing up in the East Midlands, his trains spat him out at the station, so it was the first bit of London he knew.

To many “raised eyebrows” even in the early 2000s, he found an affordable flat on Cubitt Street, and immersed himself in the locale’s rich history, discovering that he was living on what was once the building yard of London’s prolific Cubitt brothers (see box below).

Who were the Cubitt brothers?


The work of engineers and master builders Thomas, William and Lewis Cubitt shapes the London we know today. From a modest upbringing in Norfolk, they modernised construction in Victorian times, to be more economical, transparent and reliable, while upholding worker’s rights, too.

Thomas was responsible for the grandeur of Belgravia, the squares of Bloomsbury and Buckingham Palace. He also created the distinctive terraces of Camden Town, Islington, Highbury and Stoke Newington. His brother William built Covent Garden and the original Euston station, while also being an MP.

Youngest sibling Lewis was behind London Bridge and King’s Cross stations, the Great Northern Hotel and the Granary building, now UAL Central St Martins (the new square behind it is named after him).

Broughton was keen to weave the honest principles of those famous Victorian master builders with the solid, industrial reliability of the surrounding urban environment when launching his own line of spectacles.

So each frame is named after a King’s Cross street and the logo, which is also the design for the glasses’ distinctive custom pins, are inspired by the wrought-iron butterfly rivets still visible on the Lewis Cubitt-designed Granary building, now Central St Martins.

“Until 1930s, London was the leader in optical standards,” he tells us. “It was a hallmark of British craft, based just stone’s throw away in Clerkenwell and closely tied to the jewellery and watchmaking trade.” But the UK experienced a strange historical anomaly, courtesy of our National Health Service.

From 1948-92 we were one of the only countries in the world where pairs of glasses were given away by the government.

“The whole nation essentially wore one of only seven styles,” says Tom, “spectacles were seen as a medical device, rather than building demand for independent designer brands as in places like Holland or Denmark, which have an amazing eyewear culture. We’ve taken that baggage with us for a long time, and it’s only just beginning to change. I’m keen for Cubitts to be the antithesis of the mass produced high street glasses experience, where you are in a horribly lit store, with loads of pushy upselling.”

Instead, he’s focusing on the small-scale marriage of craft and innovation. That means experimenting with custom facial scanning software and 3D printing of frames, alongside traditional acetate carving and lens polishing techniques.

Against the received capitalist wisdom, being small actually helps keep prices down. “Our input materials are relatively cheap,” says Tom, showing us a two euro slab of beautiful Mazzucchelli acetate from Italy, renowned as the best stuff in the biz from which to whittle a quality pair of specs.

“By doing everything ourselves we cut out all the costs that different agents place on top of a high street pair,” meaning bespoke and handmade ends up being more affordable than uniform and mass produced.

The same can’t be said of all artisanal products originating in the area though. Carréducker produce bespoke shoes from a workshop at Cockpit Arts across in Bloomsbury. From its base in an old tenement block, the trailblazing social enterprise charity nurtures and supports a cluster of exceptionally skilled designer-makers, providing vital studio or office space and support services to help get them off the ground.

Deborah Carré and James Ducker custom-make their luxury spats, loafers and brogues using only traditional techniques, for sale at the finest gentleman’s outfitters in Mayfair. Here, time and handiwork certainly do cost more, but that doesn’t mean the economics of running their business are any less finely balanced.

“When we founded the company in 2004 we were looking for a central London location, but also an affordable rent,” says Deborah, of that seemingly tricky perfect prerequisite. “Cockpit provided that then, and continues to be a fantastic option for small craft based businesses today. Being in this area has its own flavour. It’s central yet still very residential, so retains a local feel. It is also very beautiful and the history is inspiring for creatives like us.”

Their shoe-making skills may be resolutely analogue but, (as with Cubitts, which launched as a web-only company from Tom’s flat, before the recent addition of its first shop, in Soho) digital is essential to the survival of modern day artisans like Carréducker.

“We make amazing shoes in an amazing way, but getting in front of potential customers is still tough” admits Deborah. “Fortunately, being part of an online world helps as 75% of our customers are from abroad, so the whole planet is a potential market for us. Our key challenge is being heard above the noise.”

Back in the ached confines of the Cubitts workshop, amidst higgledy boxes of acetate and the whirring soundtrack of fine-grained polishing, Tom tells us about his own shoe-making side project, this time one with bona fide linage: reviving his great-great-grandfather Elijah’s Broughton Boots brand.

The Kickstarter-funded project has been a success, but the complexities of assembling footwear by hand, compared to the simplicity of eyewear, have been a real challenge, from sourcing different cuts of leather to the costs of producing a range of sizes.

And spectacles are certainly dominating his time right now. “I’m keen to keep growing the more innovative side to what we do,” he says, which includes a nifty folding case, and weird concept frames made out of rusting metal, marble, concrete and even compressed milk. But the main thing is to grow in a way that doesn’t compromise the strong Victorian principles of the business he started in that King’s Cross flat, not so very long ago.

“Glasses are so ubiquitous, 69% of the population wear them, which is such an enormous market we only need to carve out our own little niche.”

And though Carréducker are moving into a ready-to-wear range, their business – complete with its fine shoemaking school – is never going to be looking for huge scale, either.

Local artisans are happy to be able to do what they love, and are positively blossoming in this part of town in 2016. Forget all you hear about our prohibitively expensive city squeezing out all the local character.

Cubitts eyewear is available from their website or retail workshops in Marshall St, Soho, W1F and Park St, Borough, SE1.

Carréducker bespoke shoes and shoemaking courses can be found at via their website and for sale at Gieves & Hawkes, 1 Savile Row, W1S