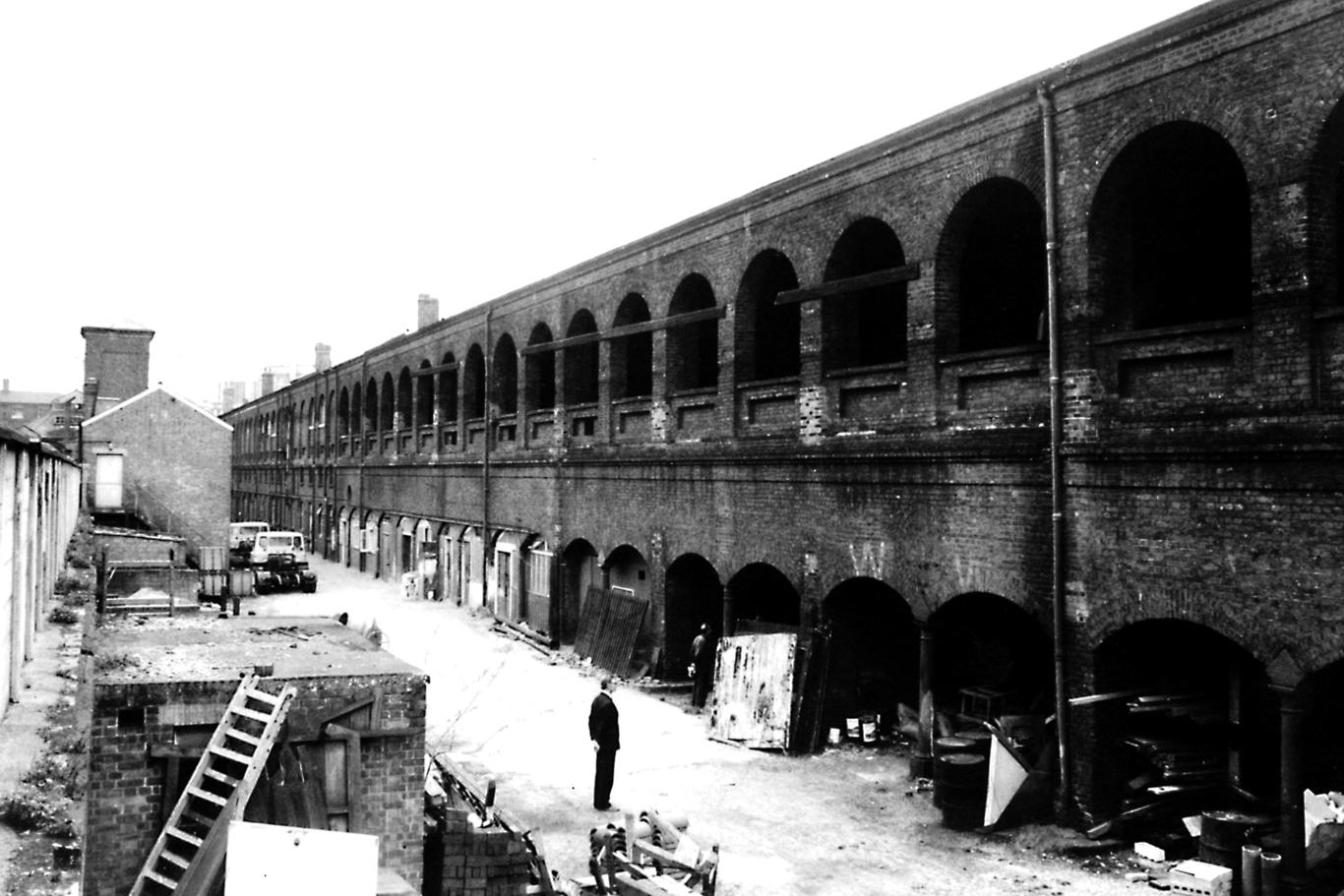 Historian, civil engineer and economist Peter Darley founded the Camden Railway Heritage Trust in 2007. He’s already written an authoritative book on Camden Town’s own large goods yard, and his latest opus, about the railway lands of King’s Cross, is now published. In these extracts, he reveals why this ambitious Victorian infrastructure looks as it does, and the early decades of heavy industry that took place right here.

oal Drops Yard is part of the former King’s Cross Coal Depot, established in 1851 alongside the Regent’s Canal. The first facilities were the Eastern Coal Drops and the Coal and Stone Basin, together capable of handling 1,000 tons a day. They were very significant in the first rail-borne delivery of the fuel to London.

The general raising of ground level around the main goods sheds required a retaining wall along the canal, providing the opportunity to construct stables below the higher-level road, which became known as Wharf Road. Canal barges passed under the raised towpath and Wharf Road to enter the Coal and Stone Basin, a small dock with railway sidings alongside. It had coal drops serving barges, and sidings for stone traffic. The tunnel entry can still be seen at St Pancras Locks.

At the triple-level covered Eastern Coal Drops, the blocks were discharged from wagons through bottom doors into storage hoppers located above the ground-level bays, where the coal was bagged up, and into which merchants’ horses and carts could be backed for loading. Traversers were provided in 1865 at the southern end to transfer empty wagons to flanking viaducts for return. Open arches on either side let out the coal dust (see image above).

However, Samuel Plimsoll found that these drops tended to break the soft coal that he traded and, after trials, he built a new set of patented drops on the opposite bank of the Regent’s Canal at Cambridge (now Camley) Street, where he had acquired land from the Ecclesiastical Commissioners. The Plimsoll Viaduct was erected to carry the railway across the canal to Plimsoll’s coal depot. The inwards and outwards tracks of the viaduct were graded to facilitate movement of full and empty coal wagons, creating a level difference between the two tracks.

The first coal was consigned to Samuel Plimsoll’s sidings in July 1866. Over time, trade moved increasingly to Cambridge Street, and to level sidings in the goods yard where coal was handled manually, largely to avoid the fragmentation and wastage caused by the original drops. This shift in trade allowed part of the Eastern Coal Drops, during 1875–76, to be converted into five warehouses to meet a demand from traders for accommodation. This policy was applied to the fifteen southern pairs of bays, leaving the ten northern pairs largely unaltered as coal drops. The first block was let to Bagley, Wild & Co, a bottle manufacturer.

Before the recent transformation of the site, many of the historic buildings had stood empty and unused, not only subject to neglect but increasingly vulnerable to accident, vandalism and arson. The ten northern bays of the Eastern Coal Drops were badly damaged by fire in 1985. Happily, 1985 also saw the former Cambridge Street coal drops transformed into Camley Street Natural Park.

The regeneration of historical features at King’s Cross over the last ten years, of which the opening of Coal Drops Yard is such a significant milestone, has shown how the industrial past can be respected and celebrated to enrich our future.

The King’s Cross Story: 200 Years of History in the Railway Lands, by Peter Dalery is available now via the Camden Railway Heritage Trust. Contact them here.