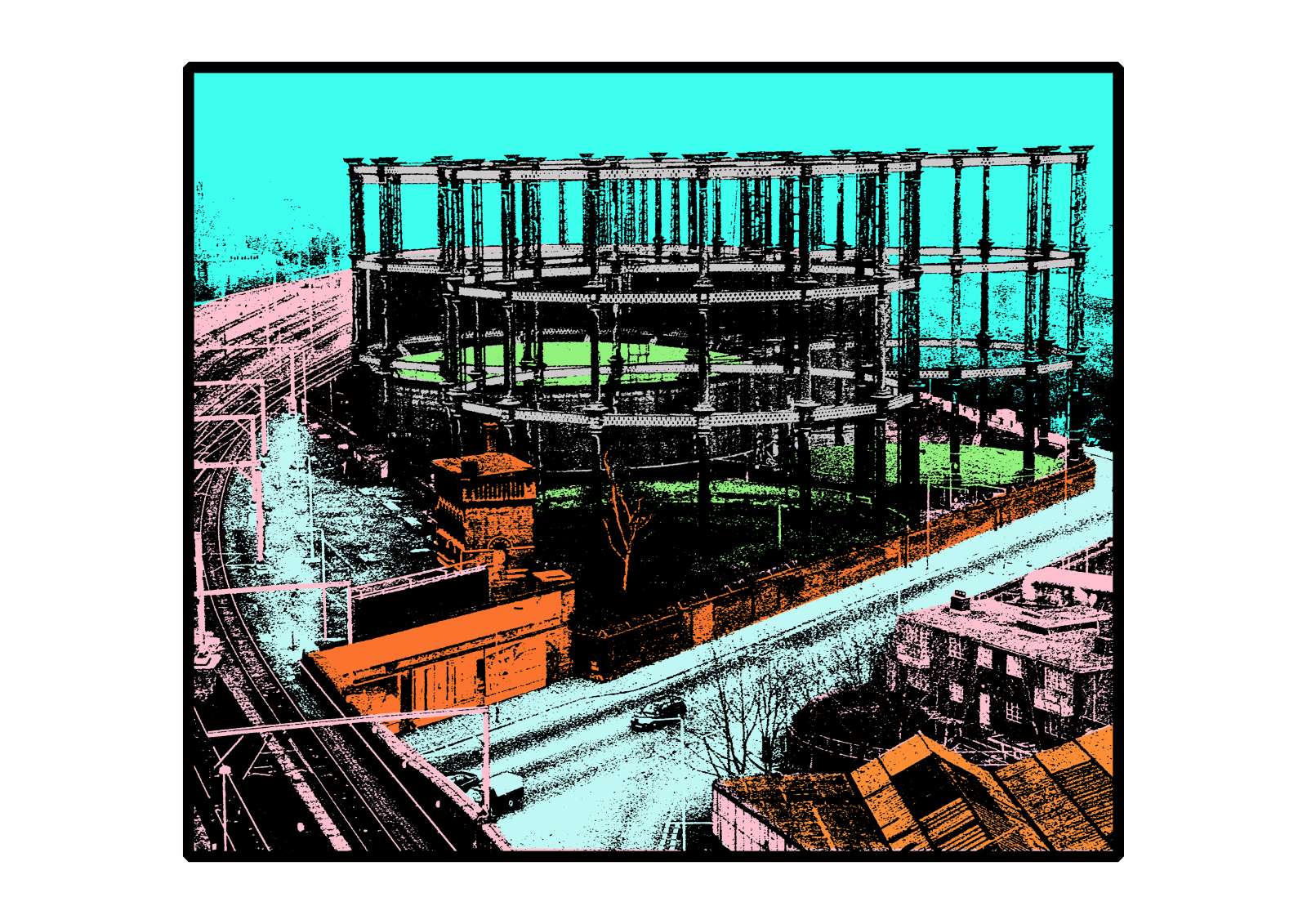 The iconic gasometers which dominated the skyline at King’s Cross are the focus of new artworks created during the pandemic lockdown.

The entrancing images can now be viewed at on the newly launched website of respected photo-journalist Rick Matthews (disclaimer: I’m his wife).

Rick spent 15 years working in London while living in Stoke Newington during the 1980s and 90s. His original black-and-white images of the landmark King’s Cross gas holders were taken from the rooftop of the neighbouring Pancras buildings, while he was covering the start of work on the restoration of St Pancras station site for a regional newspaper group in north London.

During this summer’s lockdown Rick re-discovered the images and injected them with new life. He stripped back the photographs to basic outlines before reintroducing vibrant splashes of colour, reinterpreting them to create a more upbeat mood.

“I recall it was a dreary, grey day when I was on that rooftop,” he says. “The light was not good and the scene was looking pretty drab, but I knew I had to get some shots anyway so I persevered and took some panoramic views. Unearthing them I was struck by how much the area has changed in what seems to me like the blink of an eye.

“It’s always been such a bustling, colourful area of London that I felt for it to be a true reflection of the times the scene needed to be more animated than the grey story those old pictures portrayed. So I was inspired to use some artistic licence.”

Rick studied art for seven years before embarking on a professional career behind the lens. As a press photographer of more than 30 years and latterly as a freelance photo-journalist he has worked on commissions all around the UK.

But he started out as a young recruit working with one of the world’s founders of modern photojournalism, Simon Guttmann, at the acclaimed Report news agency on Oxford Street.

He eventually transferred to Report’s Glasgow agency, but seven years later returned to London as a freelance photo-journalist mainly covering the north London areas of Hackney, Islington and Camden.

His new website also includes some of his original photos – telling black and white shots captured around London in the latter days of the 20th century, including Notting Hill Carnival, candid street scenes and people portraits.

He has always harboured a particular love of photographing industrial landscapes and scenes of social dereliction and reclamation.

It was this passion which prompted him to produce the new gasometer series of artworks, starting with King’s Cross, during the sobering days of lockdown.

“After years of promising myself that I would build that all important website which self-employed people are advised to have, but never getting round to it, I suddenly had time to do it,” he says. “But I did get a little side-tracked along the way,” he laughed.

He dug out all his old negatives from years back and rediscovered some images of industrial scenes which are now long gone. “I was delighted to find the gasometers and work on them. I don’t know why but I’ve long been fascinated by the dramatic silhouettes of gasometers on the landscape. Most in the UK have now been demolished but I’d love to capture the remaining ones before they’re lost forever. Call me crazy but I have a strange fondness for them.”

Rick eventually hopes to exhibit his latest work, but for the time being those plans have been put on hold due to the impact of the coronavirus pandemic.

“Given all this trauma and turbulence,” he says, “it has been therapeutic getting a collection together and it would be nice to think that the gasometer prints especially could one day be put on a public display local to their home turf. But that’s difficult to achieve while the pandemic is still rife. So for now I have to be content with creating new art whenever I can.”

If you have enjoyed reading this, or found it helpful, please value the time and effort that has gone into writing it. With the sad demise of our free monthly print titles across London last summer due to advertising revenues in freefall, we now need your support more than ever. Every contribution, however big or small, is invaluable in helping the costs of running our websites and the time invested in the research and writing of the articles published. Please consider supporting us here – for less than the price of a coffee. Thank you.