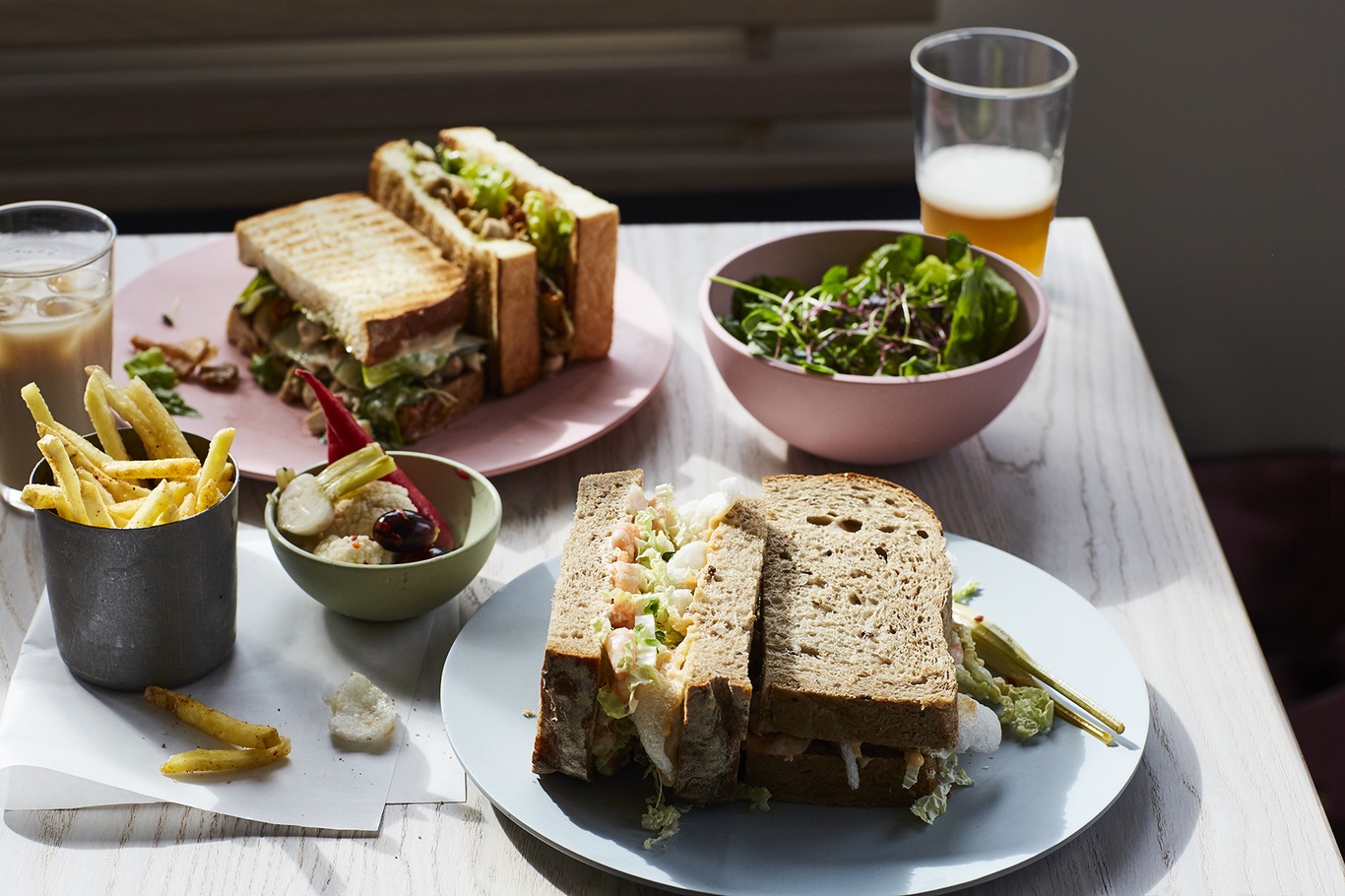 Like almost everyone else, on the rare occasions we’ve dined at Hackney’s acclaimed Michelin-starred Pidgin, we’ve thoroughly rated it in every way.

But we didn’t expect the next move for owners James Ramsden and Sam Herlihy to be a humble sandwich shop.

This being Coal Drops Yard, however, Sons & Daughters is no ordinary caff to pick up a bacon butty.

Named after their children (so it says in the blurb) it’s Ramsden and Herlihy’s attempt to “celebrate the sandwich in all its glory”. At the helm is head chef Jacqueline Barbosa – previously of Mayfair’s Guinea Grill gastropub.

Fashionably open all day for breakfast, lunch, dinner and drinks, both boozy and virtuous, the menu features just six sandwiches, ordered fast-food style at the counter from an illuminated menu above.

Swerving a trio of tempting-sounding options – chicken with pickles, spicy lamb merguez and mortadella ham with taleggio – I plump for the staff recommendation, a fishy number.

And it’s a cracker. Cornish prawns come in a slick of spicy mayo, with textural contrast in the form of prawn crackers, a whole lotta napa (Chinese) cabbage, and a delicate hit of heat from pickled ginger and jalepeno vinaigrette. The whole shebang is stuffed generously between two thick slices of granary bread from Paul Rhodes Bakery, a huge doorstep affair in fact, arriving tantalizingly wrapped in paper.

So far, so delicious. The learning? Well, it’s almost too big, unless you’re absolutely ravenous: if there’s two of you, it might be better to share one sandwich and order an accompaniment of fries (with sriracha salt), plus a side salad to up the vits. The latter is recommended, a zingy affair of gem lettuce, roasted pumpkin seeds, cress and cider vinaigrette.

Next time I’d try their take on an egg salad, whose killer ingredients are miso mayo and truffle crisps. And there’s also a tastebud-tingling vegan offer for the plant-based: tenderstem broccoli with mushroom, cashew cream and spiced coconut.

At lunchtime, the L-shaped interior – with its functional stainless-steel touches, banquettes and small eat-at counter (whose stools just need a footrest) – is packed with the office crowd; in the evening it’s dimly lit with bar snacks and a focus on cocktails and their zeitgeisty non-alcoholic equivalent.

And of course you can always swerve the sarnies and just swing by for a smooth Climpson & Sons espresso. (Though we didn’t indulge in the sweet stuff, the counter heaves with cakes and pastries, including cherry danish, cinnamon scroll and flourless chocolate cakes.)

So, is this the best sandwich shop in the capital? In a city as sprawling as London, the answer can only ever be subjective (and Max fans would certainly dispute such a claim). But Sons & Daughters is certainly one of the most imaginative.