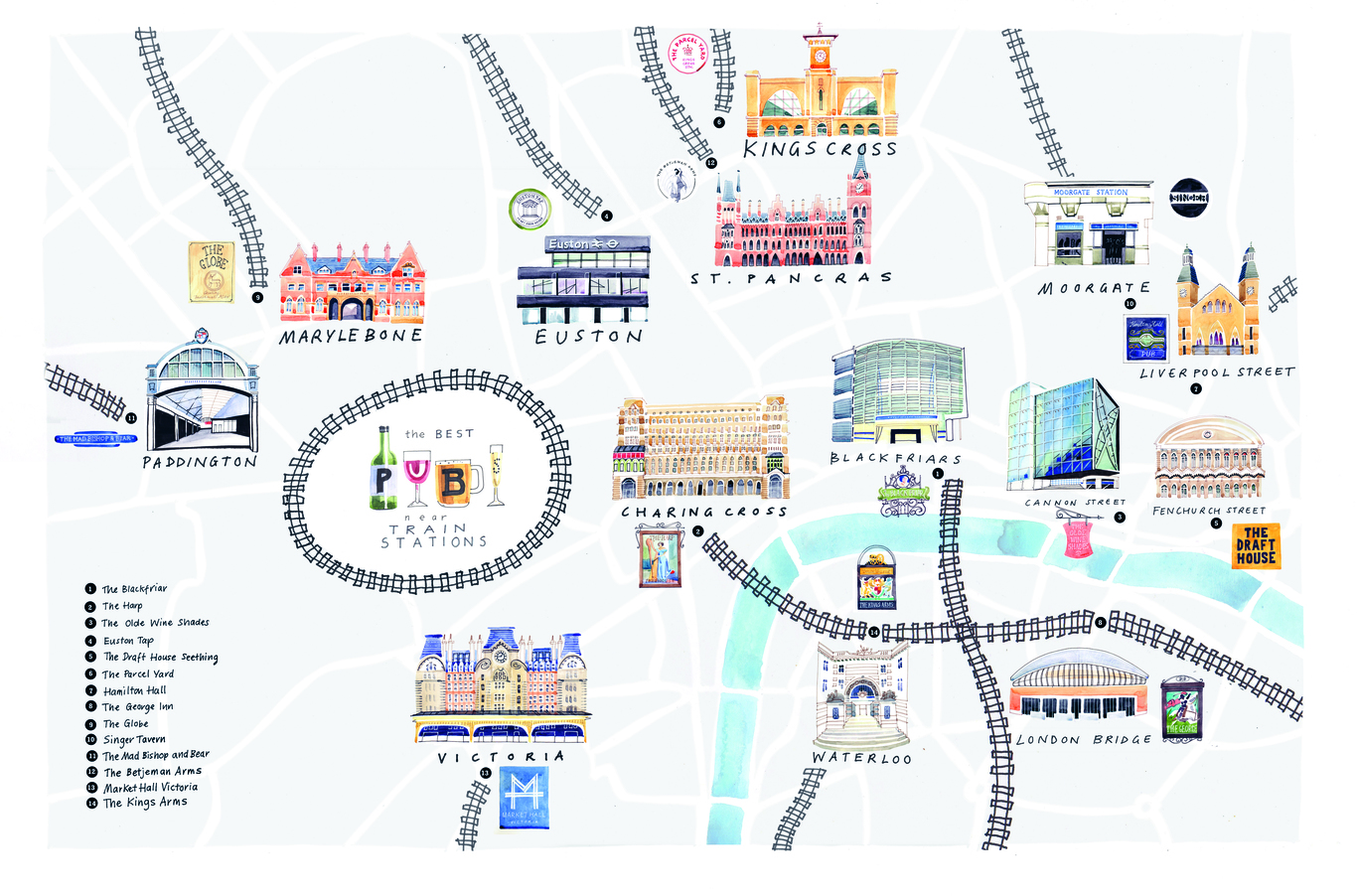 Most Londoners probably think they know a bit about the capital’s drinking scene and, even perhaps, the city’s rich drinking history.

But the Londonist blog – which has been going for 15 years – is better informed than most (us aside, natch).

From pub crawls soaked in history and curious cocktail recipes, to the best bars from the pages of fiction, their new book Londonist Drinks is worth picking up for a potential libation-crazed relly this Xmas.

The hardback tome is packed full of hand-drawn maps and drawings from up-and-coming and established illustrators based in the UK (such as our main image, above), the idea to inspire some new evenings out.

Below are seven top places to meet – as befits this title, north of the river  – for a tipple by major rail stations. You’re welcome.

Blackfriars: The Blackfriar
Take a mere two-minute walk from Blackfriars station to The Blackfriar, a unique wedge of a building with an interior to rival Sainte-Chapelle with its stained-glass windows. Known unofficially as a waiting room for Thameslink ’services’, this pub will have you in awe at its murals, sculptures and not to mention its brilliant beer choices with up to eight cask pumps. 174 Queen Victoria Street, EC4V 4EG

St Pancras: The Betjeman Arms
The Geronimo franchise brings traditional architecture to an otherwise modern interior at The Betjeman Arms in St Pancras. The piece de resistance of this station pub lies in its three back rooms, with Instagram-worthy décor, fantastic food and gorgeous plush seats. You’ll never leave. For fans of people-watching, sit ‘outside’ to watch the Eurostar come and go, and admire the station’s famous roof. St Pancras Station upper level, N1C 4QL

Liverpool Street: Hamilton Hall
Hamilton Hall (with an entrance within Liverpool Street station) can be best described as an upgraded Wetherspoon. If that’s music to your ears, this former banking hall turned pub will leave you giddy with its period décor and brilliant range of ale. If you’re an early bird, set aside a day at 7.30am for a fantastic view of City boys necking pints to get them through the day. Liverpool Street Station concourse, EC2M 7PY

Euston: Euston Tap
Over on Euston Road, housed within two separate buildings is Euston Tap, a pub that boasts more than 40 lines of craft ale. It must be one of London’s best-stocked bars. This is particularly miraculous, given the shortage of space, but, head up the wrought-iron spiral staircase to find more seating and, most importantly, the city’s tiniest toilet. A unique and unconventional pub. 173 Euston Road, NW1 2AX

Paddington: The Mad Bishop & Bear
Raised several levels above Paddington concourse and with a name strange enough to be the title of an Oscar-winning indie film, The Mad Bishop & Bear is a delightful pub that benefits from a recent makeover. The name recalls a wealthy clergyman who sold the land the station is built on, and the bear from Peru who took the station’s name. It’s a Fuller’s house, so you can expect the usual run of beers and better-than-average food. Bar to platform: 2 minutes (if you walk down the escalators). Upper floor, Paddington Station, W2 1HB

Fenchurch Street: The Draft House
If you head south a few blocks from the station to Seething Lane, you will find The Draft House. The venue doesn’t stray far from the winning formula found in its sister branches — with a vast range of keg beer (and a few casks) served from a shiny metallic counter. Since a huge BrewDog opened round the corner, the place is a little quieter too.
14 Seething Lane, EC3R 5BA

Charing Cross: The Harp
Take a five-minute walk from Charing Cross station to a regular winner of CAMRA awards: The Harp. If the narrow downstairs bar is chock-full of tipsy folk, try the charming sitting room upstairs. Known for its monumental range of cask ales and hand-pulled tipples, this is arguably the best traditional pub in the West End. 47 Chandos Place, WC2N 4HS

This article is an edited extract from Londonist Drinks: A Spirited Guide to London Libation (AA Publishing, £16.99), edited by Matt Brown and Will Noble, onsale now.