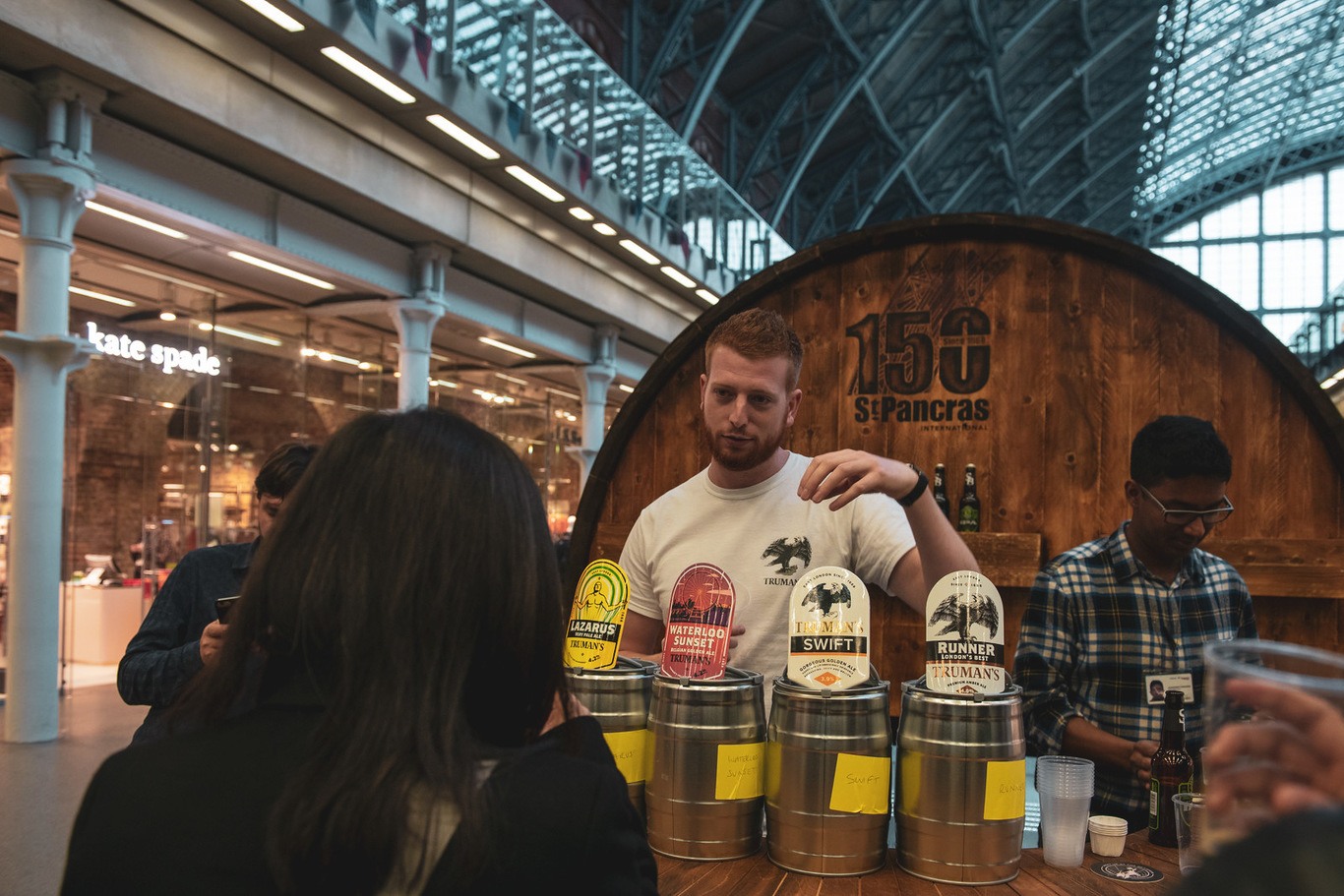 St Pancras Beer Festival is back for 2019

We speak to some of the breweries and retailers behind the event, offering a chance to sample great beer - and a lot more besides - in a glorious setting

ctober has always been a brilliant month for drinking beer. Yet visitors to St Pancras International don’t need to hop on the Eurostar bound for Bavaria to sample some of the world’s best brewing.

As part of the station’s 150th anniversary celebrations last year, organisers thought it a good idea to honour the famous Barlow Shed’s unique design, where the undercroft (that now sees passengers arriing from Paris) was originally measured precisely to fit barrels arriving on special daily beer trains from Staffordshire.

The St Pancras Beer Festival was such a success it’s back for a second year, with involvement from concourse pubs The Betjeman Arms and The Barrel Vault, plus Sourced Market and a host of London craft brewers too.

“When we started only seven years ago, there were probably 30-40 craft breweries in Greater London,” says Portobello Brewing Co’s Joe Laventure. “Now there are something like 130.”

This explosion in craft beer-making has been great for Joe and his family-run team, who remain proudly independent to this day. You can find them at the stall offering samples of their popular Notting Helles beer, that Barrel Vault proprietors Wetherspoons have just put on tap for the next six months.

You’ll also be able to sample their Westway Pale Ale and maybe pick up a t-shirt, and Joe promises the beer will be about as fresh as it’s possible to be too.

“We mostly offer bottles and cans for the festival, as draft is difficult to arrange at the stand. So instead, I go to our tanks each morning and draw special 5-litre mini barrels of our latest brews for sampling at St Pancras.”

Beer enthusiasts should tune into Hoxton Radio this Friday (11th October) for an all-day beer special broadcasting live from the station.

Meanwhile look out for your chance to join Sourced Market for some unexpected beer and food pairings at the Beer Festival stand, as their resident beer and wine expert James Russen reveals.

“We will be pairing a pilsner from Peckham’s Brick Brewery with Sourced’s famous cheese and onion toastie,” says James. “I’m a big fan of caramelised onions, and they work really well with the maltiness and high carbonation of the pilsner.”

“Sours like Salty Kiss are all the rage right now,” says Russen, “and this pairing works really well. Basically we’re just trying to broaden people’s perspective on drinking beer with food. I love talking about both, so the St Pancras Beer Festival is ideal for me, and also highlights what we do every day at Sourced Market, which is showcasing the best of small British producers.”

In fact, tasting events can be stumbled upon most Friday evenings at Sourced at St Pancras – just turn up and see what’s on offer, or check their Instagram for the heads-up.

Both of these beer fans agree they’re really excited about the 2019 Beer Festival.

“Being here at St Pancras again is great platform for us, if you’ll excuse the pun,” laughs Portobello Brewing’s Joe.