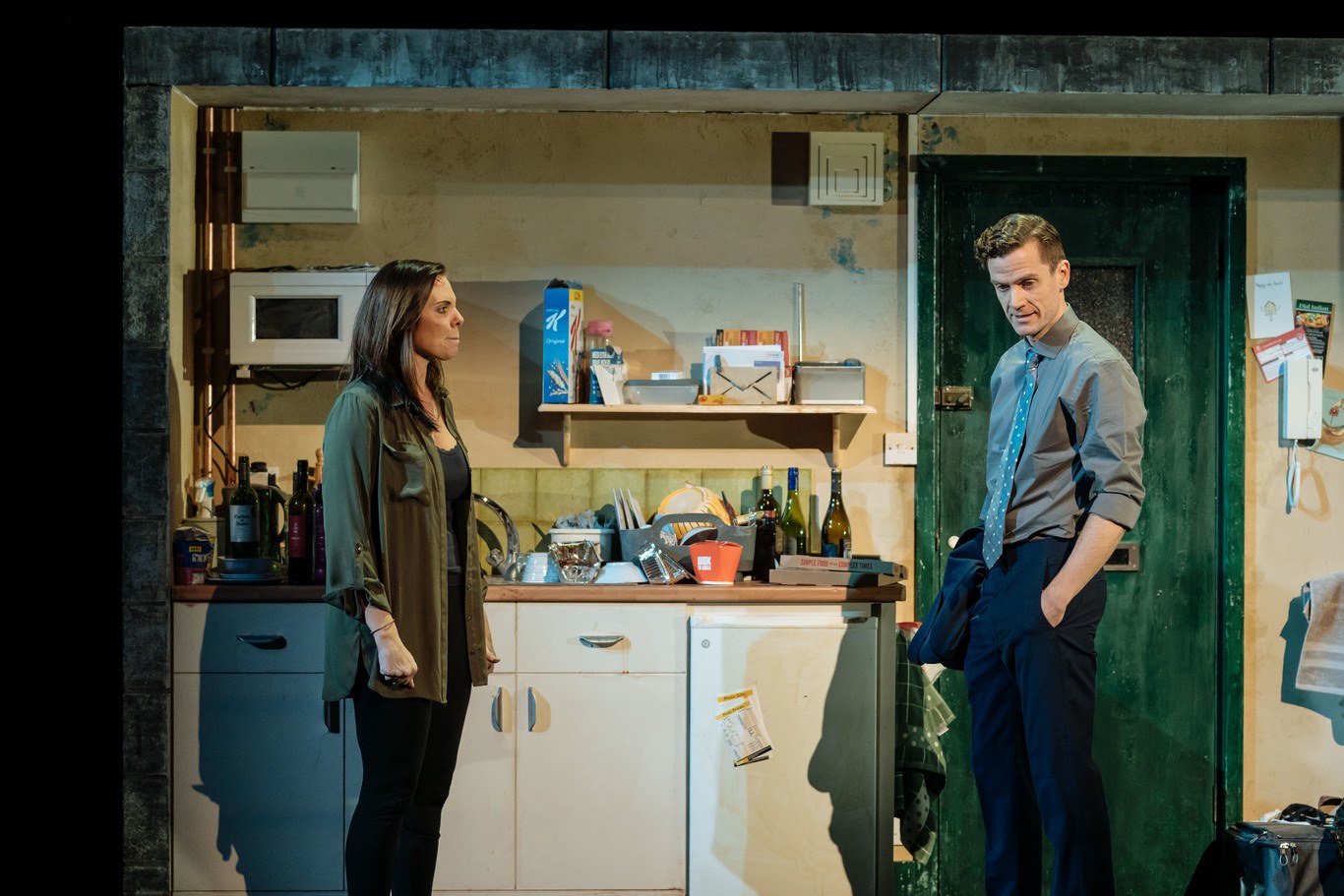 The Girl on the Train review, Duke Of York’s Theatre

The stage adaptation can't quite capture the novel's singular punch

It’s that rare proposition, at least for a thriller, with no less than three incarnations – smash hit book, movie, and now theatre adaptation.

In this new stage version by Rachel Wagstaff and Duncan Abel, former soap star Samantha Womack plays alcoholic loner Rachel Watson, whose only escape is the glossy couple she spies through the train window every day. When she learns that the woman has vanished, she finds herself as witness and then suspect.

From the opening scene we’re straight into the disappearance of Megan Hipwell (a wistful Kirsty Oswald), rather than the book’s astute mood-setting opening chapters, which outline Rachel’s propensity for cans of gin and tonic on her Monday evening commute.

Yet nonetheless, swigging back wine by the bottle in her kitchen, as she is confronted by her prosaic ex Tom (Adam Jackson Smith), Samantha Womack captures Rachel’s fragility perfectly, with a persistent slur, tipsy facial expressions, lank hair and comfy, shapeless clothes.

Throughout, James Cotterill’s gritty/glam set design and director Anthony Banks’ pacy scene changes pile on the atmosphere, the only letdown being the low-key presence of the titular train itself, despite one quite mesmerizing German Expressionist-style sequence.

But the biggest surprise is that there are laughs too, many provided by joker DI Gaskill (Alex Ferns). In fact, the audience positively hooted at some of the lines – the humour sometimes derived, it should be added, from the preposterousness of the plot.

While the book’s compelling themes of social alienation, memory, truth and interpretation are all present and correct, the play highlights what happens to many adaptations of whodunnits: the bare-bones plot makes the final revelation too swift and – in oxymoronic fashion – both obvious and unbelievable at the same time.

With its nods to Hitchcock and Agatha Christie, the old-fashioned feel is even more apparent on stage. Yet the script’s philosophical moments occasionally have the elegiac air of, say, Gatsby: there’s a universal truth of someone who’s alone, watching people she fantasises are perfect – only to discover their flaws.

By the denouement, the real reveal is that Rachel Watson as sharp and frail as a slightly sozzled Miss Marple. Whether the show has the longevity of the latter’s creator, however, remains to be seen.

The Girl on the Train runs until 17th August at Duke Of York’s Theatre, St Martin’s Lane WC2. Tickets here