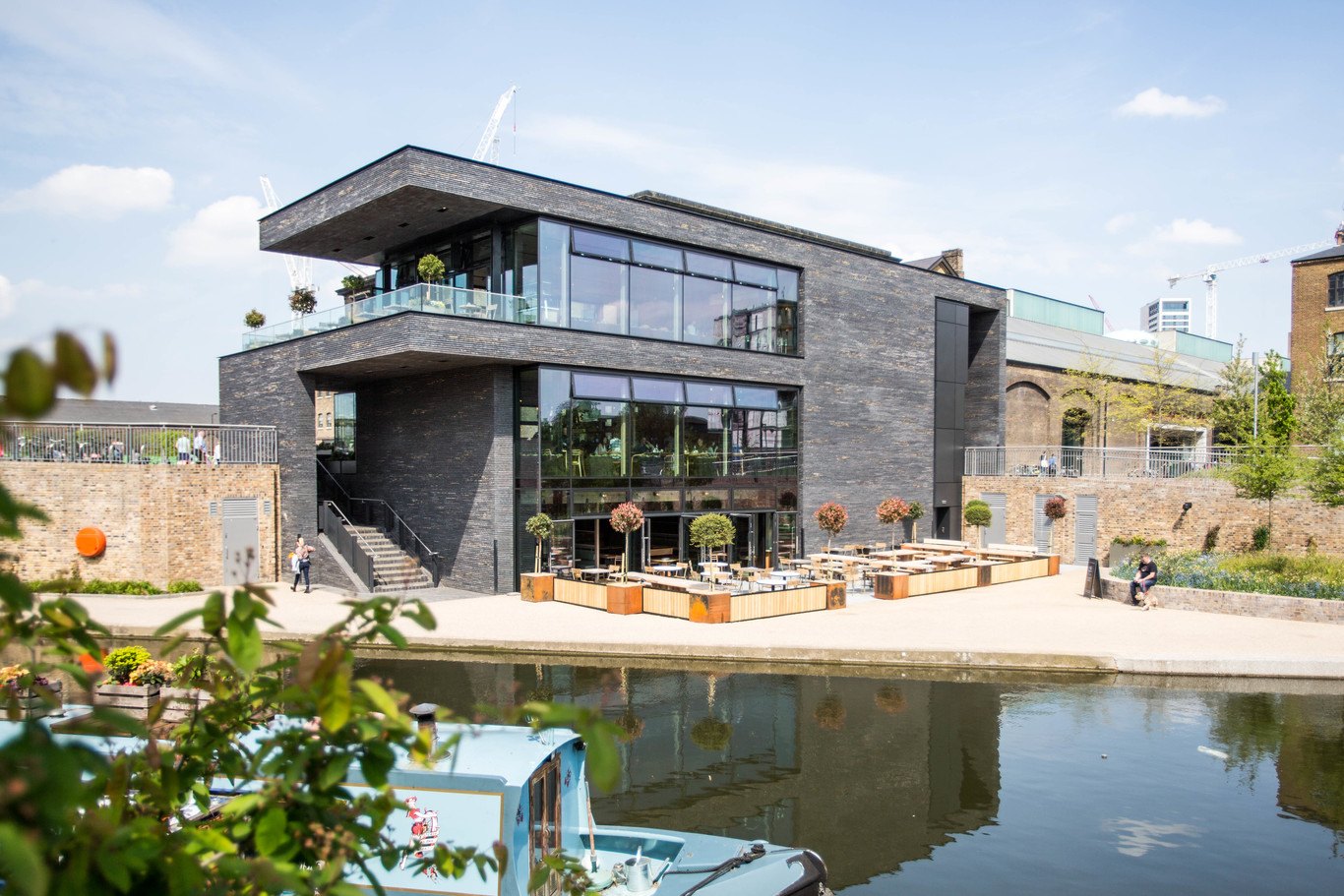 So you’ve never been to…The Lighterman

Age: Three years old. Wow, that went quickly: in fact, it doesn’t seem long ago that it was a building site, which we’d gawp at every time we passed, trying to imagine how it’d look when finished. As for the name? It’s so-called after the Victorian workers who operated ‘lighters’, flat-bottomed goods barges, on the canals (and the Thames, for that matter).

What exactly is it? A three-storey striking pile designed by architects Stanton Williams as a “single sculptural form”, cleverly straddling both the canal and the majestic fountains of Granary Square. So you can soak up baking hot sun (not to mention purple-hued sunsets) from its western terraces, with cosy waterside drinking on its lower eastern levels. An attractive flight of steps connects the two.

OK. What goes on there? Drinking and eating, of course, with slightly different nuances on each level. The water-level bar and canalside garden are most boozy, followed by the terrace on Granary Square and its adjoining glass bar. Upstairs is the more rarefied restaurant, with wraparound balcony and the best city views.

The interior: discuss. Think untouched concrete walls, pale floorboards, floor-to-ceiling glass. The only point? The acoustics can be challenging: a gang of snappily-dressed kids were shrieking their way round one table in the dining room on our visit, the parents oblivious to the painful decibels inflicted on other diners.

What should I eat? Well, they’ve just launched a new spring menu which features seasonal dishes, such as poached salmon with asparagus salad, and Waveney Valley pork chop with roasted garlic and caramelised apple sauce.

But we want Sunday roasts! Yep, they’ve also had a revamp– which had our name on it the other sunny weekend. Warning: they’re some of the most gargantuan plates we’ve seen in recent memory. Half a free-range Windsor spit roast chicken (see below), its skin blackened, flesh soft and tender, was just outdone by fulsome slices of grass-fed Galloway beef sirloin. Arriving as-requested pillowy rare, the meat straddled crisp-yet-fluffy roasties, slippery fingers of carrot, a heap of tenderstem and a whopper of a Yorkshire. And the whole lot was swamped by a gravy lake, a pot of horseradish on hand to add fire and cream.

Yikes. Should we skip starters? Yes, unless you’re excessively hungry (on a Sunday, anyway). We thought we were ravenous after a morning walk – and devoured bread and butter as we sat down, alongside small plates of crayfish, crab and avocado and crisp fried polenta cake with bright-yellow saffron fennel and earthy beetroot. My partner was so stuffed when it came to the mains we had to doggy-bag his unfinished to take home.

To drink? Usual craft beers aside, there’s a seasonal cocktail list that’s heavy on the gins if that’s your thing (with pairings like rhubarb and hibiscus). The wine list goes upwards of £6.50 a glass (£24 a bottle); an easy, slightly chilled Brouilly clocked in at £35.

What’s the service like? Laidback yet warm: we were served by a few different people, but each was smiley and knowledgeable (and a waitress happily wrapped our leftovers, saying she would do the same herself).

Do say: ‘This has the best views in King’s Cross.’

Don’t say: ‘Can I get a quiet table, please?

The Lighterman is serving East Anglian herb-marinated lamb shoulder (as well as the other roasts) on both Easter Sunday and Monday. For more info and to book head here. Sunday roasts £16-£23, open daily, Granary Square N1C