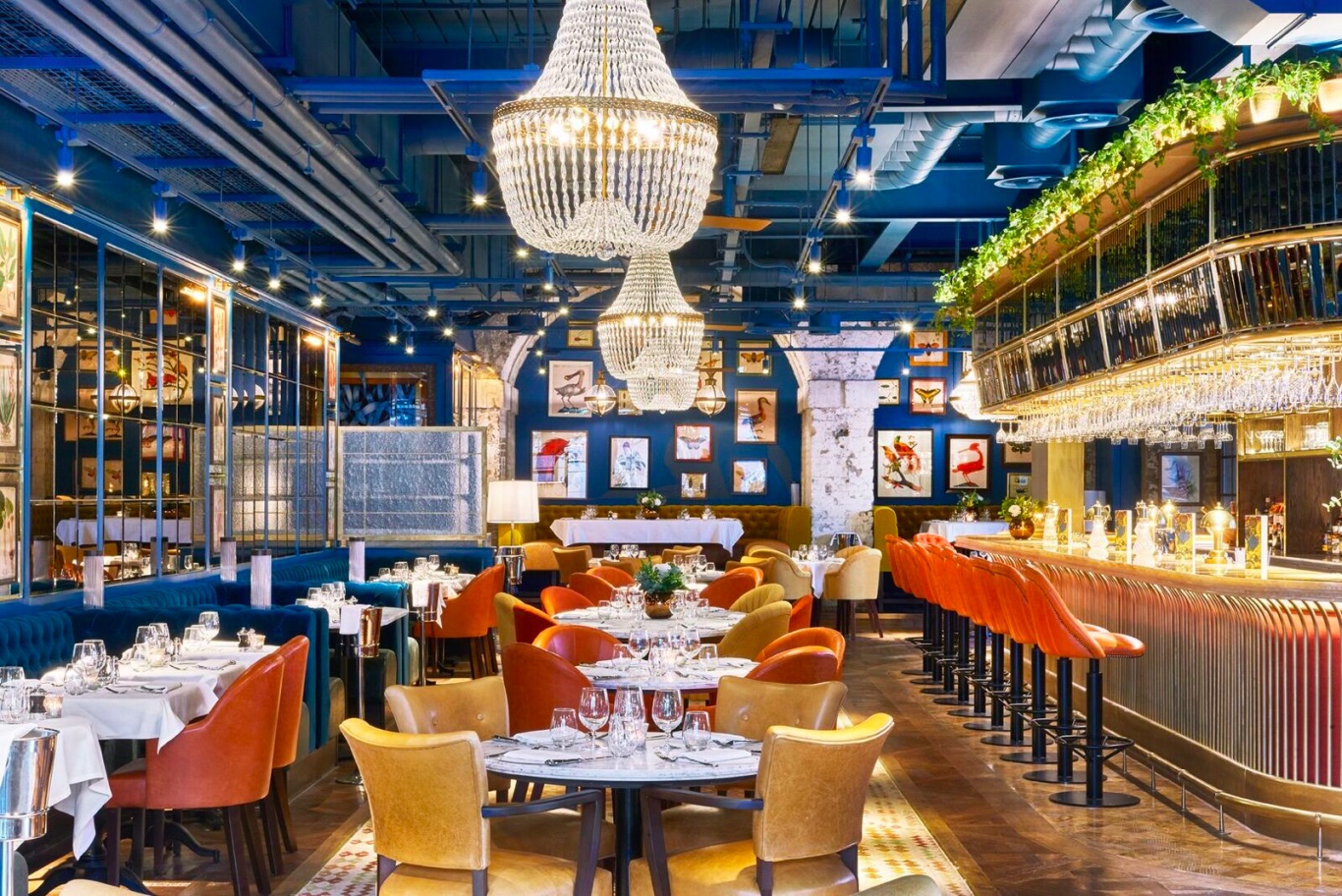 The Ivy has a long history in the capital. So how does its new King’s Cross branch shape up?

Iwas lucky enough to get a foot in the door of once-prized Covent Garden institution The Ivy at a reasonably young age – the days before social media and mobile phones at the table, of course.

Back then in the early noughties, the restaurant was famously booked up months in advance: befriending the manager was the only way to ensnare a table with relative ease.

So, after this first visit – something of a watershed moment (in my naive young mind, at least) – I made it my mission to do just that. As I left, I booked a dinner on a random day there and then, without knowing even who to bring, or whether there were sufficient funds in the bank.

And that was the start of it. On many an evening, seated at the ‘outer’ or ‘inner’ ring, we would self-consciously appear indifferent to the stars of the day – Hugh Grant, Noel Gallagher, a Spice Girl or two – dining in clusters across the room.

The historic hangout became fashionable in the 1990s following a revamp by Jeremy King and Chris Corbin, who owned Le Caprice. Prior to that, it had suffered its own time in the doldrums in the 1970s, even leading to it closing completely in 1989.

But its story, of course, stretches way further back: starting life as an unlicensed cafe in 1917 (thus celebrating its centenary last year), its first wave of success came crashing in the 1930s due to its location near the big theatres, and a quickly-acquired rep for exclusivity (not to mention a later closing time than others). Through its doors in those days? Why, only Laurence Olivier, Marlene Dietrich and Noël Coward.

Back to the present. By the late noughties my appetite had waned for its pleasures – a fact which coincided with the current wave of cutting-edge eating, arguably spearheaded by the likes of Barrafina, Polpo and hip streetfood purveyors such as Meatliquor (all of which are now small chains).

A decade on, the independent food scene in London is brilliant, chaotic, multi-layered and faster-changing than anyone could ever have imagined in the days when the West Street institution grandly stole the show, along with its cohorts J Sheekey and later the Wolseley. There are now top-level neighbourhood haunts in areas that once barely had an Overground station, while Soho has become the unofficial food capital of London, especially for small, walk-in joints with tightly composed menus.

So how does the Ivy fit in today? By doing what it’s always done, silly. In the build-up to its centenary, it started rolling out its format as the ‘Ivy Collection’: the first was WC2’s Ivy Market Grill in 2014, and branches in Marylebone, Soho and beyond followed. While real celebs may be thin on the ground these days, there’s still the dim lighting, velvet curtains and sexy counters. Oh, and lest we forget, comfort food by the bucketload.

In King’s Cross, the location means it’s garlanded with a unique moniker, Granary Square Brasserie, occupying the corner site that was home to the well-received (but slightly ahead-of-its-time) Grain Store restaurant. Its transformation into an Ivy is total: there are cut-glass pendants, banquettes upholstered in silk and velvet, exotic kilim rugs, and textured wooden tables. Is it glamorous? In a word, yep.

On a chilly evening we take a seat in the far western side of the long dining room, past the counter and near the floor-to-ceiling windows that will soon look out over the new Coal Drops Yard retail development. The menu boasts the same crowd-pleasers as always: starters of soup, prawn cocktail and smoked salmon, with mains like steak, roast chicken and fishcakes (although the famous shepherd’s pie is nowhere to be seen).

The restaurant has only been open for a couple of weeks – and to be honest, it shows a bit. Staff are enthusiastic but rather humourless, as if they’re concentrating hard on being slick and professional (underlined by the old-fashioned outfits).

Still, we order cocktails, which are fine, although my Campari spritz arrives with inferior Aperol. A port-rum julep is strong and slightly too sweet, while better is a GSB Manhattan, heavy on the barrel flavours courtesy of ruby port, with the underlying punch of Woodford Reserve bourbon.

We enjoy the food, but some dishes under-deliver. Starters are promising: beef tartare – a signature dish – is exactly how it should be, all quivering yolk on a round patty of hand-chopped strip loin studded with shallot, cornichons and tabasco. Only point? It needs seasoning.

Meanwhile, crispy duck salad is an explosive little stack: slivers of ginger and almost crunchy shards of meat provide bold flavours, while curly cashew nuts and rosy nubs of watermelon bring things down to earth. Arguably best of the three, however, is a raw market salad, its florets of root veg nestled with slender slices of beetroot and cauliflower on a smooth bed of avocado hummus, drizzled in manuka honey.

And while mouth-wateringly charred, line-caught swordfish (‘from the grill’) is wafer-thin and a tad overcooked, the flesh drier than the hoped-for melt-in-the-mouth. It too is redeemed, partially, by tasty toasted fregola with red pepper, chimichurri and basil.

Best of all? Roasted salmon: opaque and moist, the crisp skin adds a textural note, as does silky spinach wrapped around smoked almonds.

Let’s not forget: this is mass catering – up to 250 covers, across dining room, bar and terrace – so perhaps inevitably there’ll be glitches. Prices are good for the area, with starters around £7 and mains hovering at the £15 mark: something akin to affordable luxury.

All in all, an evening here is an unchallenging way to catch up with friends, without the food taking over.

Which is, of course, what The Ivy’s been doing so well for at least a century.