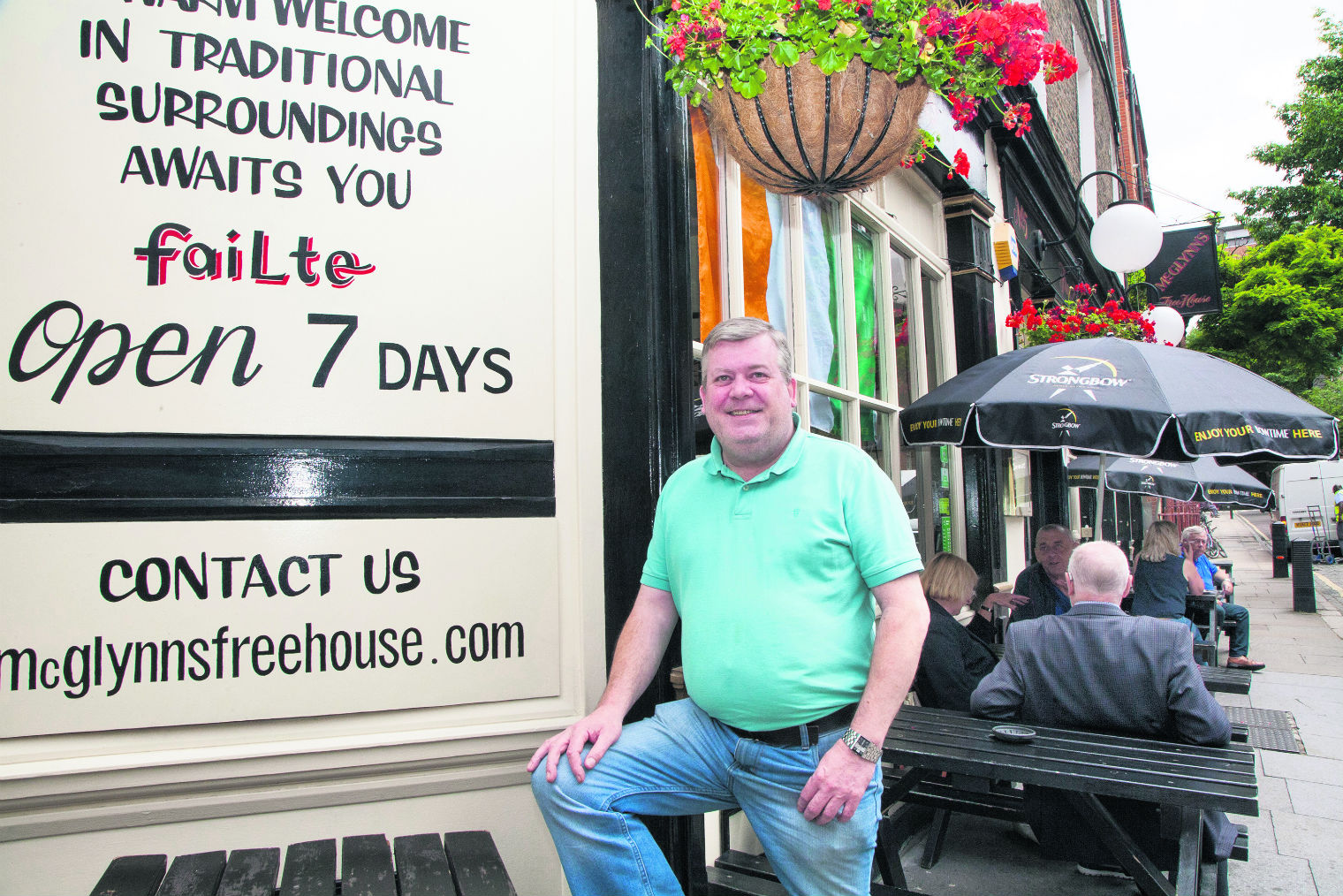 Meet Gerry McGlynn, who's been at the helm of his pub off the Euston Road for 25 years

For the past century, London has been a honeypot for Irish immigration. Times have changed and this is decreasingly the case, leaving only small pockets of a once thriving community. One of whom is Gerry McGlynn, the County Cavan-born owner of his self-titled traditional Irish pub, tucked away in a tranquil side street, minutes from King’s Cross Station. With its cosy interior, McGlynn’s is a welcome reminder of a people that were once so prominent in this city. Below he spills the beans on what it’s like being at the helm of a boozer for a quarter of a century – in his own words.

In this area there’s a pub on almost every street.
It sounds like a lot of competition, but each pub is so longstanding and well established that the owners stick together. Despite what you might assume – particularly considering the city and the times we live in – we do not see each other as rivals. We have a good rapport going on. If someone has to borrow a bottle of vodka on a Friday night, or needs me to get them something from the cash and carry, then it’s no problem at all. We all understand, and it’s good to know that you are part of a community of pub owners.

For obvious reasons, there is a very broad client base in King’s Cross.
With tourists and locals, builders and businessmen all searching for quality, it is important to keep standards high. There is plenty of business to go around and, as long as you maintain the quality in your food and drink, there will always be a strong client base, regardless of how the area develops.

Granted, I’m a little bit computer illiterate.
I’m the guy you pass by intently trying to type out an email with one fi nger so I’m probably not the most active social media mogul. People stumble across this place rather than fi nd us online, and they’re happy when they do.

I have worked here for 25 years and London is certainly my home.
It is comfortable and I know everyone in the area – well I may not know them but they certainly seem to know me. Cavan, where I’m from in Ireland, is famous for its lakes. It has 365 of them – one for each day of the year. I go back regularly and am always surprised by how many English fi shermen it attracts – you pop into a pub and you’d think you were in the middle of Yorkshire. I’ve contemplated going back to Ireland a few times but I’m a bit of a city slicker now and I’d get bored.

The Irish contingent in London has long gone – they’ve either died or moved back.
There used to be lots of work available in the UK and that was what attracted us but now there seems to be just as few prospects as at home. The building trade in particular was a big pull factor for young Irish but it is now a closed shop. It used to be so much easier but now they’d measure your head for a hard hat if they could.

For me, the British Library is probably the most valuable and significant building in King’s Cross.
We get swarms of visitors heading there or returning from a visit. I didn’t realise how large the place is: it’s nine floors above ground and five below – that’s a lot of books. It took years to build (work started in 1982 and it wasn’t completed until 1998), so we had a constant stream of business from the lads from the building site in. Here’s a little known piece of information for you: there are a load of JCBs buried underneath the British Library. It would have been far too much time, money and effort to crane them all out so they just dug a little deeper and cemented them over.

When I first came to London, I used to work 12 hours a day, 7 days a week.
I had to put in the hours but the hard work has paid off and was definitely worth it. Now that I am the boss I have more time to enjoy the pub. I am more than happy to excuse myself on a sunny afternoon and relax, pint in hand, on the front patio. This is also thanks to my landlords Con and Noreen. Despite how times have financially changed in London, they have never increased my rent. I am very grateful for this.

I enacted the smoking ban two years before the rest of the country. Ireland introduced the smoking ban before the UK, and having seen how well it worked, I decided to do the same. It was actually welcomed by both non-smokers and smokers alike. Everyone seemed to agree that if people are eating, others shouldn’t be smoking. I’ve still got the “non-smoking restaurant” sign out front – it’s no longer necessary but I keep it there as a reminder of the time I set the trend.