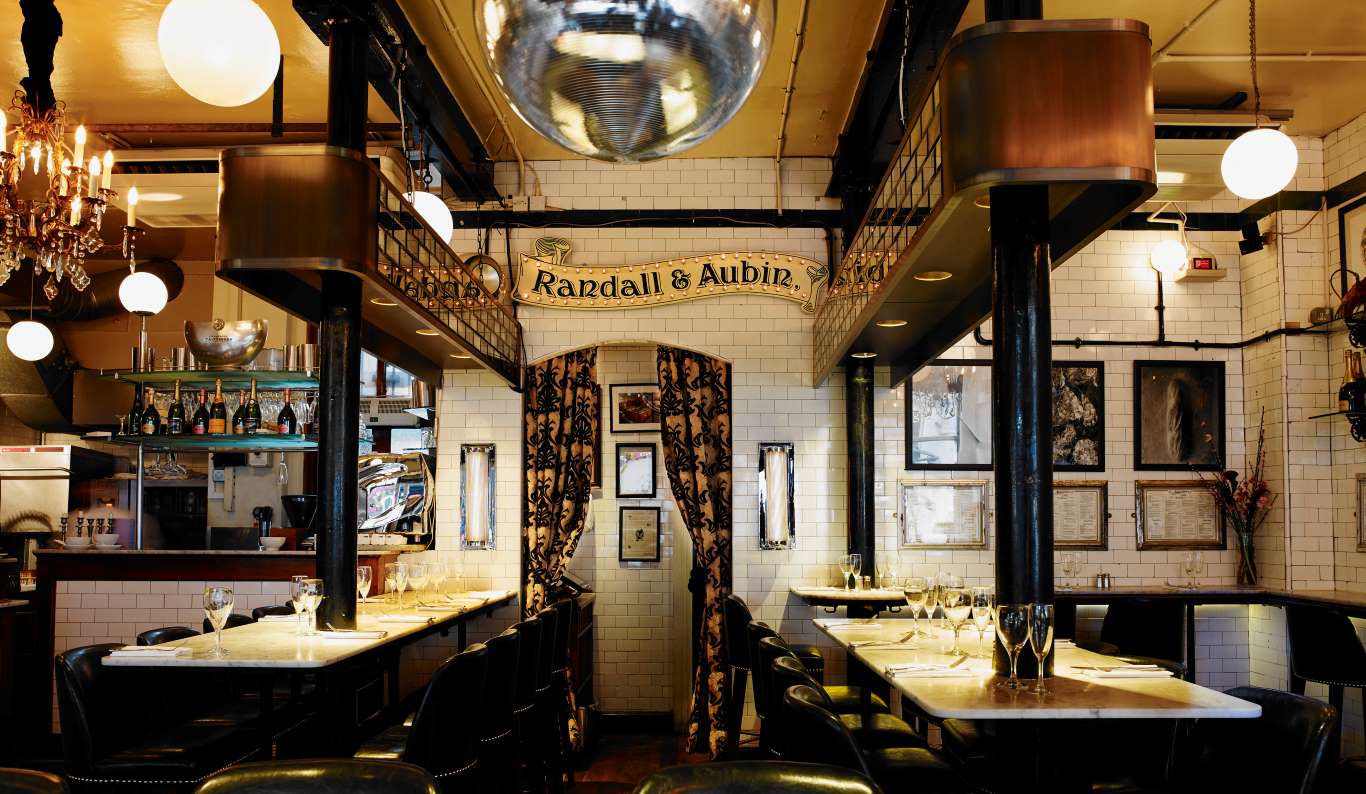 This West End classic still rules its lofty roost on Brewer Street. And it's busier than ever

Age: There aren’t that many W1 establishments still synonymous with the age of Soho just passed, but Randall & Aubin, going strong since 1996, is surely one such example. Back in the early noughties, when I was a bright-eyed twentysomething, it competed for my gang’s affection with Quo Vadis, The Ivy, then-new opening The Wolseley and nearby Zilli Fish. But it was always a little different, the pounding dance music – a notch too loud – attracting a crowd more keen on being seen than eating. And its huge popularity with the LGBTQ community added to its bohemian, anything-goes feel.

Where exactly is it? Set on iconic Brewer Street, in the heart of old-school Soho. Think that’s long gone? Have a snifter first at the French House, another Soho institution that still hasn’t lost it.

So what goes on there? At Randall & Aubin, it’s Anglo and French cuisine, the brainchild of Jamie Poulton and Head Chef Ed Baines. Their a la carte menu hasn’t really changed ever since my first visit nearly 20 years ago – and why should it, with such a timeless mix of fish, meat and crustacean-based dishes?

What should I eat? Well, R & A virgins need to get stuck into the shellfish: at every high table a gaggle of rowdy diners will be sucking down a round of briny oysters – Irish, native and rock – or a fruits de mer assiette. And of course the lobster, whole brown crab and langoustines are all super popular, too.

What else? We often make a bee-line for the rosy-rare tuna carpaccio, its generous slices perfectly juxtaposed with raw vegetable salad, sesame and an umami-laden teriyaki dressing. It’s the kind of place where you can’t go wrong with a prawn cocktail, either – here the signature dish is bedecked with plump critters, creamy sauce, smooth avocado and the crunch of baby gem.

And mains? Skip the steaks and dive into the section marked Poissons, where there’s posh fish ‘n’ chips, bouillabaisse and seared Orkney scallops. A pricey grilled wild sea bass steak, its flesh meltingly opaque, just needed its skin a tad crisper, but solid fingers of pea and lemon arancini and a distinctive truffle sauce compensated. Meanwhile Scottish halibut with potato terrine was a touch retro in appearance, but gilded by tasty mussel fritters and a lick-the-plate-clean shrimp cream.

The interior: discuss. The décor is almost as palpable as the buzzy atmosphere itself with a gigantic glitter ball offering a nod to Soho’s multi-storied past, marble top tables, 18th century Parisian chandeliers, cosy nooks, and corner tables.

And what do I drink? You can work your way through the classic cocktail list, of course, but the wine menu is well-priced (for Soho), with bottles from £22.50. Our Alvarinho – dry, citrusy, floral, easygoing – matched all the plates admirably.

What’s the service like? Incredibly slick, although there was a wait on some of the orders as the place was so busy – even at 6pm on a Tuesday. But the feeling is that the staff here have seen it all – which makes it all the more appealing.

Do say: ‘A counter spot for two in the window overlooking the street, please.’

Gasholder ate as guests of Randall & Aubin. For more on our food reviews policy see here