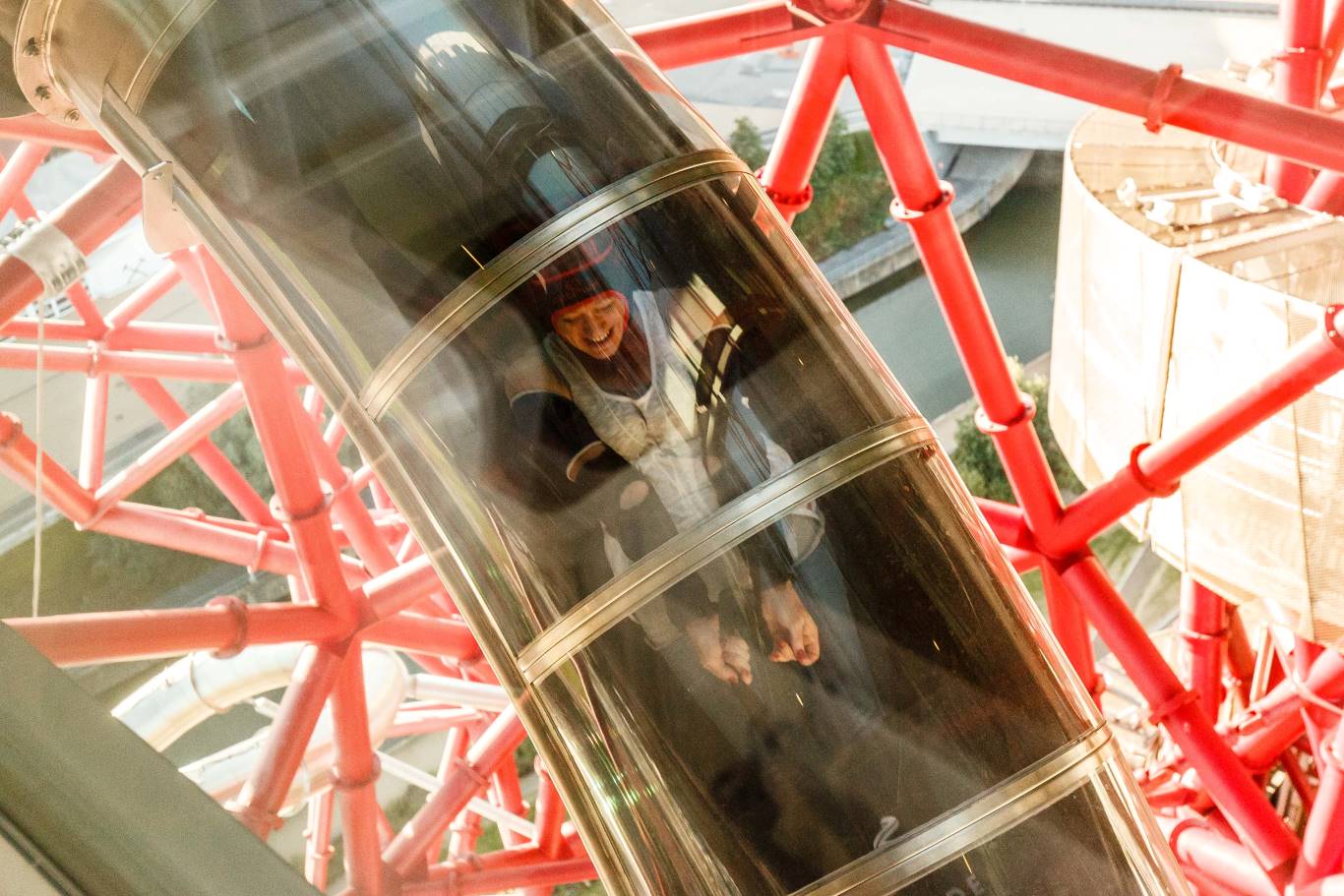 It's not for the faint-hearted: whizz around Anish Kapoor's famous Stratford sculpture at speeds of 15mph

The Olympic Park – if you’re not a regular visitor – rewards repeat visits. It’s certainly a favourite of ours to walk the ancient pooch.

Despite this, at the Westfield end opposite the space-age Aquatic Centre, we’d never got round to ascending the ArcelorMittal Orbit and riding its super-fast silver slide back down.

The other weekend, in a new year’s spirit of mild achievement, we decided to give it a whirl.

First things first: book. We did, and even then it was about a half-hour wait at the top, mostly due to the safety regulations and donning of kit. There are sturdy helmet-hats to wear, as well as elbow pads – and don’t even think about taking your phone up there, or in fact anything key or coin-related in your pockets. These must all be stashed in the locker, along with hats, coats and other accessories. Lots of punters were sent grumbling back down to ground level to dispose of these before being allowed on.

But hang on, what’s the story of the 114 metre-high Orbit, designed by Anish Kapoor, and the slide, created by German artist Carsten Höller?

The attraction opened post-Olympics in spring 2014, along with the rest of the park’s meadows, wetlands and waterways. Made from 600 pre-fabricated star-like nodes precision-built by a team in Lancashire, and assembled on site by four men and a crane, it was then adorned with lifts and interior viewing platforms.

Nerdier types might thrill in the knowledge that there are four uses for steel in the Orbit: the red super-structure, the spiral stairs, the Corten steel of the canopy and the highly polished steel mirrors in the upper viewing platform. Fun fact? It would take 954 steel drinks cans stacked on top of each other to reach the top of the sculpture.

But it’s not enough to simply take the lift to the top and snap a selfie or two with the panoramic views over the City, south, east and north London beyond. That’s still essential though: on a good day vistas stretch twenty miles.

Yep, you have to ride the tunnel slide down: after all it’s the world’s tallest and longest (178m). The hair-raising 40-second descent is comprised of both glaringly light and pitch-black sections which allow very brief mid-scream glimpses of Queen Elizabeth Olympic Park and the London skyline. Once plunged into darkness you’ll be left guessing which way you’ll drop next. Don’t crick your neck, mind.

With speeds of up to 15mph, twelve twists and turns, and a rather devilish little corkscrew at the end named ‘the bettfeder’ – bedspring in German – it’s so goddamn quick it almost feels like a dream (or perhaps a nightmare if you’re vertiginous).

The most daunting part, in our minds, was actually the anticipation: as you edge nearer the tip of the queue, you watch punters climb into a body bag, before being briefed by staff on how to release themselves down the tunnel drop.

But rest assured: once you’re in, and reach the point of no return, it’s over before you’ve even taken a breath.

You must be eight years old or over, at least 1.3m tall and weigh under 149kg to ride the slide. ArcelorMittal Orbit, Queen Elizabeth Olympic Park E20. Tickets are £12.50 entry or £17.50 to Ride The Slide. More info here