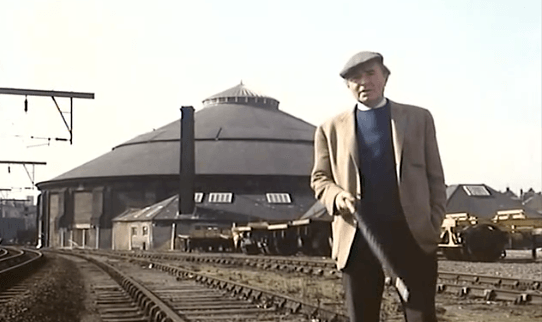 Video: The London Nobody Knows – see Camden in the 1960s

I believe a forgotten documentary is one of the greatest hymns to the capital ever made. And you can watch it right here, below.

Adapted from the out-of-print 1963 book of the same name, this peculiar work from 1967 takes a gratifyingly unsentimental look at the city. Documentaries tend to be about the past, or the here-and-now. Rarely do they cover a tipping point, that brief space in between the past and present.

The narrative of The London Nobody Knows does so with a curious elegance and respect. It sits in a nether space, finding corners of London where the near-past nestles against change and newness. It finds those spaces where Last Orders is being called.

Directed by Norman Cohen, the 45-minute film opens with tantalizing glimpses of new London emerging from the shattered remnants of World War Two and a dying industrial age. But before we can rest in the glass and chrome of London 2.0, we’re whisked to Camden Town and the former Bedford, a huge, decaying music hall. Here enters Hollywood screen legend James Mason, who guides us through the dying spaces. Walking around the derelict structure, he remembers the artists, songs and customers that once filled the space.

A lesser documentary would slide into sentimentality, bemoaning the passing of a bygone era, but Cohen uses Mason’s flat tone to deliver a narrative that is utterly neutral. And the film is the better for it. This attitude is beautifully summed up as Mason walks the derelict train lines emanating from Camden Town’s Roundhouse. Spying old pieces of railway equipment, he quips: “All these bits and pieces meant something once upon a time. They are what you might call the grumbling images of a past. But we’d be foolish to mourn them too readily.”

And this is the style of this unique, cult piece of cinema. Mason visits lamplighters, market traders and slum housing in (what is now unaffordable) Spitalfields. Cohen’s direction lingers on faces and places with a strong sense that what he is recording will soon be history.

Cohen’s film manages to peer at both the high-level changes of lost buildings, right down to the stories of forgotten Londoners themselves. Its editing style allows moments to breathe, contemplation to take in the complexity and contradictions of the city.

Despite its age the film has a legacy to this day. It inspired director Patrick Keillers’ seminal trilogy, London, Robinson in Space and Robinson in Ruins.

In turn these influenced cult north London pop band Saint Etienne’s London Today trilogy of shorts. Then, as if to complete the circle, that band’s film and album Finisterre was itself inspired by Geoffrey Fletcher’s original book, The London Nobody Knows. Indeed, band member Bob Stanley wrote in the Guardian: “When Saint Etienne came to making Finisterre, Fletcher was our mentor, The London Nobody Knows our first point of reference. Fletcher is the great forgotten London writer.”

One of the most amazing things about London is it is both old and new, unchanging and shapeshifting, rich and poor. It’s a patchwork of conflict and contraction. And despite its sometimes-bleak mood, The London Nobody Knows ultimately is a warts-and-all justification as to why we love our city so. As Saint Etienne said: “You could be invisible here. You can get a notion of floating across the city. I feel a nostalgia for an age yet to come.”

Follow photographer Dan Hall on Insta at @brixtondan. Watch it above or here or buy the DVD: bfi.org.uk

With the sad demise of our free monthly print titles across London last summer due to advertising revenues in freefall, we now need your support more than ever to deliver the ‘good-news’ cultural stories that celebrate our neighbourhoods. Every contribution, however big or small, is invaluable in helping the costs of running the websites and the time invested in the research and writing of the articles published. Please support Gasholder and our flagship Kentishtowner here for less than the price of a coffee – and it only takes a minute. Thank you.