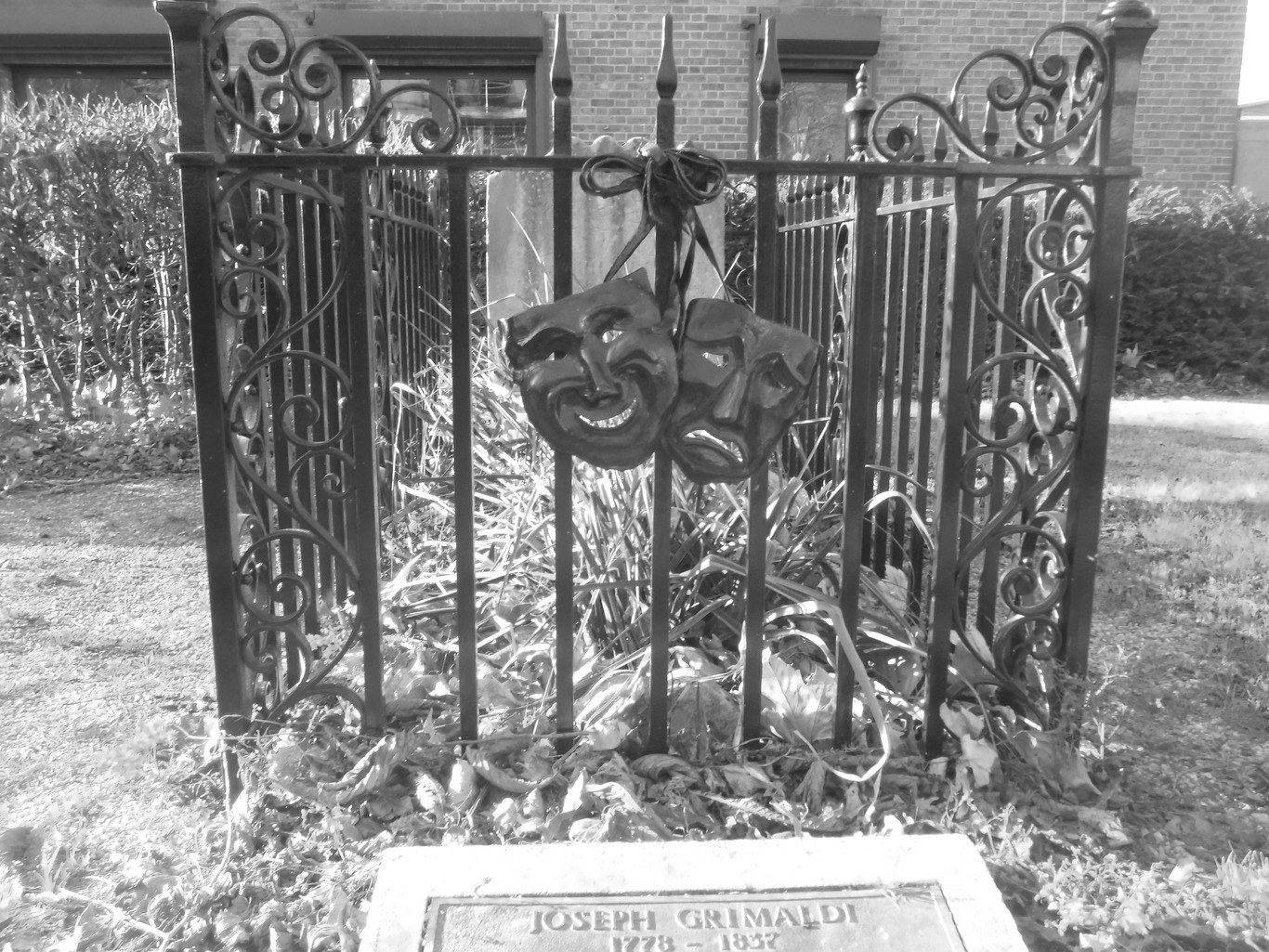 ‘Dancing on Joey’s grave’: the tale of the King’s Cross clown

The most renowned of all clowns lies buried just a short stroll from King’s Cross, and every year clowns gather there to honour his memory

Just off Pentonville Road, in a former churchyard, there’s a piece of public art which is more than a touch macabre. Two coffin-lid shaped metal installations lie side-by-side in the grass, and if you dance on them – or more like stamp on them – the different segments play gruff musical notes.

The churchyard is now called Joseph Grimaldi Park, and one of these coffin lids is a tribute to this most famous of all clowns, who lies buried somewhere nearby. (The other is to the composer and dramatist Charles Dibdin, sometimes described as Grimaldi’s mentor, who – strange this! – is interred some miles away in Camden Town).

If you have the knack, you’re supposed to be able to dance a musical rendition of the song Grimaldi made famous, ‘Hot Codlins’ (these were baked apples sold back in the day by street vendors). Though since I doubt there’s anyone around who knows how ‘Hot Codlins’ goes, I’d say – if you are tempted to tap dance on a coffin – anything goes!

“I wanted to create something that is constantly changing”, said the artist responsible, Henry Krokatsis – “a joyous interlude from the silence of death”. Thank you for that!

And Joey Grimaldi? In the early 1800s he developed the role of the clown as comic figure in pantomimes and on stage (not, at this time, in the circus ring) and achieved acclaim with performances at Sadler’s Wells, Covent Garden and Drury Lane. ‘Mother Goose’ was his breakthrough show – it ran at Covent Garden for 111 performances.

Grimaldi’s development of harlequinade, and his inventive use of face paint and costume, made him one of the celebrities of his era and a household name. There’s a blue plaque on Grimaldi’s former home in Clerkenwell’s Exmouth Market. To this day, clowns are often known as Joeys.

Ill health and rickety joints forced Grimaldi to retire from the stage in 1823. He was depressive and a heavy drinker and became mired in debt. In the 1830s he moved to Southampton Street (now Calshot Street) on the north side of Pentonville Road. Grimaldi popped in most evenings to his local, the Marquis of Cornwallis, and when he lost the use of his legs, the landlord carried him to and fro on his back.

On the evening of May 31st 1837, Grimaldi was carried home as usual. The next morning he was found dead in his room. He was buried nearby at St James’s, Pentonville. As well as the installation, there’s a more conventional gravestone, with railings around it decorated by the masques of comedy and tragedy – though that too doesn’t precisely mark the burial spot.

St James’s became known as the clowns’ church, and for many years hosted an annual clowns’ service. But at some time in the 1950s, the clerical incumbent cleared out the statuette of Grimaldi and photos of leading clowns complaining that they made the church porch look ‘like the entrance to a picture palace’. The clowns switched allegiance to a church in Dalston. And as if cursed by their absence, St James’s – a handsome chapel built in the 1780s – closed in 1978 and was demolished six years later.

Joey had the last laugh. On the exact same spot that the church once stood, Grimaldi Park House was built. The facade is a fairly convincing replica of the old church, with the addition of a likeness of the great clown high above the main entrance. Otherwise it’s a fairly pedestrian office building.

Most of the gravestones were cleared from the churchyard well over a century ago. It had a bad reputation. In the 1890s, it was alleged that as many as sixty or seventy sex workers used the burial ground for professional purposes, day and night. Some of this area is now a playground, and the rest a rather non-descript park which takes the name of its most famous interment.

And every year on 31st May, the anniversary of Grimaldi’s death, a handful of Joeys gather around his gravestone to celebrate the pioneer of their stagecraft. They blow a few whistles, do a couple of conjuring tricks, shuffle a few comic steps, raise a few smiles and round off the performance with the laying of a wreath. For a tribute to such an exuberant performer, it all feels a little melancholy – but then, clowns are.

This is an extract from Curious King’s Cross by Andrew Whitehead (published by Five Leaves, £9.95), available in all bookshops. Enjoy that? Read the story of Keystone Crescent here