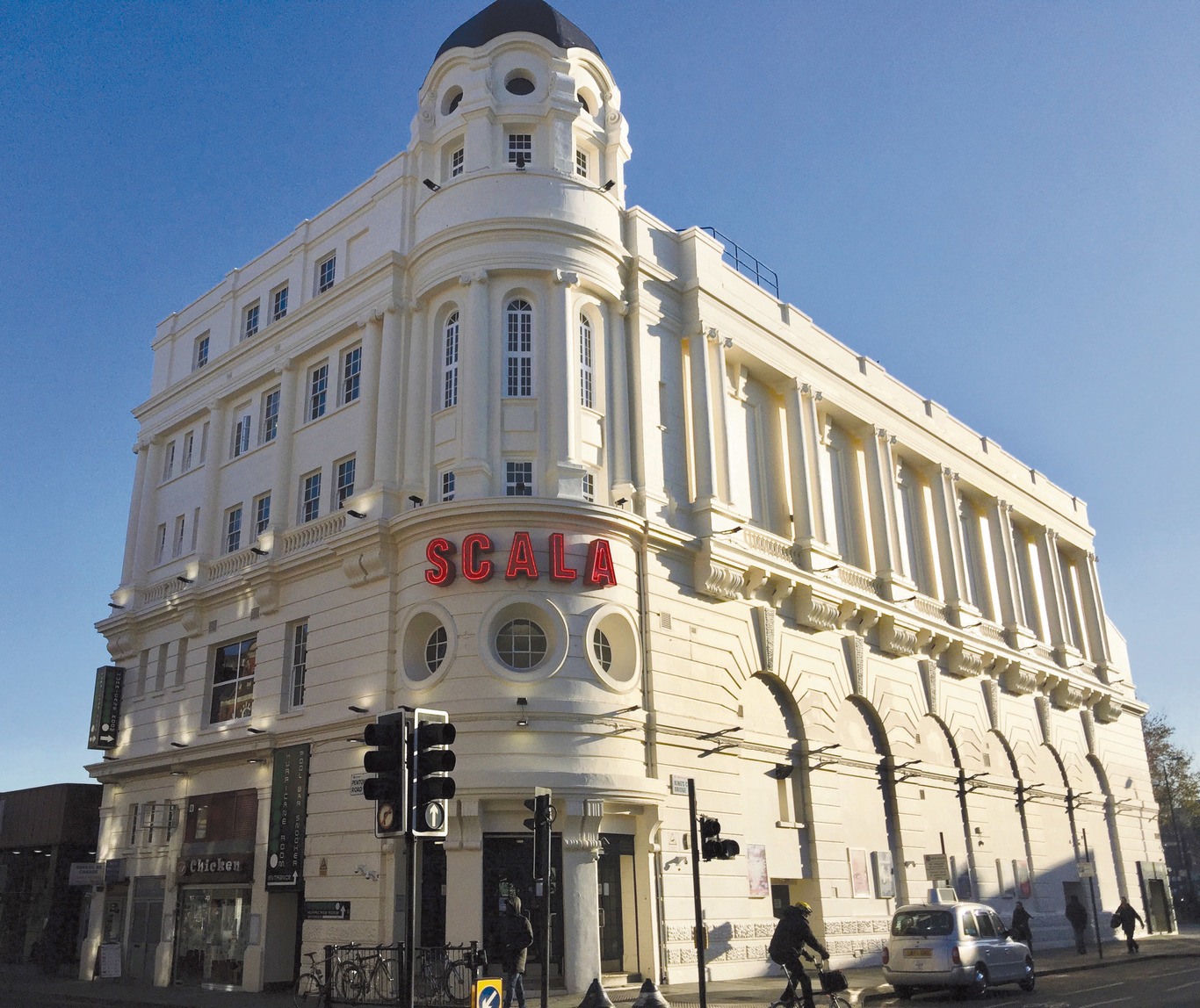 An all-night cinema? The fascinating history of the Scala

t was late August 1981. I was 17, tagging along with my punky boyfriend and his school mates on one of their regular expeditions to discover countercultural London. It was a hot summer evening and nearly dark when we stumbled out into the heaving Saturday night chaos of King’s Cross for the first time. Our final destination was just a stone’s throw from the station: an all-nighter at the Scala cinema.

I didn’t know it at the time, but this Edwardian-built picture palace had a fascinating history. The King’s Cross Cinema was at times a Gaumont and an Odeon, and for a while King Sound, a music venue where in July 1972 both Lou Reed and Iggy Pop played live. In 1980 the empty building reopened as the Primatarium, a short-lived ‘experience’ promoting ecology and environmental issues, before it came London’s legendary repertory cinema.

The Scala was all above ground with endless marble staircases, chandeliers and a jungle mural in the foyer. The café sold tins of beer and there was a cat roaming through the cavernous, smoky auditorium. We settled down for five films in a row on that huge screen and a bit of surreptitious snogging.

Dark Star. Assault on Precinct 13. Halloween. Living Dead at the Manchester Morgue. Psychic Killer. The intermission music was Joy Division’s Love Will Tear Us Apart. Rancid with Red Stripe, stale coffee and sleeplessness, as we left in the cold light of Sunday morning I looked back to see that the place was covered with a layer of grime. It reflected how we felt after our first All-Nighter – and I couldn’t wait to go back. I pinned the Scala’s fabulous monthly programmes to my wall for the next few years, unwittingly building up a knowledge of all types of film – horror, cult movies, gay films, comedies, Hollywood classics, arty world cinema, animation, experimental works. And then something incredible happened: I got the job of film programmer there.

It was 1988. I moved to London and into the nearest flat I could find to work, a pad above an estate agent’s office at the King’s Cross end of the Caledonian Road. It was opposite the mysterious Abcat cinema club, a place which I never saw anyone enter or exit. There was also Peter the barber who excelled at flat-top haircuts and the Gattopardo café which the filmmaker Dario Argento said made the best Italian coffee in London. Other neighbours included Housmans radical left-wing bookshop with its basement full of copies of the Peace diary. There was Mole Jazz, recently refitted to display 3,000 new LPs, 4,000 second-hand records, cassettes plus ‘over 500 titles on compact disc’. And The Bell, a mixed lesbian and gay pub on Pentonville Road. The Bell and the Scala clientele were one and the same.

I barely noticed the mad, bad and desperate elements of King’s Cross, only having eyes for my beloved Scala and the challenges of programming. By then the cinema’s jungle mural had been replaced by vibrant urban graffiti courtesy of street artists Yuval and Wigan, and there were now two resident tabby cats, Huston and Roy. It was all about films at this time, as Camden Council were no longer licensing the club nights which the Scala had hosted between 1984-87.

My job was to build the monthly programme of double and triple bills and All-Nighters, maintaining the repertoire of old favourites, introducing new titles and tracking down rarities. But one day an official letter arrived announcing notice of a compulsory purchase order: the building could be demolished at any time to make way for the new high speed rail link. We published this notice on the back of the July 1989 programme:

“CINEMA OR STATIONS? CULTURE OR CASH? High Speed trains are rapidly appraoching King’s Cross via Kent and South London – The second Channel Tunnel Terminal is due to be built under the streets of King’s Cross – British Rail are set to purchase and demolish 17 acres of residential and business property – 326 people will lose their homes – Nearly 2500 local jobs will go – 130 businesses will lose their premises – The Scala will be closed to gain access to the site and will probably be forced out of business – Let’s say no to B.R, – Write to your M.P. now – And watch this space for details of our ‘Day of Action’.

The Scala had a history of putting on benefit screenings and supporting all kinds of causes, from Youth CND to the Terrence Higgins Trust and the King’s Cross Disaster fund after the fire of 1987 – but now it was fighting for its own survival. To make matters worse, the cinema’s 12-year lease was due to expire in mid-1993.

The recession-driven hopelessness and drug-related violence were overwhelming as King’s Cross became increasingly dilapidated. We tried to raise the funds for redeveloping the Scala to meet the rent for a new lease, but with a compulsory purchase order hanging over the building it was impossible to secure investment, however passionately people felt.

The Scala closed in 1993, and with it went a repertory cinema that had inspired a generation of future filmmakers, including one of Hollywood’s biggest directors, Christopher Nolan, who still carries his last Scala membership card in his wallet.

After much wrangling with the council, the venue reopened as a music club in March 1999 – which it remains to this day – retaining the Scala’s name and up-keeping the now gleaming white exterior of the old picture palace to a wonderfully high standard.

The new high-speed train terminus finally arrived in King’s Cross in 2007, re-routed around the back of St Pancras. Today the area is very different from the place that I lived and worked in back in the late 1980s, but despite the glass and chrome I feel that it still has something of the grit and inherited magic of all that has happened here over the centuries since the revenge of Queen Boudica.