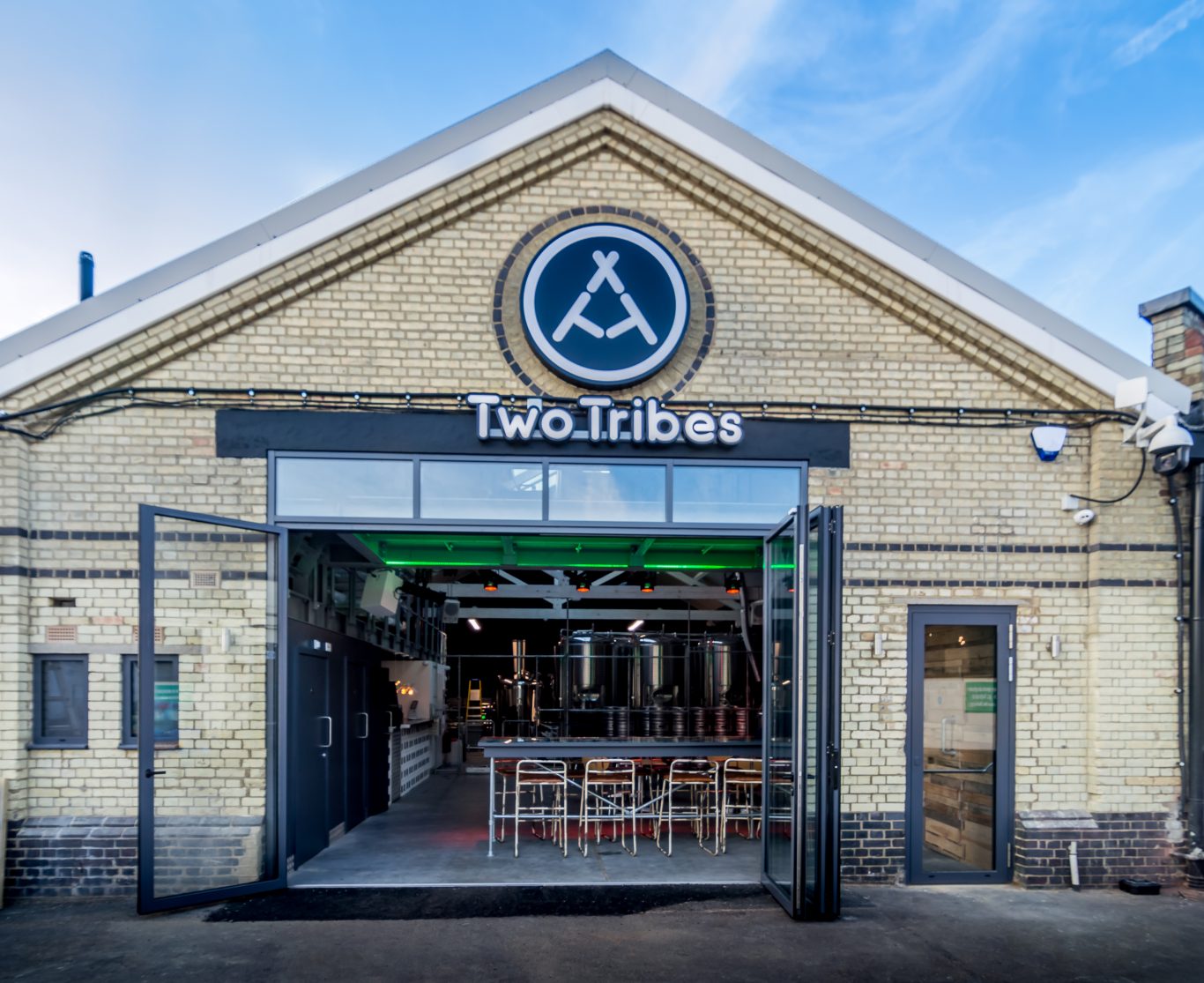 What’s the new Two Tribes brewery and taproom like?

“I kissed a lot of frogs,” laughs Justin Deighton, as he talks about his search to find the dream site for his latest endeavour, Two Tribes. A north London brewery and taproom adjacent to the famed Tileyard Studios off York Way, it’s part of a cosy artistic hub that’s home to seventy recording studios (yep, big league dudes like The Prodigy, Mark Ronson and Basement Jaxx).

And it feels like it was all meant to be: Deighton’s vision for the space – “a venue which would continue creativity after-hours, rather than everyone just leaving at five o’clock” – aligns perfectly with that of Tileyard’s co-owner, Paul Kempe.

Let’s rewind to where it all began. It’s 2015, and Justin and wife Niki leave their longstanding careers in music and open a craft brewery in Sussex – not as big a leap as you may be thinking.

“I feel like it has lot of synergy with the music industry in the 90s,” says Justin. “Guys were making music in their bedrooms, going and pressing up 1,000 white labels, putting them in the boot of their car, driving round their city and selling them to independent record stores – it was a movement.”

He’s witnessed the same drive in the beer world. “People were homebrewers: they started off with 200 litres and then moved up the scale to become proper breweries.”

He puts this down to the “independent ethos and the ability to be agile – that’s what’s changed the scene.” Justin himself learnt the art from a traditional Master Brewer, and with a few advanced tasting courses under his belt, he went on to develop the styles he wanted to make.

Why Two Tribes? As a DJ, producer and founder of iconic Pacific Records London, he knew a lot of people in the field. “Almost from the get-go we were asked to get involved in the Island Records Session IPA,” he says, “and that captured what we wanted to do as far as our ethos: collaborating with other creative industries, other creative people and bringing them into the brewing process.”

And so the moniker Two Tribes – half brewing, half innovation. He insists the name didn’t come “from dancing round my kitchen to Frankie Goes to Hollywood, although people would like to think so.”

Yeah, yeah. Nowadays, with what he calls an “intuitive understanding of the craft beer market,” Justin’s using his skills to build the visionary direction of Two Tribes. The KX site, the “creative kitchen” as he likes to call it, will encapsulate this. Alongside a core range of three to four beers, pioneering brews will play a major role.

Where does music come into play? It’s very much a part of it,” he says, “there’ll be events two to three times a week – any genre, any style, as long as it suits the vibe of the place.” He goes on to talk about Island Records and their involvement: “They’re actually moving to King’s Cross in August and they’re very keen to be doing A&R parties, invite-only, new artist performances, that sort of thing.” He talks fondly of how “they’re very supportive of the whole taproom and what it’s about.”

But there will be plenty of parties for locals too; after all, that’s what this project is all about – being part of the community and King’s Cross. Tucked away off the main road, Justin quite likes the fact that there won’t be much footfall; it retains an element of secrecy (not exclusivity, he’s keen to emphasise).

“I had a very strong idea about what I wanted to do with the taproom, having the ability to sell beer out your front door, and become a bit of a local hero,” he says.

Quality is at the fore, whether it be the booze, food, equipment or staff – there’s an impressive and ever so shiny Hungarian-made brew kit (the steel’s from Sheffield, mind), a top-of-the-range Funktion-One sound system and bespoke packaging for the beer cans (they’re working with close friend and graphic designer Leo Zero on this).

Three you really must try

1. The American pale ale
This goes by the name of Material World, a bitter grapefruity number with notes of pine and mango.

2. The session IPA
Simply called Tileyard Studios, this one’s fruitier, with flavours of pineapple and guava.

3. The old-skool IPA
The wittily named Dad Dance sees traditional West Coast flavours dominate, with the likes of citrus peel and spice from the malt.

I arrive at the site curious. Justin hired Christoffer Tuominen (ex-Beavertown and Camden) as brewer. “I got a phone call – here I am,” says Chris, as we meet. Justin calls the two of them the “Dream Team,” while Chris states: “I wouldn’t change it for the world.”

We tour the 2,500 sq ft space. “The brew house is 1,000 litres,” Chris explains. “We’ve got four tanks, they’re all 2,400 litre, we’re going to be double brewing into them as soon as we’ve got our recipe development done. For the opening we’ll have an American Pale Ale, a Session IPA and an IPA ready to go.”

The striking steel vessels occupy the back third of the room, giving way to a Scandi-style bar area at the front, complete with a stage to the right and mezzanine DJ booth. As we wander round, Dire Straits’ Sultans of Swing plays in the background: you can picture the area full of people, lights shining off the gleaming apparatus.

Not a beer lover? They’ve got you covered, too: wine and prosecco, plus negronis and spritzes – all on tap. Food wise, it’s local all the way, with Tileyard’s Vinyl Café serving up pizza from a converted horsebox (sounds pretty cool doesn’t it?), and burgers from awesome London meat aficionados Patty and Bun.

Justin’s passion and excitement for the enterprise shines through; he’s keen to “really work the spot.” One tribe we reckon he can count on? Gasholder readers. Hell, yeah.

Three more places to check out nearby

Coba
At this stylish contemporary Vietnamese Barbecue restaurant and cocktail bar, the menu is split into BBQ meats cooked on a charcoal grill, and soup noodles, made with a 24-hour broth. To start, expect prawn toast so chunky it far outweighs its dreary takeaway-resonant name, while better still is fried butter chicken, with a very dippable spicy mayonnaise. For mains there are lamb cutlets, sticky and red-rare, while both the vegetarian pho and duck ramen heave with a heady mix of carrot, cucumber, spring onion, red cabbage and some fiery peppers. And if you’re meeting friends who don’t know the area, or prone to moaning about off-the-beaten-track locations, watch their faces light up. Open daily for lunch and dinner (exc Sun), more info here. 244 York Way N7

Vinyl Cafe
Grab a coffee or decent light lunch at Vinyl and soak up the vibes of adjacent studios, home to chart-topping heroes like Sigala and Chase & Status, not to mention tech start-ups, fashion labels (including Liam Gallagher’s Pretty Green), and even brands like Notes coffee, which has its roastery based right here too. Tileyard Rd, N7

Newmarket Ale House
Tuck into pastas or risottos at this baby blue-painted boozer and Brewdog outlet, the nearest to Two Tribes, should you need an alternate meeting point on the main road. Sure, it’s not a must-visit – five minutes’ walk north is the iconic Lord Stanley pub, well worth the extra trek – but it’s nonetheless worth a pint. It’s also a hotel, so, in theory, you can party at Two Tribes and The Egg – and crash here after. More info, 17 York Way N7. Stephen Emms