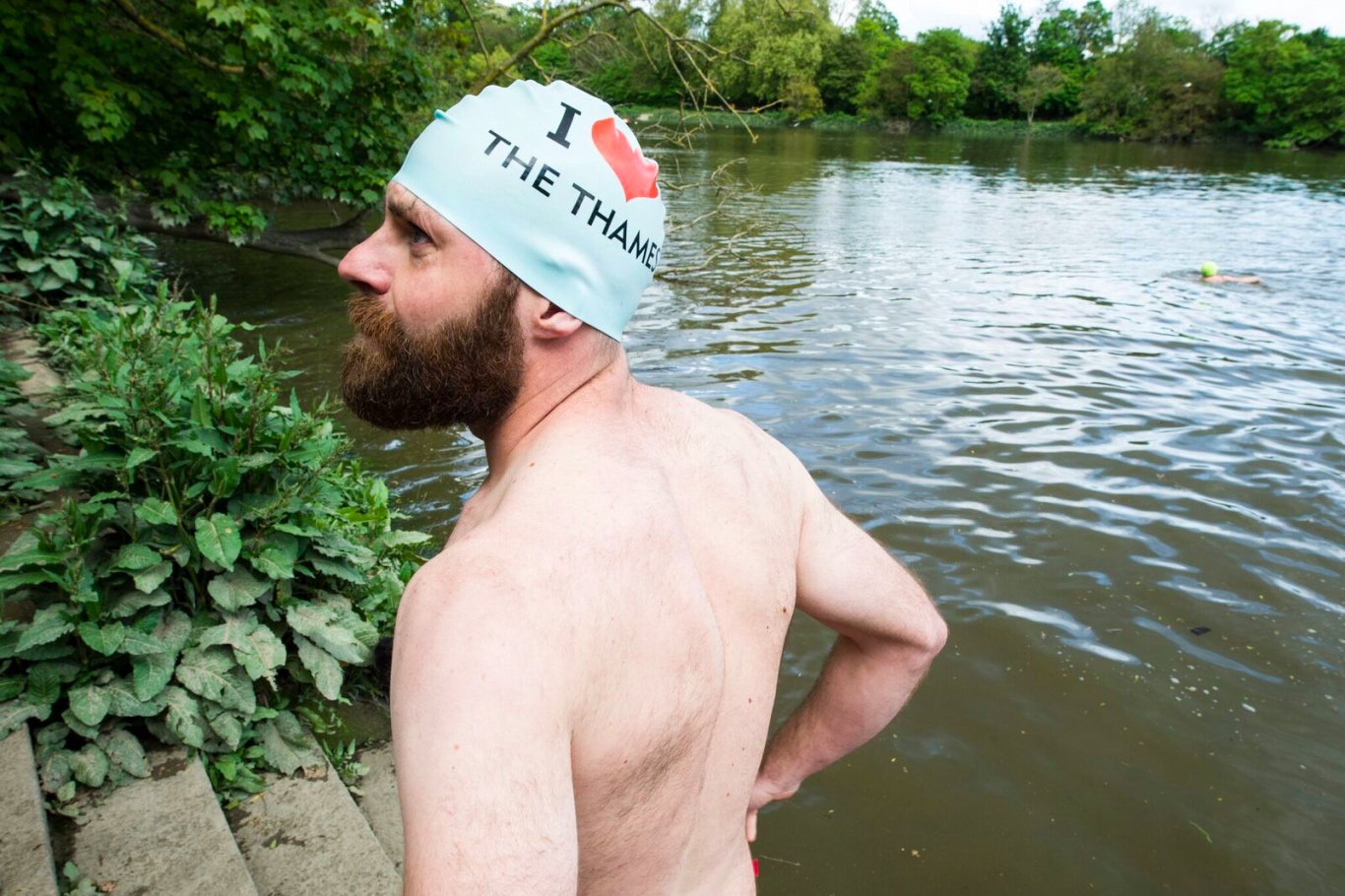 Forty-eight year-old father of two Theo Thomas wants to make the Thames fit to swim, and in doing so improve the mental and physical health of Londoners.

To achieve this he created the independent charity London Waterkeeper to hold a legal flame to the feet of Thames Water and persuade them to provide real-time information about water quality from the Cotswolds to the capital.

With the recent dressing down of the water companies by the Secretary of State for Environment Michael Gove for their poor environmental record, tax avoidance and failure to invest in infrastructure, perhaps the tide is turning for Theo’s project.

We caught up with Theo and swimmers from the Kenwood Ladies Pond as they took to the water in Richmond to raise awareness of the London Waterkeeper’s campaign, A Thames Fit to Swim.

What was your motivation for setting up London Waterkeeper?
As a child growing up in a very rural part of the UK, the rivers were not polluted so you wouldn’t think twice about taking a splash. For 12 years I worked for Thames21 and in east London, along the River Lea, it was clear pollution was a big problem. There needed to be a voice that challenged the environmental damage to our rivers and advocated solutions.

Why did you make “A Thames Fit to Swim” your mission?
With a swimmable river we’d make sure the city is as liveable as it can be. Tens of thousands of people would see their mental and physical health improve. Although sometimes it meets international bathing water quality standards, we don’t know when, so river users risk coming into contact with sewage.

How have you been trying to tackle the problem of a polluted Thames?
Last autumn we launched a petition asking Thames Water to tell us when its sewers overflow, in real-time. More than 900 people have signed it. Within three months they said they would put real-time sewer overflow data online and pilot a water quality warning system. Without rich data you get poor policy. We are using the Environmental Information Regulations to hold the authorities to account in a way that hasn’t been done before.

How are they responsible for polluting the water?
Rivers are treated as part of the drainage system, which is a bit Victorian. It’s legal for Thames Water to allow sewers to spill into rivers when it rains and these discharges are consented by the Environment Agency. We need a better system so overflows only happen when we have extreme rainfall, not virtually every time it rains. That’s why real-time monitoring is a key part of ‘A Thames Fit To Swim’; it will make that information public in a meaningful way.

What has to be done to create designated bathing area on the Thames as they have in other European countries?
It will take a lot of work. The dream is to have urban beaches, and changing rooms and showers would be nice too. And we need Thames Water to meet its obligations under the Environmental Information Regulations 2004, which say it has to tell people when its sewers overflow. If we know when the sewers are spilling people can avoid swimming in the pollution.

There could be an app that allows people to book in for a swim in the period before the high tide turns, when the Thames comes to a stop as the river and tide cancel each other out. With real-time water quality monitoring you’d get a message telling you if it was clean enough. There could even be Swim Zones that link together for longer adventures.

What can we learn from the example of Copenhagen, who have had swimmable harbours for over 15 years?
They had the advantage that all of the authorities wanted to make the harbours swimmable. In the UK responsibilities are fragmented so that is a challenge. The big lesson is that the urban beaches and harbour swimming pools are now the most popular open spaces in the Danish capital in the summer. It has transformed city life.

What benefits would a swimmable Thames bring to the city?
Parks are great but they are quite formal settings. When you are in the river it is exhilarating and unexpected. You are hyper-aware of your surroundings. Being able to tell your friends you swam in the Thames is pretty cool.

What can Londoners do to help?
Support London Waterkeeper’s ‘A Thames Fit To Swim’ campaign (see below).

Do you see the Thames becoming a safe recreation river in the future?
It took Copenhagen ten years and we are just starting here. There are no rivers with designated bathing water status in the UK. There’s a culture to change and technology to develop but it’s within our grasp.