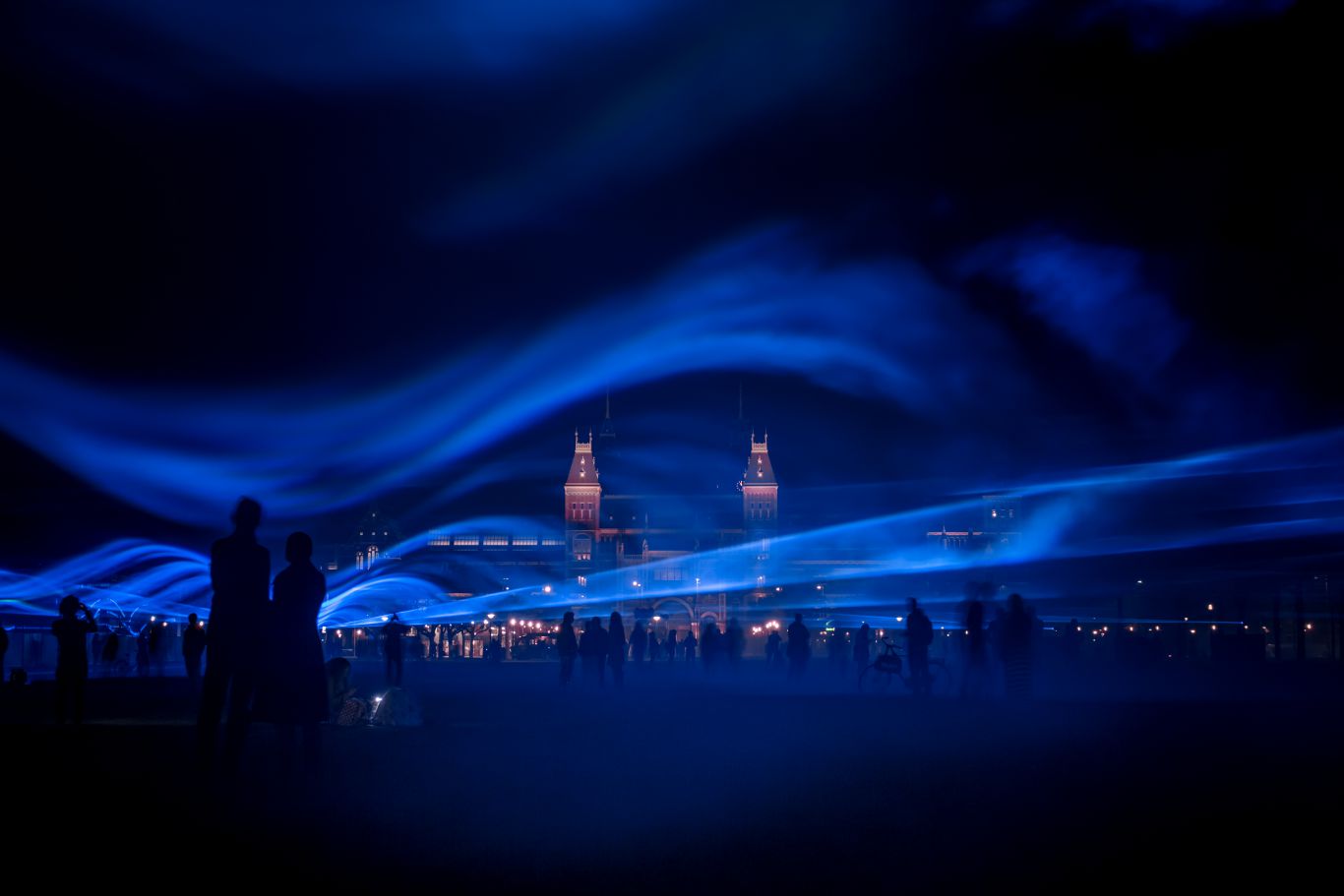 Back in the darkest, coldest days of January 2016, we wrapped up warm and headed down to Granary Square.

Why? Well, King’s Cross was a key focus of an inaugural urban light spectacular conceived to rival festivals such as Berlin’s Festival of Lights, Fête de Lumières in Lyon and Vivid Sydney.

The free bonanza saw twenty pioneering international artists commissioned to transform our buildings and streets with vast light installations. And it proved a pretty good reason to leave the house on an icy evening.

We huddled close together with thousands of other curious Londoners in the heart of N1C to gawp at the Circus of Light, a vast animation across the breadth of the repurposed Granary Building (see below pic) specially commissioned from Portuguese studio Ocubo. Just as impressive was the nearby Diver by Ron Haselden, a 17-metre light sculpture at the (now sadly closed) King’s Cross Pond Club.

The event – whose first UK outing was in Durham – was the brainchild of arts charity Artichoke, an ambitious creative company which works with artists to invade public spaces with large scale events (they’re the ones that brought people out in droves onto the streets of London to see the Sultan’s Elephant a decade or so ago).

Happily Lumiere was a huge hit: over a million people flooded to glimpse it over the four nights, the nocturnal festival thrilling all – it seemed – in its intention to reveal the city quite literally in a new light.

This time around, you know it’s a big deal when Mayor of London Sadiq Khan is as excited as he is right now. “Lumiere London 2018 will be even bigger, brighter and bolder,” he says, “with some show-stopping installations re-imagining London’s iconic architecture and streets.

“I’m also delighted that this year we’re organising community projects in outer boroughs to ensure that as many Londoners as possible can get involved with this world-class event. Festivals like this showcase our city at its international, creative and open best.”

Incredibly now the capital’s largest art event, it’s still free to attend. There’ll be more than 40 artworks made using the medium of light, ensconcing the city’s most iconic buildings, landscape and architecture. The festival features artists from across the UK, France, Germany, the Netherlands, Spain and Canada amongst others.

The good news is that this second edition of Lumiere also extends from north to south across the Thames through six key areas: King’s Cross, Fitzrovia, the West End, Westminster & Victoria, and the Southbank & Waterloo.

And, as the mayor says, Londoners will also have the opportunity to take part in the creation of a number of festival artworks – so no-one should feel excluded.

Five works to look out for

Waterlicht by Daan Roosegaarde (Netherlands, main pic)
Inspired by our changing relationship to water and the risk of global warming and rising sea levels, the Dutch artist will transform Granary Square into an ethereal dream-like landscape. Waterlicht underlines the power and poetry of water, enveloping viewers in a virtual flood whilst contemplating its potential for the future. Can we build floating cities? How much power can we generate from the movement of water? For a fully immersive experience the public is encouraged to use their mobile devices and headphones to tune into the accompanying soundtrack. Wowsers. Granary Square N1C

Voyage by Camille Gross & Leslie Epzstein (France)
Located in the West End, this work is inspired by our “physical journey through time and space”, from the Industrial Revolution, through the Belle Epoque, arriving at the present day. It’s characterised by the immediate and frantic speed of travel, all measured by the rhythmic movement of a giant illuminated clock and projected onto the facade of the Hotel Café Royal. Hotel Café Royal, Regent Street W1

The Umbrella Project by Cirque Bijou (UK, pictured)
A worthwhile series of community participation projects defines this year’s festie. This choreographed performance piece using LED umbrellas (see above) by Bristol-based Cirque Bijou works with community groups in Redbridge, Greenwich, Lambeth and Waltham Forest through a series of choreography and performance workshops to create glowingly beautiful artworks that will pop up in Piccadilly, Fitzrovia and King’s Cross.

Bottle Festoon (UK)
Across various locations, installations of chandeliers made from recycled plastic bottles, with the participation of community groups from the boroughs of Greenwich, Lambeth, Redbridge, and Waltham Forest, will be exhibited in locations in King’s Cross, Fitzrovia and Mayfair.

Aether by Architecture Social Club (UK) & Max Cooper (UK)
The British collective of designers, architects, technicians and poets present an audio-visual work, whose “glittering mass” grows, rolls and splinters in reaction to the soundscape created by music producer Max Cooper. Connecting light and sound to the emotions of viewers and playing on our intrinsic and emotional relationship with form, colour and sound, Aether accentuates connections with the physical, engulfing the viewer in a rich, sensory experience. Central St Martin’s, King’s Cross N1C