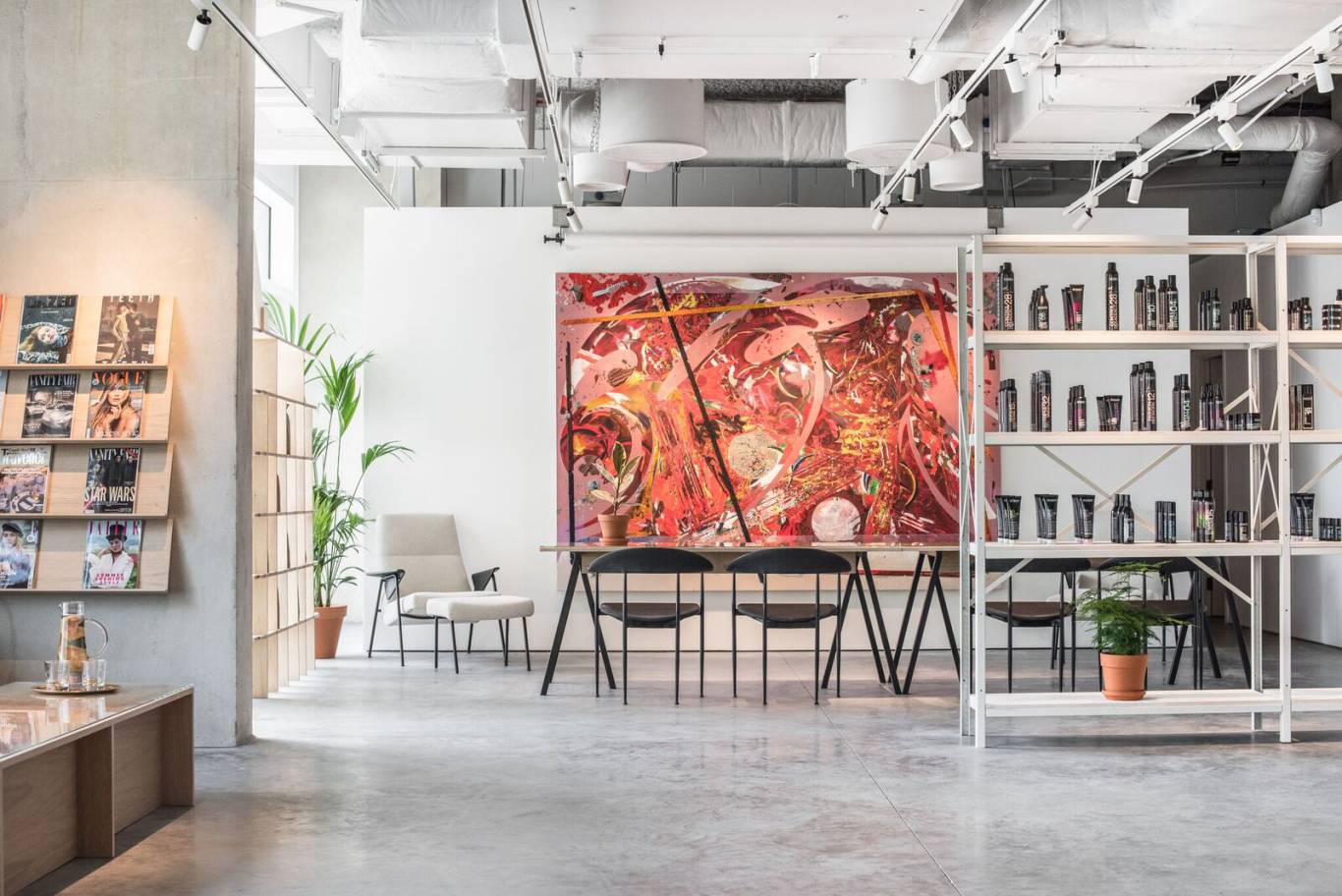 An immense new creative space has just opened in King’s Cross. The multi-functional set-up is a hive of artistic activity, including a hair and beauty salon that doubles up as a photographic studio, art gallery and stylist training area. Radio is, according to owner Corrado Tevere, “a platform for people to come together and collaborate in a wide range of artistic pursuits.”

N1C’s latest arrival is most certainly not new to the hair styling game. Corrado has been cutting locks since the mid 1990s. “It all started quite accidentally,” he says. “I came here from Italy because I wanted to study art. Central Saint Martin’s was an option but it was too expensive.” He was sitting in the salon of a friend of a friend when he noticed a hairdresser working very technically. “I looked at him and I knew that I wanted to do that.”

He soon became an assistant, worked his way up and opened the first Radio in 2010. They have since spread from Shoreditch to Mayfair. “I never set up the company to be a big chain,” says Corrado. “The reason why we opened another branch is because we needed a salon of this size to enable us to consolidate our artistic and educational pursuits in one substantial space.”

The sheer scale of the building enables the team to amalgamate everything they have tried to do in the last seven years, transforming it into one holistic unit. Upon entry into the cavernous space, the chatter of pristinely dressed, delicately tattooed stylists and artists merges with a gentle soundtrack to cut through the white-walled warehouse studio. The abstract paintings of Victor Payares currently occupy the walls, which welcomes artists from a variety of disciplines in monthly cycles. Changing the space is important for Corrado as, he says, Radio is trying to encourage people to admire, display and produce art.

The Redchurch Street venue was Radio’s flagship hair-salon-cum-art space. “It really was the art street of London, and the outlet used to be a gallery so it was really important to me that we kept it that way.” Although aware that “you get tonnes of salons who exhibit art”, Corrado maintains that “the way we run is different, we are constantly looking to completely change, by bringing in really large art works from both established and new artists.”

Corrado briskly whips open his laptop and begins to talk me through some of Radio’s previous exhibitions; his enthusiasm and engagement with the work beams through, despite the fact that he is saying little and letting the images speak for themselves. The works range from vast canvases depicting sunsets inspired by the 1980s Italian disco scene to black and white portraits of some of rock and roll’s greatest anarchists. Much of the work has been produced by friends of Corrado, acquaintances he has made over the last twenty years of buzzing around London’s arts circuit.

For any active member of London’s artistic community, it isn’t an easy decision to move away from the grassroots energy that created east London to head over to the top-down development that has created the cultural hub that is King’s Cross. “When I first came to the area a few years back, I was unsure. I had been based in Shoreditch since 1996 and it’s very difficult to go anywhere else after that.”

His ears began to prick to the creative emphasis being placed on the redevelopment of King’s Cross. “As I started to spend more time here, I’ve grown to really like it.” Central Saint Martin’s (UAL) was a big pull. “With 3500 art students and lecturers, the university is the heart of this area and one of the main reasons why I decided to move.” In fact, he’s already discussed collaborating with students.

Corrado, a man whose nostalgia is sometimes pricked by what Shoreditch used to be, has concluded that this kind of transformation is inevitable; this how it works in big, desirable cities like London.

“The city is always going to change, get younger; this is how it is. I’ve been here for two decades and it is always going to be revamped, there isn’t much you can do about that.” While there’s still a good balance in Shoreditch – says Corrado – Soho on the other hand is a different story. “I still get really sad about it. I remember when I first moved to London, it was the place to be but now they killed the area.”

King’s Cross is different. “I used to go to parties here, particularly in the Boat Club, but there was nothing other than an old clubland and empty space.” Corrado is very impressed by how the developers are going about their business, too. “They have been strong and selective about what they are bringing and it’s not easy to do that. They must have the likes of Pret a Manger and Costa knocking at their door all the time.”

On a practical level as well, the centrality of King’s Cross and connectivity to Europe made sense for Radio. “We have clients from all over the city, it felt right to move to such a thriving, central location.”

Time is ticking on, streams of photographers, clients and artists are darting in and hopping out of the meticulously designed studio. Corrado must get back to carefully curating his latest artistic space to life.

As I prepare to head off, I ask to what he owes Radio’s success. “Our total dedication to the art of hairdressing,” he says.