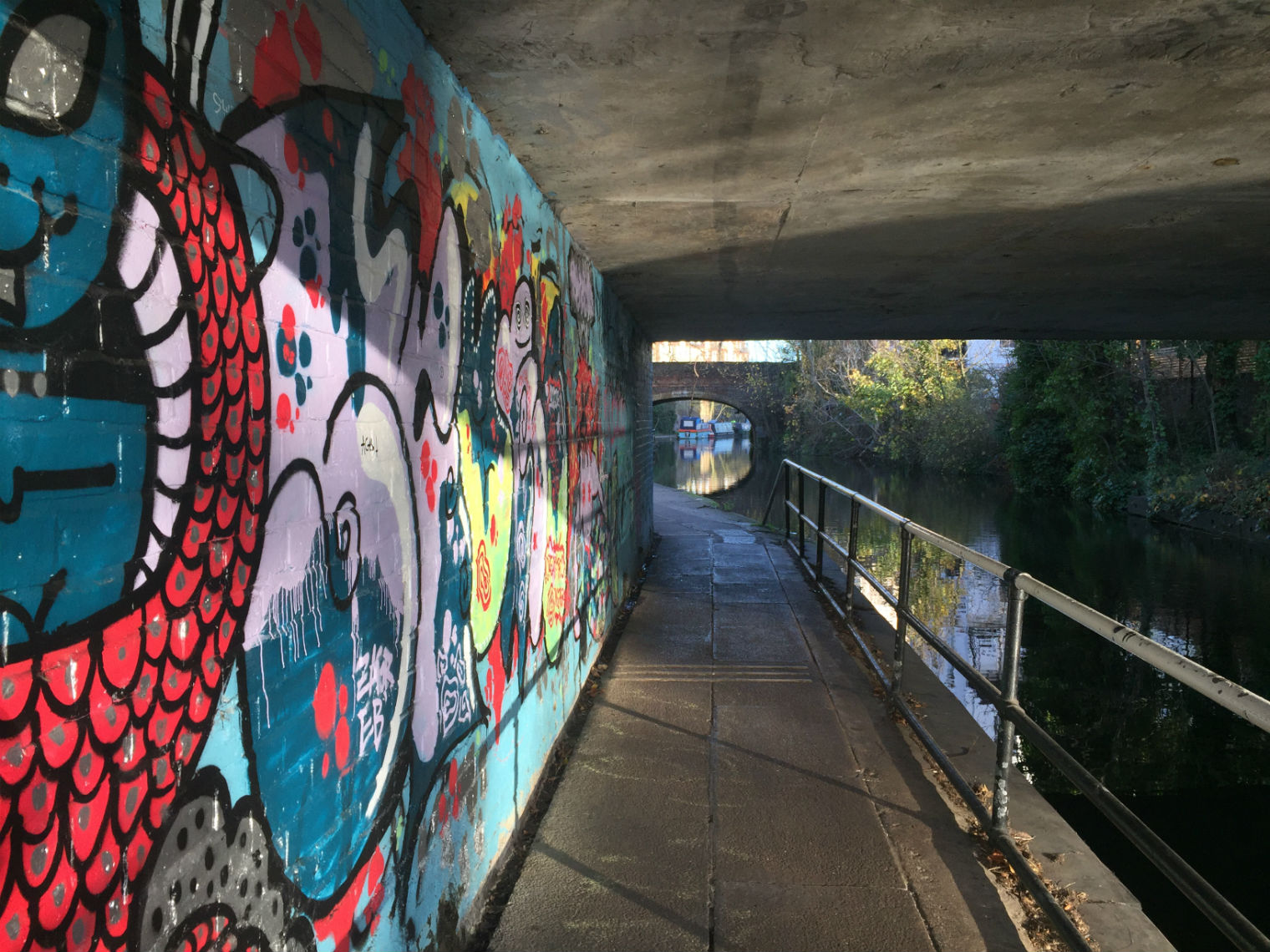 Cyclists, pedestrians and a towpath. What went wrong?

Iwalk along the canal daily to the office, ageing Jack Russell trotting by my side.

And, as we turn the corner descending from the street and catch the first eyeful of water, I take a deep, relaxing breath. There’s something about the view that’s so instantly calming.

That is, of course, until a bike comes flying out of the tunnel, bell ringing like there’s an international emergency, and my poor animal jumps out of the way, terrified. Cue more bell-ringing.

You could argue that yes, it’s a sound way to alert pedestrians – and I have no problem with that (in fact, I love cycling myself). But what does irk is the apparent self-importance of a minority of cyclists: excessive speed, relentless dinging, and need to reach their destination (without delay!) taking precedence over every other canal user’s. These few are less cyclists, more cyclopaths.

The epitome of this seems currently to be the various temporary pontoons erected alongside the towpath in King’s Cross, where endless construction work is being done to the Fish and Coal buildings. Here clear instructions demand cyclists dismount at each pontoon. But many don’t.

If you’re in a rush, isn’t it better all round to ride on the road? The canal is about meandering, contemplation, a retreat from the crazy-busy streets above.

So I support attempts to redress the balance by the Canal and River Trust. As part of their campaign to “preserve the peace on London’s towpaths”, amongst other schemes they have roadtested a string quartet by the water, while staff and volunteers chatted to visitors about slowing down.

It’s no surprise to learn that these ancient routes, built during the industrial revolution for horses to tow boats laden with goods, had a whopping 48 million visits in London alone last year.

“Towpaths are among our most precious green spaces,” says Dick Vincent, London’s towpath ranger for the Canal & River Trust, “antidotes to the pace and stress of the modern world and places to relax and unwind. They are ‘super slow ways’, providing a slice of peace and calm through the centres of our busiest cities.

“Today they are more popular than ever, with more investment in improvements and better signage, but with that success there are also problems. We know that there are issues with some inconsiderate cyclists who are choosing the towpath as a fast alternative to the roads.”

Vincent adds that “of course it’s great that so many people like cycling along our lovely canals and rivers, but it’s important to remember that there are a lot of pedestrians on the towpath, many of whom are children.” He suggests slowing down and remembering “we are all there to enjoy the space.”

If you need further proof, they’ve produced a code, Better Towpaths for Everyone, after consultation with thousands of visitors. The top three issues raised were the need for improvements to the towpaths, better signage and better behaviour between visitors.

There’s more good news: in 2015 the Trust secured over £8m of funding to improve its towpaths, and it’s planning a further £10m investment too. Which all sounds like a positive thing.

“If you’re in a rush,” concludes Vincent, “the towpath is not the best place for you, so please choose a different route.”

Ding ding if you agree.

Simply put, cyclists need to be mindful that they are sharing the road, towpath or park with other users. Using the towpath is a privilege and one that means many cyclists can avoid busy London roads. But as with the ongoing debates with road vehicles, cyclists need to learn to share and be mindful wherever they are.

Good etiquette guides, available and well signposted, suggest that cyclists should ring their bell twice to let other towpath users they are approaching. I think this is a fair piece of advice and one I use regularly. However, many towpath users are listening to music or are deep in conversation, so it is no surprise that people ring their bells louder and more frequently to get their attention.

The towpath is also a scary place to be for us: if a pedestrian steps out without looking behind them, it’s straight into the canal for ongoing cyclist.

Regarding speed, I agree, this isn’t a stage in the Tour of Britain. If cyclists want speed, take the road and if you want to race your mates, go to the track or Regent’s Park early in the morning.

If I Googlemap my commute, I get told to go via the canal. But I know that as a fast cyclist, it isn’t suitable for me. I go on the road and get there much quicker.

Cyclists have choices, and they need to make the right one that balances speed, traffic and other users. The faster you go, the faster you fall into the canal. I can’t recall the amount of near misses I’ve seen whilst sat drinking a beer along the water. Bumbling pedestrians can’t be blamed for all of it. Same as the advice with the road: if the gap is too narrow, don’t go for it.

An interesting side point is that my best friend was almost pushed in on purpose a few years ago by some youths. She managed to hold it together and stay on the towpath. However, as she cycled further along, she found a girl who was soaked and in shock, as she had been successfully pushed into the river by the same group.

It’s no surprise some cyclists just want to storm through the towpaths and avoid being targets for people like this. However, again if this is a known threat, cyclists can just go on the road.

Is there a solution? As more people take up cycling in London, we need to raise awareness of the etiquette on towpaths. Similarly, more needs to be done to make pedestrians aware of cyclists and the risks they face.

Finally, from a cyclist to a cyclist, we get enough abuse on the roads from motorists, black cab and bus drivers. Let’s not wind up pedestrians as well: remember, we have legs that can walk too – even if we prefer to cycle with them. Follow Anup Patel on Twitter @youngdonkey

I regularly cycle along the canals for leisure. It is fabulous that we have such a wonderful space to enjoy where you can escape the noise and bustle of the city within a few seconds off road. But some stretches are busy with other users, walkers, runners, and dogs not to mention other hazards like blind corners, bollards and, of course, the water. So my tips are as follows:

1. Slow down, chill out and go with the flow when it gets busy. You will only get to your destination a few seconds later.
2. Warn other users of your approach with advance ring of your bell or polite verbal warning “passing on your right/left”.
3. Use outside peak times or seasons. If you are lucky you may get the canal to yourself.
4. Remember (please) you are cycling ambassadors, so be nice and polite. Nick Freilich is the manager of Giant Camden, 75-77 Kentish Town Rd, NW1

When I started cycling, the canal seemed the perfect option for my commute: traffic free, quiet. I used them for a while to get from where I live to central London. At the beginning it was all right as long as I was using them on quiet times (very early in the mornings or late at night). The reasons I stopped using them are:

1. Safety concerns
As I can only freely use them at quiet times, it was a bit scary for a woman riding on her own. I’ve seen stories in the news about cyclists getting pushed into the water by gangs just wanting to have a laugh. Also during some of my canal commutes early in the mornings, I came across drunk people or those smoking drugs. If they wanted to do something to me, they could have perfectly attacked me and there wasn’t a place to run away.

2. Practicality
I realised my commute was actually taking longer than commuting on the roads because I had to stop very often to give way to pedestrians, dog walkers and other cyclists. I also became more confident riding on roads.

3. Respect
As a pedestrian, I don’t find it really comfortable walking along the canal and to have to be aware of the cyclists coming at high speed. Canals are very narrow and it’s not comfortable to have to squeeze to let cyclists, plus some riders forget that pedestrians have the priority, and that they should ride at a safe speed. And that only adds up to the general dislike towards cyclists.

For further information about Share the Space, Drop your Pace see here