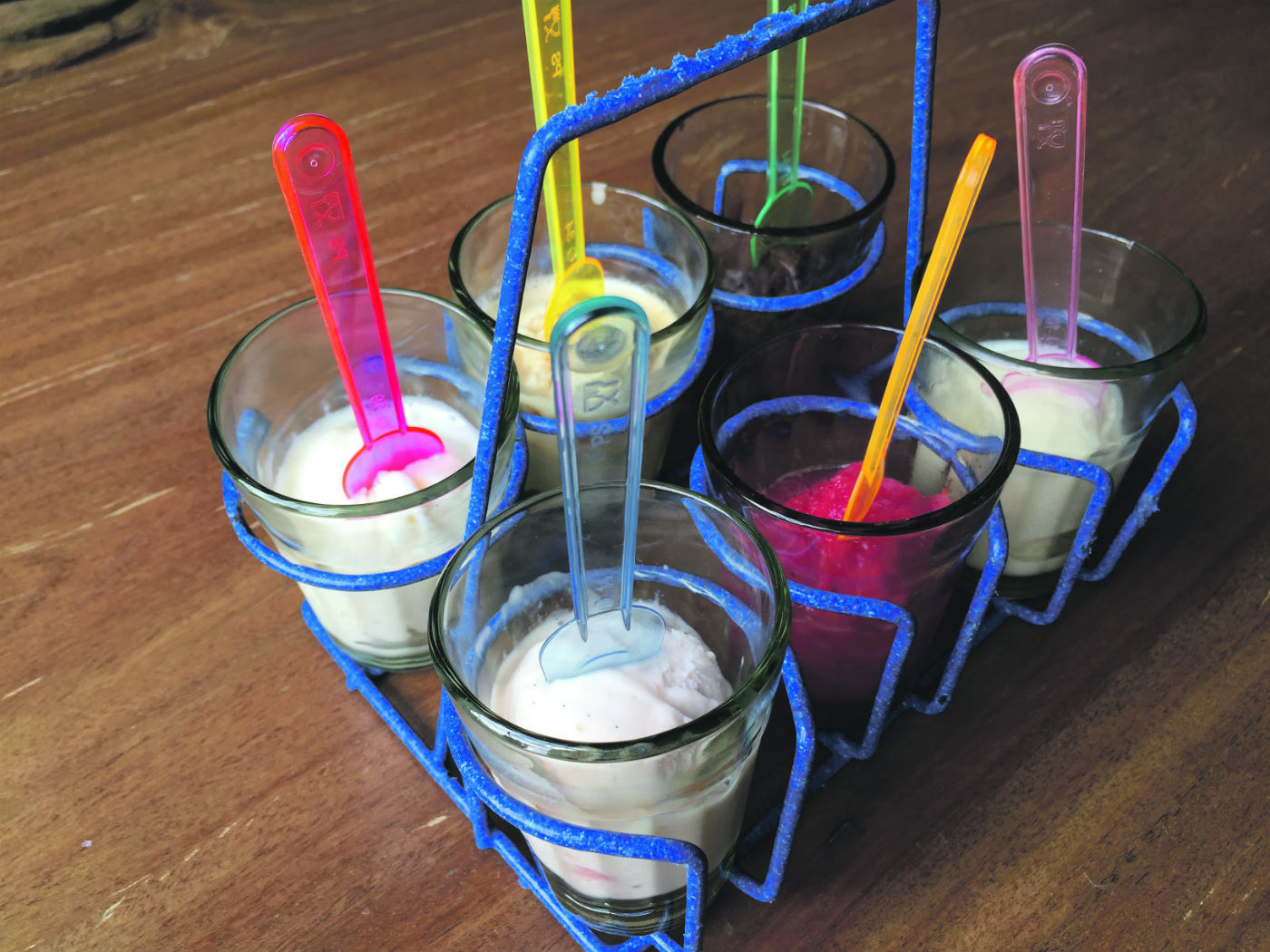 Kentish Town’s hugely popular gelateria made its debut in N1C bang in the middle of a fairly dismal summer. But no matter: it’s already proving something of a hit with locals and workers.

“We’re still making all our ice cream by hand over on Fortess Road,” says founder Julie Fisher, “and we source all our ingredients ethically. Gooseberries, rhubarb and apples are supplied to us by customers with allotments in Highgate, while local beekeepers still offer up their honey. And our mint is from a trough in the Skip Garden just off Stable Street. ”

The most captivating thing about Ruby Violet is they’re not afraid to experiment: Julie spends a half day at home per week concocting ever more intriguing combos.

So, a recent Aperol spritz sorbet was hailed a success, and she regularly whips up lavender, liquorice (“my favourite, and more popular with continental customers than the English”), damson and even rosemary chocolate flavours.

An elderflower and prosecco is on the chalkboard most days, while stilton and cranberry flies out at Xmas – “it’s a real talking point for families, especially if they don’t see each other much throughout the year,” she says.

Her craziest creation ever? Smoked salmon and cream-cheese. “We soaked the fish in milk for a day or two then took it out – it was convincingly smoked salmony, but interesting rather than a big hitter.”

Okaaay. In King’s Cross the plan is for a “glamorous” urban parlour. “We’re right on the corner of the Old Midland Goods Shed. I love the energy, the history, the spirit, the thrill of the Canal Quarter, the possibilities, the dreams, the ever changing landscape, the increasingly cosmopolitan array of ice cream-eating customers.”

And even better, in addition to an attractive sharing table created from a large piece of wood “from the bottom of the Panama Canal,” there’s a sun-soaked outdoor seating area facing the herb-scented waterfront picnic lawn.

Which all adds to the appeal of a lazy afternoon spent lounging in and around Granary Square’s fountains. “We’re like the cat that got the ice cream,” says Julie, smiling.

Each day Ruby Violet has a tricky 18 flavours to pick from (at £3 a go). But splash out for £15 and you can try six petite scoops in mint tea glasses served in a cute blue rack, a tiny plastic spoon perched in each. Water is on hand to cleanse the palate between tastes. You could share a flight between two – or just guzzle a whole one and walk it off afterwards. Here’s what we tried:

Horseradish
Don’t fear: this has exactly the right amount of both creaminess and mustardy heat, down to plenty of trial and error. “We grate the root,” says Julie, “then add it to our base mix, and leave it for couple of days before straining.”

Salted caramel
Chunky and yet smooth, chewy yet moreish. “The temperature of the sauce is critical,” warns Julie. “If it’s not hot enough, it’s undercooked and pale, and if it’s over then it’s burnt. We use two different base mixes: one is mixed in and then the other rippled through as sauce. We add almond nut brittle which is crushed. It’s the most difficult ice cream to make – and of course the most popular.”

Chocolate Sorbet
This contains no dairy so people either love it or hate it, says Julie. “We don’t always have the choc sorbet in stock and there are people that text or tweet us to rush in and get it when it comes in.”

Rhubarb and verjus
A perfect balance of sweet cream with the earthy tang of rhubarb and acidity of verjus (literally green juice), which is prepared from unripe grapes or crab apples. “This is made with produce from our customers’ gardens and allotments – they come in and swap it for ice cream,” says Julie.

Honey
What we liked particularly about this flavour is that it’s not as sweet as you’d expect; instead its notes are deep and mellow. “We get most of our honey from a guy called Malcolm on Mercers Road in Tufnell Park,” she says, “where he has a big garden with twelve hives. There’s also a Kentish Town bee-keeper with hives above the fire station on Highgate Road.”

Blood orange and Campari
Our absolute fave. Sadly – although its transience is part of the appeal – this is possibly the greatest seasonal flavour of the year. “The best blood oranges are in March or April,” says Julie, “their colour is so intense.” A big seller in Kentish Town, it wasn’t so popular in King’s Cross initially, but now everyone wants it. “The sorbet doesn’t freeze so well because of the high percentage of alcohol,” she says. “Customers complain it’s not firm enough – but when I ask if they’d prefer it with less alcohol in, they always shake their heads.”

This is box title
Open daily till 10am-10pm at 3 Wharf Road, N1C. Follow @ _RubyViolet for more info and shop times. Check out the original branch at 118 Fortess Road NW5