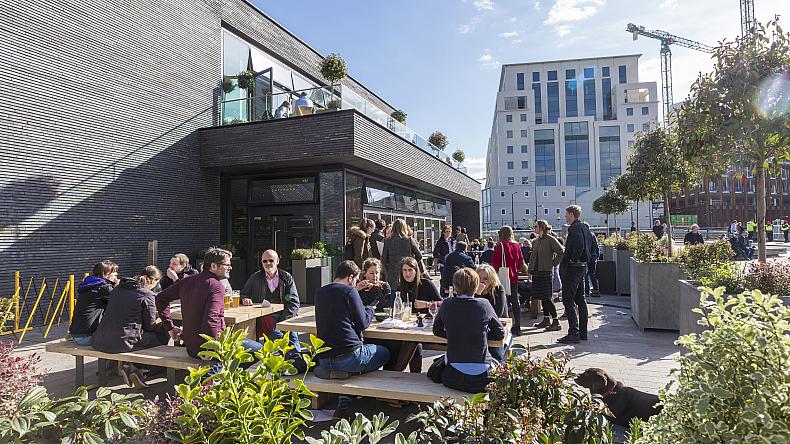 Everything you need to know about The Lighterman, King’s Cross

So what’s the yarn behind the name?
The Lighterman is so-called after the Victorian workers who operated ‘lighters’, flat-bottomed goods barges, on the canals (and the Thames, for that matter). So the name apparently reflects the restaurant’s proximity to the water, as well as the history behind it.

And it sure is a quirky looking space. What goes on inside?
Quite alot, actually. This week sees the opening of the canal-side bar with alfresco terrace overlooking the bobbing boats, and connecting the building with the shiny new towpath. But in the meantime, wander up to the ground floor for rows of wooden seating directly onto Granary Square, and a glimpse into the kitchen’s flatbread oven. Inside is a big bar that’s already packed nightly with the after work crowd – in keeping with the Lighterman’s wish to be “your new local”. Continue up the stairs to the top floor for panoramic views across both square and canal, with its own wraparound terrace. This is as formal as dining gets here, but on our visit, it was still happily laidback (see panel).

Wowsers. Who’s behind all this?
It’s the ambitious third opening from Open House, whose other joints include Percy & Founders and The Larder, both in Fitzrovia on the site of the former Middlesex Hospital. They’re also the peeps behind Cubitt House, a collection of swanky pubs in locations most Londoners rarely visit (that’s Belgravia, Knightsbridge, Pimlico and Marylebone to you and me). So we can safely say they know their onions.

What’s the vibe inside?
As you might expect for a new-build, extremely industrial: think raw materials, untouched concrete walls and pale floorboards. And those signature floor-to-ceiling windows, so folk can look outwards at either the canal, the fountains on the square or the relentlessly changing local skyline.

Who’s in the kitchen?
The big guy is executive chef Diego Cardoso, who worked his way up the ranks to senior sous chef at Angela Hartnett at The Connaught before joining her Mayfair gaff Murano as head chef. There he not only bagged a Michelin star within the first five months, but maintained it for six years. So he must be pretty good.

What are we eating?
Diego has appointed head chef Aaron Ashmore (semi-finalist on Masterchef: The Professionals 2012) to run the ship – and the menu is what they call “modern British”. So dishes include everything from well-sourced meats and seafood from the wood-fired grill to classic British cooking, spelt-flour flatbreads and weekend brunch.

A note on the architects

The Lighterman is designed by RIBA Stirling Prize winning practice Stanton Williams, who’ve contributed to the wider regeneration of King’s Cross with projects including Central St Martin’s and King’s Cross Square. “The building has been conceived as a single sculptural form to define and anchor the south-eastern edge of Granary Square,” they say. “It acts as a bridgehead building that overlooks the Regent’s Canal as well as engaging with the lower towpath running east west across the King’s Cross site. Designed as a modern addition to the location, it complements the area’s industrial heritage: the grey linear brick façade creates a dialogue with the character and tonal palette of the nearby Central St Martin’s Granary Building and surrounding Victorian architecture.”

Sure, it’s like sitting in a treehouse; or rather a glass box. On stilts. The upshot is that, in the lofty dining room, the natural light is unparalleled, whether it’s a dull grey day, or joyously sun-drenched.

On our visit it was the latter, and excited punters, still clad in thick winter coats, eagerly headed to bask on the L-shaped terrace, half cleverly covered in the event of rain. We preferred to stay inside, at a table in front of big windows, where we lapped up the view east over the cupola beyond King’s Place.

Elegant though the blond, rather Scandi interior is, our immediate concern was that the acoustics might be challenging when the room is full to capacity on a Saturday night. Even on a Friday lunchtime it was enjoyably rowdy, packed with large groups of both office workers and families (it was still the Easter holidays) all devouring burgers, as well as its fair share of Instragramming tourists.

While the menu at first glance looks rather plain (fish ‘n’ chips, steak, squid), it was soon apparent that the dishes are breathtakingly beautiful, as we’d hope from chefs at this level.

A meaty starter of chicken terrine, wrapped in green cabbage, yielded a powerful hit of fennel, with mustard-fuelled crème fraiche and a crisp sliver of chicken skin adding heat and texture respectively. (Perfect, in fact, with a robust Bloody Mary, one of a handful of tempting aperitifs). Better still was a simple smoked trout – its soft flesh ice-lolly orange – fired up by an accompanying spicy mayo, and balanced by the mild crunch of cucumber and spring onion.

For mains – washed down with a too-gluggable Loire gamay – we eschewed the list of pub classics and zoomed in on the wood grill, which uses a mix of ash and silver birch to create that all-important smoky flavour. This was definitely borne out in the pleasingly chargrilled crust of a ribeye, cooked a tad beyond medium rare, and thus not quite as juicy as we would have hoped.

But tender octopus, marinated and slow-cooked for three hours with olive oil, salt, thyme and lemon, made up for it, a tomato and spring onion salsa adding a tangy, acid hit. Sauces of béarnaise and deep green chimichurri were flawless, the latter really kicking the fishy tentacles up to the next level. And we had no complaints about side dishes of skin-on fries and the ubiquitous grilled cauliflower, either.

By now, despite the lukewarm day outside – its moments of sun shielded by big dark clouds, we observed from our perch – the terrace was full of diners eager to take a ringside seat over square or water.

Our plan was to join them for an alfresco dessert – say, a rhubarb tart or cream cheese and chocolate orange mousse – but alas, we’d missed the boat, with every seat taken.

Which, as we sipped the crema off a smooth double espresso, meant that at least one return visit, once the summer has really settled in, is inevitable.