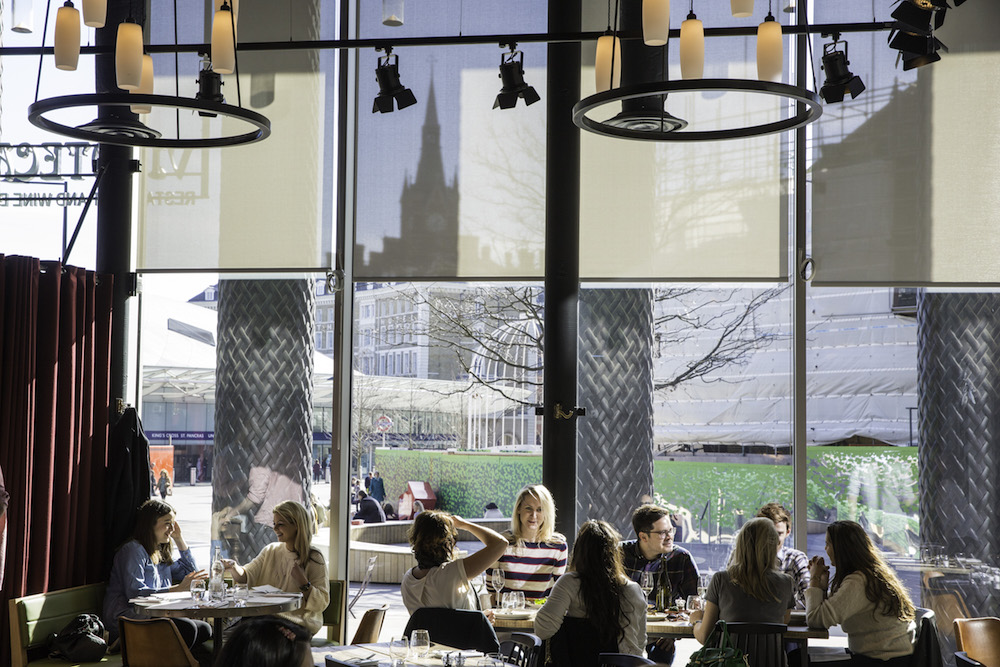 It's all about the wine and food pairings. As it's name suggests

A decade after their first shop in Farringdon, foodie twosome Brett Woonton and Charlie Young have just launched their most ambitious Vinoteca site yet on King’s Boulevard.

Based at the foot of One Pancras Square – a boozy stagger to both King’s Cross and St Pancras stations – the site cleverly belies its brand-new feel with lots of chrome and wood, a glamorous zinc bar, high ceilings, and huge windows. It’s perfect for a spot of people-watching over the main pedestrian route up to Granary Square as it’s where the fashion-forward Central St Martin’s students swish up and down.

As with other local behemoths Dishoom and Caravan, this branch is Vinoteca’s largest, with ninety covers, including a sizable outdoor terrace, surely an enviable proposition from now till at least October. It’s also the first to boast a wine shop, from low and no-alcohol varietals to bag-in-box, including two “on tap”.

The laidback, multi-tasking feel of the place means that you can pop in for an espresso by the bar, hunch over your laptop nursing a flat white, or grab a table and eat properly. Which is what we did, invited down the other day: head chef Kieren Steinborn (Alain Ducasse) dishes up simple, quality grub inspired by British classics, the Mediterranean and beyond.

The sun was out, and it was a Friday, so we chose the a la carte menu with wine pairings. A starter of grilled Cornish squid with aubergine proved softly tender, the heat of harissa injecting a little more depth; the only un-needed addition was really that 1990s salad staple, rocket. But it was all more than complemented by the quite toasty appley fizz of a 2009 Juve y Camps Gran Reserva cava.

An even better pairing was next up. A 2010 David Ramonteau Dada white – aromatic and smooth – really made our rose veal tonnato sing, laced as it was with juicy silver skin anchovies and char-grilled gem hearts. The flavours complemented each other so much that it would almost be impossible to imagine the Piedmontese dish – which can sometimes be served cold and quite tasteless – without it.

[row]
•We would prefer two options of wine by glass – one cheaper, and one more expensive, to suit different budgets.

• You can bag a £1 espresso at the bar, European-stylee.

• Service is attentive but low-key. Very King’s Cross, in a good way.

• For a special meal, the wine pairings really do make it – so don’t be shy about taking the recommendations either from the menu or the server.

Mains, thankfully, continued along this merry path. A meaty Barnsley chop was pink and juicy, although, as ever with this cut, you’re always left wanting a bit more flesh on the bone. But rare kidneys added a delicate edge, aided by a smooth Ursprung red. Oh, and the accompanying potato and mint sauce gravy was plate-lickable.

Best dish and pairing, then? Why, a Cour-cheverny 2011, Domaine de Montcy, produced from the Romorantin grape grown in the Loire, which matched a sweet, earthy mackerel that, once some sizable bones had been removed, proved the dish to return for. Pickled veg, sweet pine nuts, and salty capers all jostled happily for attention.

Dessert wines are an underrated treat, my favourite being the quite pricey Hungarian Tokaji, which adds citrus, apricot and nutty notes to any decent pud. Here they’re affordable, the same price as the desserts (about £6). A Cadillac, from Bordeaux, added sweetness to a dense panna cotta with rhubarb; but it paled next to semifreddo with salted caramel sauce and praline. Accompanied by a Portuguese Moscatel, this pairing evoked an almost symphonic movement of sweet, creamy and salty flavours, with lashings of textural juxtaposition thrown in for good measure.

And if this all sounds a bit, well, beyond your budget? Fear not, there’s a set lunch menu (a reasonable £12.95 for two courses), for savvy types who just want to make Vinoteca a bit of a regular weekday habit.