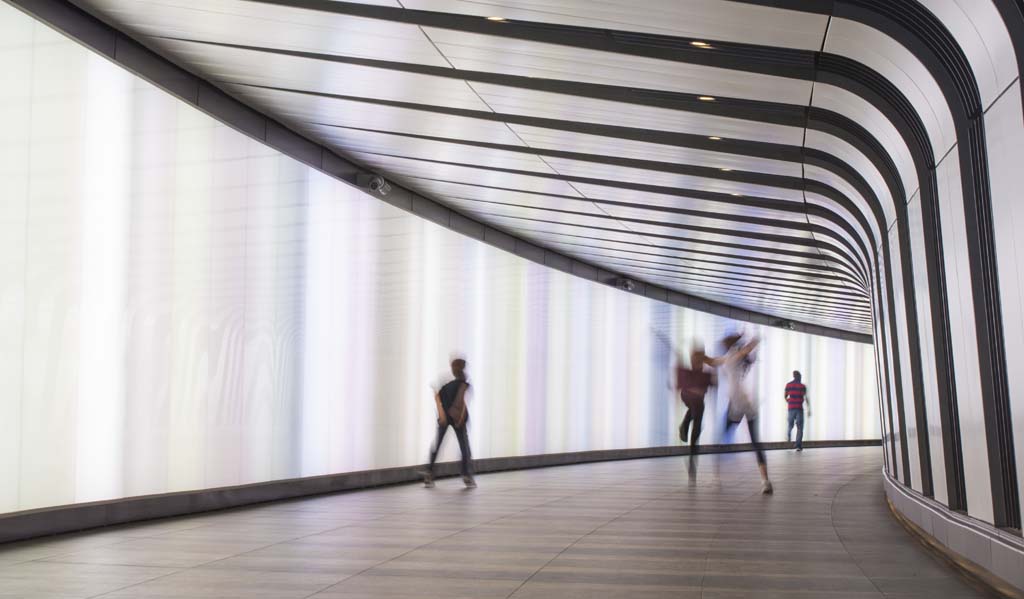 John Sturrock has been entrusted with a unique task. Armed with a camera, his assignment – for the last seven years – has been officially documenting the development of London’s new N1C postcode.

Featured on the cover of our current print edition is this striking image (above) from the bowels of One Pancras Square: the newly opened space-age pedestrian subway leading to King’s Cross Undergound Station.

“I had to convince passers-by to dance around as wildly as they could,” he says with a smile, “to add a sense of movement to a picture which might otherwise have looked sterile.”

And John’s a busy boy these days. The official snapper for Covent Garden and Spitalfields markets too, he says that “King’s Cross is the one that really feels like home. I enjoy the way locals are positively encouraged to come and laze around the fountains, the gardens are open, and there are no intimidating security staff. It’s totally unlike most developments. I spend a lot of my life here and it makes for great photos.”

So how did he get started? “I did a physics degree in the 1970s in engineering research,” John explains, “so had a camera to go and record work in the field. But I soon decided I much preferred taking photographs to sitting in a lab. There was a lot of social action in those days – strikes and demos – and as a student I was right in the middle of it. So I found myself taking more and more pictures.”

Deciding he needed a formal training, John approached an agency whose work he liked. It turned out to be run by photojournalism legend Simon Guttmann, who’d walked away from his pioneering agency in pre-war Berlin to become an advisor on the Picture Post in the UK.

“That was my training ground, which led to work with Socialist Worker,” he says. “By the 1980s I was one of ten photographers who set up our own agency in a little room over a tobacconist in Kentish Town. Slowly it grew, we ended up in Hoxton and had a turnover of over £2m a year, but digitisation was coming and we were too slow to adapt. We watched our market disappear.”

Thrown to the sharks of progress, John managed to apply his photojournalistic style to another sphere of rapid change – the very fabric of our city. Starting off with a commission at Spitalfields, he recorded the transformation of one of London’s oldest markets, and the area’s faces, as the financial district expanded all around.

Now John is in demand on similar projects city-wide: he’s just about to embark on capturing the demolition of Earl’s Court.

Building work is not the easiest subject to capture though. “Construction looks pretty gruesome most of the time,” admits John. “It’s messy, grey concrete against grey skies. But there have been a few moments when I’ve been able to catch a site over perfect cloudless blue, or at dusk with flood lit areas. That’s what makes a really powerful picture.”

His favourite KX moment to date? The free Africa Express concert in Granary Square (pictured above), a one-off chance to make use of the space for a large-scale gig before the building works began in earnest.

And finally, what’s he most looking forward to in the years ahead? “The opening up of the new public garden square alongside Stable Street will be great, as will the freshwater outdoor swimming installation. I’ve got high expectations for the Coal Drops becoming a vibrant destination. But the architecture of the new Google HQ – now that’s going to be a stunner.”

Get a profile the old fashioned way. I still think the one-in-ten rule is key. Meet people, get through the door, sit down with them, show them your work and still nine out of ten won’t respond. But it’s the best way to find the one that does.

Showcase your work. When I started, we used to take out big folio books. Then you needed a website, but now I believe presence on social media is what it takes. You’ve got to feed your online profile. There’s a sacrifice, since people will always take some of your work without permission, but you have to be willing to give a little to receive.

Passion is almost enough, but not quite. Technology today makes shots that were previously unimaginable feasible. It means that anybody who has a passion for it can take photos, but to make a proper living from photography, you need to be there when the client needs you. Doing what I do, that might be on a Sunday lunchtime or in the middle of the night.

With digital, we’ve lost a lot of time. People won’t pay for post processing in the way that they used to when film went through a lab first. That means your work has to look great very fast, and that involves late nights in front of the computer after a shoot, often several nights a week.

This is box title
For more of John’s work, visit johnsturrock.com