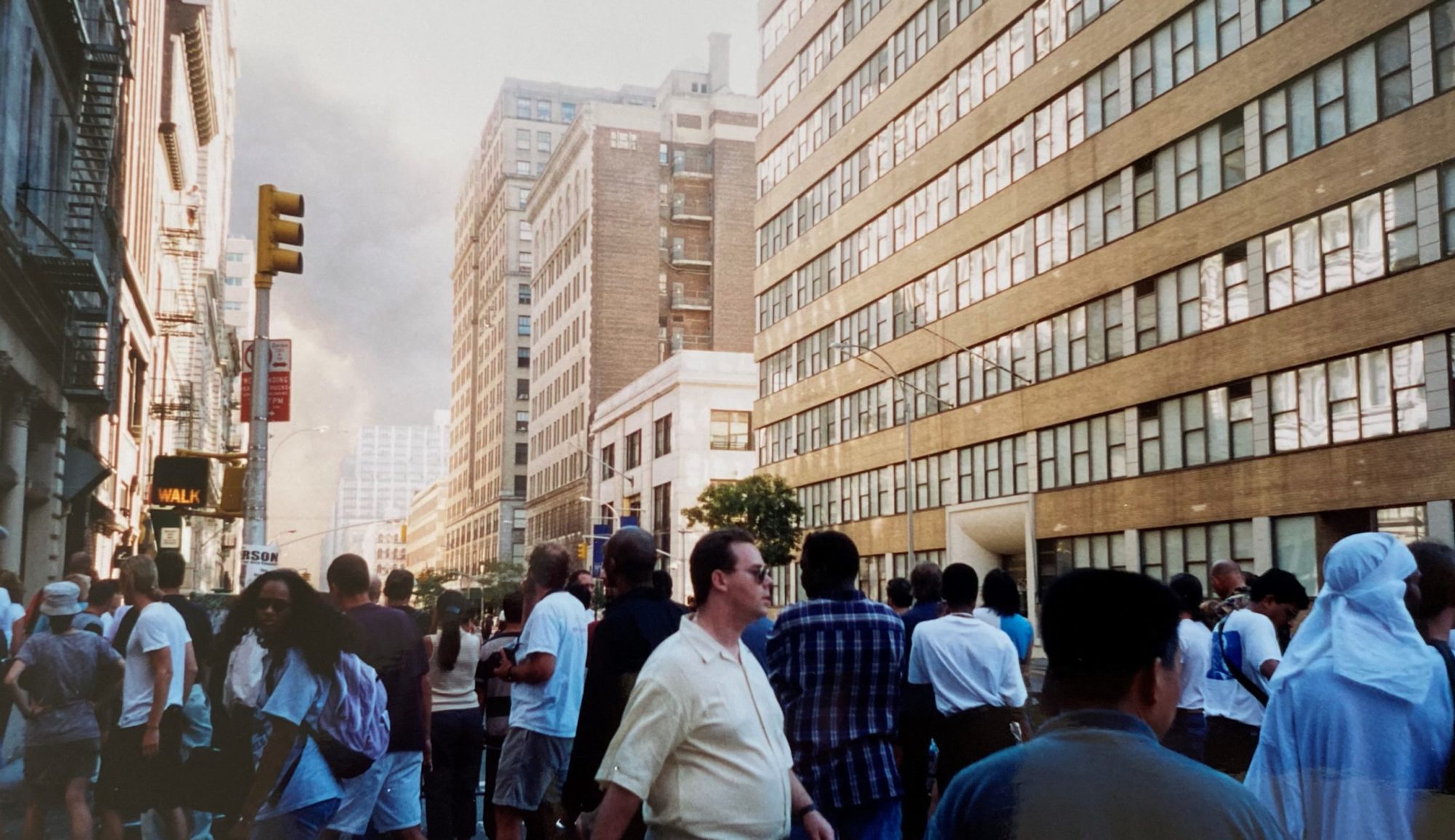 9/11: an eye-witness diary from the Tribeca Grand Hotel

Back in 2001 I was a 26-year-old publicist in the music industry, my roster mainly consisting of the superstar DJs du jour and pop groups with eye-watering major label marketing budgets.

On September 10th I flew from Moscow to New York, staying at the Tribeca Grand Hotel (now the Roxy) for a Smash Hits cover shoot with the boyband Blue, who were about to have their first number one record in the UK.

We arrived in torrential rain and called the day’s shoot off, easily imagining there would be time the following morning; a boozy night with the record company and girl band Atomic Kitten, who were also in town recording a single, followed. Little did we know what would then happen.

These diary extracts, written as events unfolded on September 11th and the days afterwards, remain unedited, with minor tweaks only for repetition and a sense of clarity.

11.19am
Both towers have now gone. The Pentagon has been bombed. No-one can enter or leave NYC. When the first tower collapsed, I’ve never seen anything like it. We ran into the street and people were pouring down, crying, gesticulating, shouting. Smoke everywhere; cars covered in soot, ash, debris. All you can do is stand, helplessly, observing, impotent. Civilisation is built on such fragile foundations. I realise now that nothing will be the same.

1.30pm: my hotel room
The scene has settled. I look out at the quiet streets, quiet save for the constant sirens that is, as police cars and ambulances speed down deserted routes, dust and debris flying off them. People start again to go outside; traverse the battleground of the city: stop, stare, cry. New York, the “greatest” monument to modern civilisation, brought to its knees by terrorists. How many people killed? How many helping them are also dead?

5.54pm
The third building has collapsed; fire engines are roaring in; hopefully the worst is over. The police cars are covered in ash, asbestos and more ash: the sirens echo all around. The eeriness earlier here was disturbing. It felt like we were on Titanic in a stupidly decadent, wastefully extravagant palace. People are sipping cocktails at the bar: wilfully ignoring what’s happening or drinking to forget? It feels wrong to eat, wrong to breathe amidst this disaster.

Overheard on a mobile: “We think we’ve lost my girlfriend’s Mum. She’s gone.” But we mustn’t let our spirit go; we must never give in. I just hope the worst is over.

10.35pm
So, the day I thought would never end finally draws to a close, the day that saw thousands of people die, the longest day of my life. The evening descended into a swirl of booze and uneaten food. The Atomic Kitten girls turned up. Everyone here is safe. We just all want to get the hell out. I have never, and will never, experience a day like this again. Apparently there is now asbestos in the air, too.

11am
And then I wake up. And it’s all a dream. Except it isn’t. I look outside, at the rising sun creeping round the building at the end of the backstreet, deserted except for a line of white ambulances, and realise nothing, and everything, has changed.

The search for bodies begins. The heroes dig for firefighters trapped in voids, the level of humanity in the air is there, coupled of course with anger, resentment and incomprehension.

We are about to take a walk within our boundaries and all we can do is wait. There are no phones, email, no outside lines. This once-glamorous hotel feels like an island, divorced from the outside world. No-one can get in, and we can’t get out. Supplies lesson. No hot water. No bread. But we are not suffering, of course compared to others who’ve lost mothers, fathers, sons and daughters? We’ve escaped; suffered nothing.

1454
We have to leave now. Too much asbestos in the air outside. We’ll get there. We’ll be OK. Won’t we? I am OK, but it is a little scary outside.

21.24: Tarrytown Hilton, New York State
Can the days get any blacker? The air got worse and worse, the fumes greater and greater, we donned our masks, squabbled over the payment of the hotel bills, and walked for 40 mins laden with luggage, for a train to the Hilton in Tarrytown – with its “11 glorious acres!”. All we can do is sit and wait for flights to be resumed.

2am: Tarrytown Hilton
A boozy, karaoke-filled night with the Atomics and Blue at the bar: a soundtrack to nothingness, the bleak emptiness that we feel. I want to go home, and leave all this behind.

Three days in Tarrytown with the Virgin Records posse has had its more surreal moments. On Thursday we took a grey, nihilistic trip to the Mall (“the second largest in the US!”), making aimless purchases from chain stores. I barely touched a heaving sandwich of steak and mayo, watching the sorry sight of faceless souls drifting through the grey concrete.

Last night’s rain was replaced by sunshine today as everyone in the record company battled out our journey home, from mooting crazy suggestions like private jets to eventual securing tickets on tomorrow’s flight. I rise at 230am to leave. Will life back home resume its normal path? I can’t see it.

Today I met a woman who lost her apartment on Tuesday. And then in Abercrombie & Fitch in the mall the man serving us had lost his sister. “She’s out of pain, that’s the main thing,” he said simply. “She always believed in a higher place.”