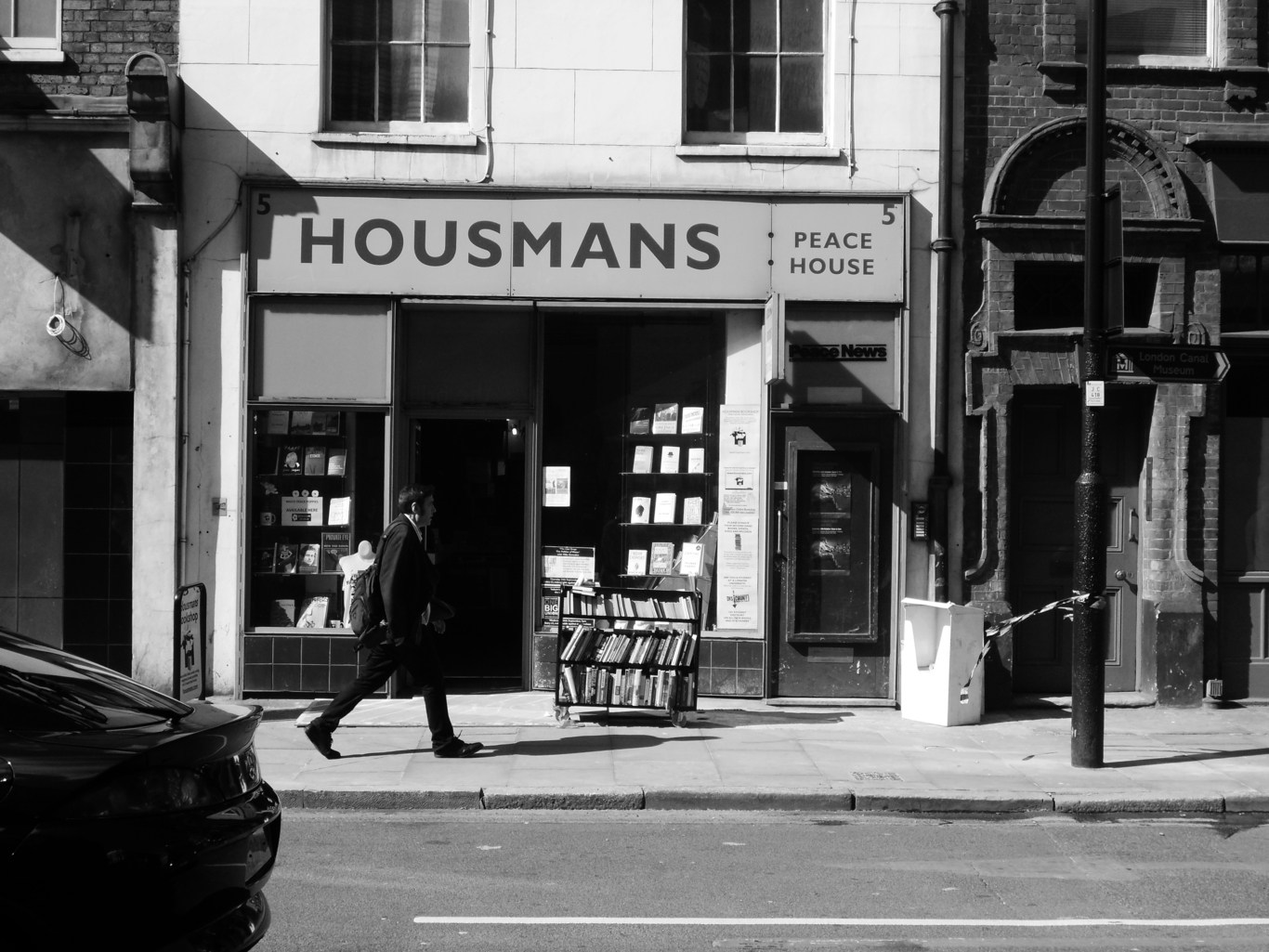 Housmans: the story of a ghostbuster and a radical bookshop

ousmans and the peace movement have been, from the start, part of the same fabric. 5 Caledonian Road, the site of Housmans bookshop for almost sixty years, is known today as Peace House. Spread over six floors, it has provided a home and a refuge for a huge range of anti-war and allied causes. Nowhere has been more important in sustaining a radical tradition in London.

But exorcism? It’s not that there’s a necessary contradiction between pacifism and exorcism – just that they don’t have any obvious common ground. Yet Peace House would never have been established without the support of an exorcist.

In the months after the Second World War, Housmans bookshop – linked to the Peace Pledge Union – was set up in war-damaged premises on Shaftesbury Avenue. It took its name from Laurence Housman, a writer and longstanding socialist (and younger brother of author A.E. Housman). So it should really be Housman’s – but it isn’t. No one knows why there’s no apostrophe.

After three years, the shop closed because of spiralling rents. But the business kept going, largely as a mail-order service and providing bookstalls for meetings and events. It shared first-floor rooms on Blackstock Road with Peace News, which started in the mid-1930s.

Towards the end of the 1950s, the intensity of the Cold War and the alarming prospect of nuclear conflict led to a resurgence of the peace movement and demands for nuclear disarmament. Leafing through back issues of Peace News – and what a good paper it was, published weekly (it now comes out every two months) and costing sixpence – you get a sense of the temper of those times.

In the spring of 1959, the paper announced the prospect of ‘a new home for Peace News’. Tom Willis, a curate in East Yorkshire, had just received an inheritance of £10,000 and wanted to give a donation which would make a difference to the anti-war campaign. He quietly asked a couple of peace organisations what use they would make of a sizeable gift. Harry Mister, the manager of Housmans, came up with a concrete proposal: to buy the freehold of a central London property which would act as offices, bookshop and resource centre for the peace movement.

Tom Willis eventually provided £5,000 (the equivalent today of £120,000) to buy 5 Caledonian Road. A group of young volunteers lived in the building while they were doing it up. In July 1959, Peace News moved in. By November, the work was complete and Housmans opened. Peace News published a photo of the ceremony attended by Tom Willis sporting his dog collar and by the renowned writer and pacifist Vera Brittain. Willis had intended to remain anonymous but said he was ‘outed’ to the press by Brittain, which led to embarrassment: his family weren’t too pleased and his parishioners wanted to know why he wasn’t giving the money to church funds.

“First of all, Housmans was only the front bit of the ground floor – we took on a stationery side and general books for the local community as well as our pacifist stock,” Harry Mister recalled some years ago. Peace News had most of the rest of the building. London CND made good use of one of the basement rooms; a pacifist publisher had a toe-hold on an upper floor; and tenants, “a charming old couple”, at the top.

Housmans now vies with the anarchist Freedom Bookshop for the title of the country’s oldest radical bookshop and with Liverpool’s News from Nowhere for that of the biggest. Although the peace movement owns the property, so Housmans has the cushion of an understanding landlord, it’s faced some bumpy times.

“There was a moment thirteen or fourteen years ago when we were in a lot of trouble,” say Nik Gorecki, the longest-standing member of staff. “We were on the verge of closing. We decided to concentrate on what we do best – so we made a conscious decision to only stock books that fit our political profile.”

The rooms above and below the bookshop have been a base for dozens of campaigning organisations that would otherwise have struggled to find offices, including the Gay Liberation Front, the London Lesbian and Gay Switchboard, War Resisters’ International, the Campaign Against the Arms Trade, Pax Christi and the King’s Cross Railways Lands Group.

London Greenpeace was based here as was the linked McLibel campaign – attracting so many alleged spies from the police, security services and McDonalds, at some meetings, it’s been suggested, there may have been more agents than activists. Housmans sports a blue plaque with a difference, endorsing the Campaign Opposing Police Surveillance (COPS) and recording that ‘Peace, Environmental and Animal Rights Campaigns meeting here were spied on by undercover police officers.’

When Housmans held a party to celebrate their 50th birthday at 5 Caledonian Road, Tom Willis came along, happy that his gift had delivered such a dividend. “It’s been a marvellous thing to see the list of some fifty organisations who have used Peace News offices and rooms,” he told Emily Johns of Peace News. “And so I’m really pleased to see how much it has been used and how many organisations it helped.”

Willis – who died in 2014 – achieved renown in a very different area of endeavour. Yes, he was the exorcist – indeed the Daily Mirror described him as ‘Britain’s leading exorcist’ with half-a-century of experience in driving out ghosts and poltergeists. He was for many years the Archbishop of York’s official adviser on occult disturbances.

“Ghosts certainly do exist,” he insisted. “If you suspect there’s evil around, don’t attempt to deal with it [yourself]…When a clergyman comes to perform an exorcism, you’ll need to celebrate communion in your house, commanding any evil to depart and any restless soul to go in peace to that place appointed for it.”

So he was both peacenik and ghostbuster – but Emily Johns recalls that when they met, the clergyman seemed “more excited about exorcism than about the peace movement.” Pacifying poltergeists is, after all, probably a lot easier than achieving global peace.