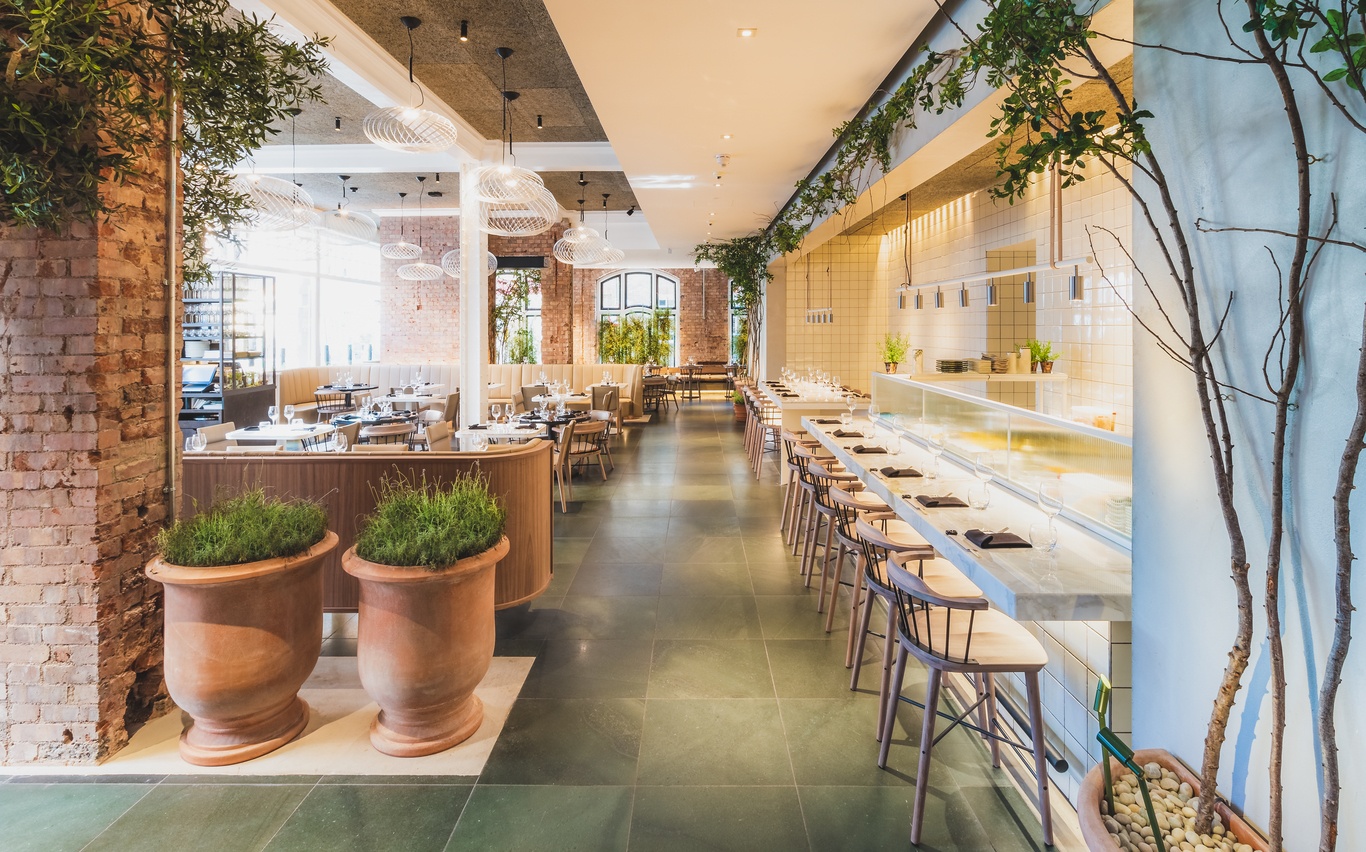 Where exactly is it? On Bloomsbury Street, silly. Well, actually, it’s more like Gower Street, currently in the throes of a radical reworking of both pavement and street furniture (ie it’s a traffic-jammed hell-hole for the foreseeable).

OK. So what goes on there? Well, it’s the onsite restaurant of adjoining pile the Bloomsbury Street Hotel. And last month the now off-trend Steak & Lobster was reinvented as a rather chic dining destination. It’s sister to similar joints in Mayfair, Leicester Square and Manchester, but the twist is here there are two menus – one is what they label ‘Contemporary Mediterranean’, the other Japanese.

The interior: discuss. The idea is that the design mirrors the food, taking equal inspo from “Mediterranean gardens” and a “minimalist Japanese aesthetic” alike. So it’s all white-washed exposed brickwork and clusters of indoor plants to engineer a feeling of calm. The glazed porcelain tiled open kitchen has a counter with stools, should you wish to perch and watch over the action, while banquettes and low-lighting feel a meditative world away from the noise beyond the window.

What should I eat? Faced with a twin menu is a little like being in two restaurants at the same time, one foot in each. But once you get used to the concept it’s quite fun. We started with a flurry of delicious raw fish dishes – after first slamming our paws in a bowl of insanely buttery edamame beans. Yellowtail sashimi came floating in a sea of spicy, citrusy yuzu soy, while a superior salmon tartare was served on ice with cute tiny spoons to attack it with. Best of all was a dish from the Mediterranean side of the menu: delicate wafer-thin discs of translucent sea bream (above), uplifted by sprinkled zest of aromatic Amalfi lemons, curls of spring onion and teensy cubes of apple. A corker. One to swerve? Ruby-red tuna sashimi on a flat taco, slightly overwhelmed by its truffle ponzu mayo.

I don’t eat fish. You’re still in the right place. The best plates may even have been our meaty ones. A signature seared beef tataki was sliced in pink marbled strips (although, once again, that truffle ponzu wasn’t really needed). Meanwhile the portable ceramic Bincho grill – or Fire Bowl – served smoking at the table, complete with hoba leaf, is a theatrical must: the chill-and-lemon-roasted baby chicken was, we agreed, one of the most succulent thighs we’d recently had the joy of tasting. And, at £12, this is no rip-off; and the sake-flamed black prawns with chilli were also delectably juicy (see pic above).

The overall top dish? In fact, it was the last thing we ate: a trio of herby lamb cutlets (from the Mediterranean side of the menu), their exterior charcoal-grilled, sensationally ruddy mouthwatering flesh no bigger than a 50-pence piece, with three rich blobs of hummus for dunking pleasure. Only question: when it’s a sharing-plates restaurant, why give three? We wrangled over the last. Maybe that’s the point.

And what do I drink? House cocktails proved a strong game: a sherberty Sicilian V & T matched citrusy vodka with blood orange liqueur, Aperol reduction and tonic; while a Cereza Negroni shockingly replaced gin with vodka and added cherry flavours that ultimately proved a little too, well, cloyingly cherry-like. There’s a ton of sake too, if you prefer; or do as we did, with a last blast of summery Mirabeau rosé to match both fish and fowl.

What’s the service like? Delightful: an unexpected initial mix-up with the booking was smoothly and swiftly resolved, with almost too many staff whisking plates away and asking how we were finding each plate. (It’s a new opening so fair enough.) We liked the nautical outfits too, all pale and dark blue combos.

Do say: ‘Sashimi! Carpaccios! And that chicken!”

Gasholder ate as guests of BSK. For more on our food reviews policy see here