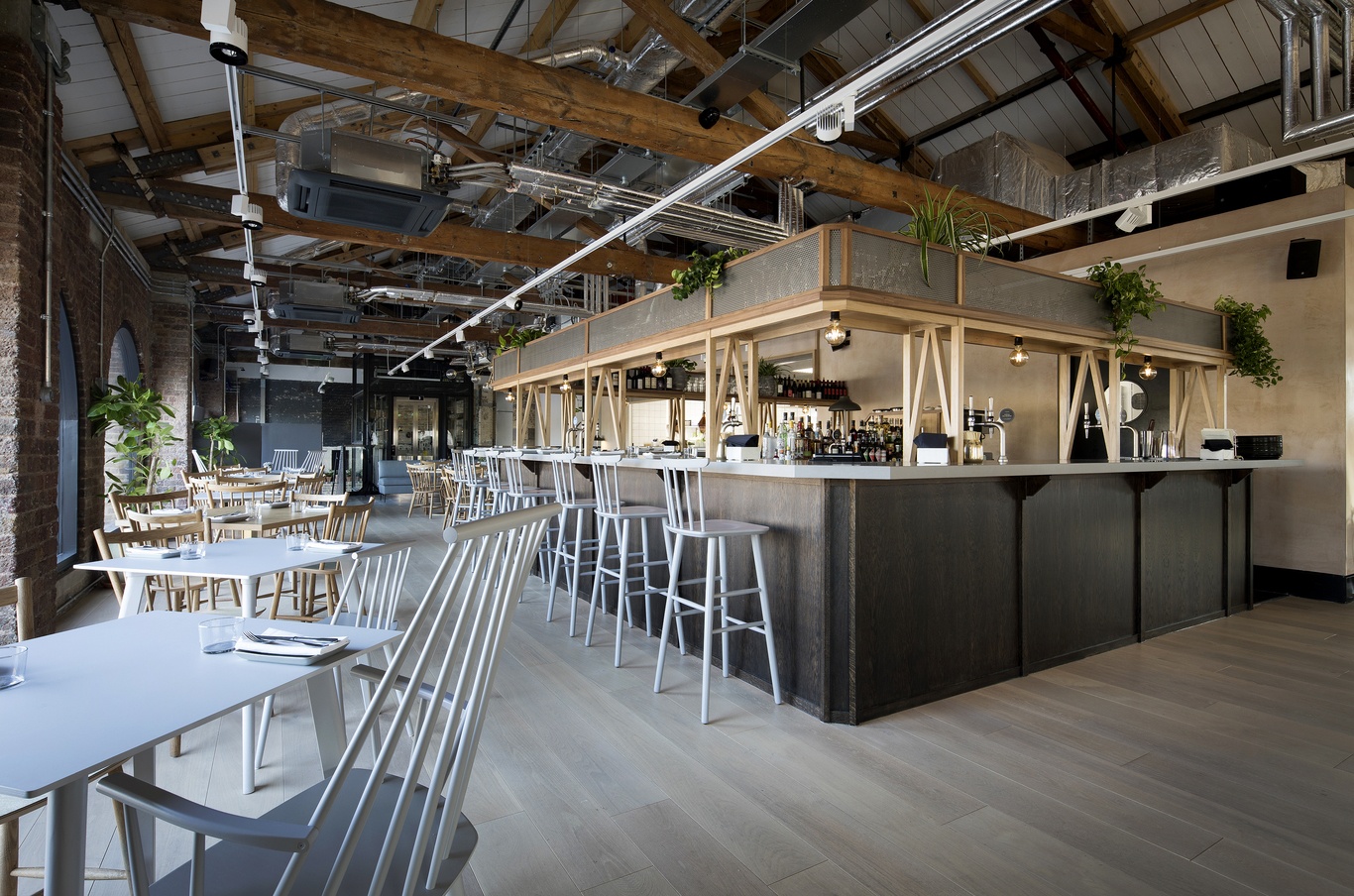 Previous incarnation: Derelict. Rewind a decade or two and the place was jumping as part of the infamous Bagley’s nightclub.

Where exactly is it? Coal Drops Yard: more specifically, this airy 80-cover restaurant is on the top floor of the rather lovely Wolf & Badger many-tiered lifestyle store.

What goes on there? Some fine but exceedingly relaxed drinking and dining. It’s ex-Murano chef Pip Lacey’s first standalone restaurant following her win on Great British Menu 2017; and co-owned by her old pal Gordy McIntyre, with backing by mentor Angela Hartnett.

So it’s quite a thing? Yep, in fact, it’s cleaned up with the critics and already made industry bible Restaurant Magazine’s Top 100 in the UK, straight in at 48 no less (higher than the Fat Duck at 58). That means it’s the only restaurant in King’s Cross to make the list.

The interior: discuss. It’s hard not to be dazzled by the space: big west-facing leaded windows allow pleasing daylight into the dining room, its tables scattered about, none too close together. Most impressive is that, despite being entirely full on our visit – and a huge army of serving staff buzzing to and from the rather small pass – there was no ungodly racket. The space seems to absorb noise effortlessly (even from a very young tot just a couple of tables away).

And exterior? Well, this is where Hicce comes into its own at this time of year. The new “living botanical terrace” is essential if you like to watch the summer sun dip across the canal: we instantly decided it’s one of the best spots for sundowners in London (read more about those here.)

Hungry now. What should I eat? From the top of the menu, choose an item from each of the small-plate sections directly beneath – seafood, veg, meats – which are then combined on a board to create a sharing platter. Recommended is pistachio saucisson, all textural deliciousness, or the deeply meaty, loose mushroom terrine. Fish-lovers, meanwhile, might prefer outstanding boquerones with red chilli, leek and toasted pine nuts, or terrifically vivid red salmon (vacuum-cured for just a couple of hours) with its juxtaposing hits of wasabi and apple. To accompany this was feather-light beer bread, and a speciality pickled jar of cabbage, sprouts and caraway. It was all so good we returned a couple of weeks later just to order it all over again.

And then what? Don’t worry, you won’t be full: portions are restrained. So take a foray into the middle section of Hot Sticks, yakitori-style skewers that are both tiny and effortless to eat. Tender Turkish-style lamb came adorned with almond and salsa verde, while wild red prawns were smothered in herby butter, their carapace so soft you can crunch them down (and suck the head, of course).

How about mains? We shared three midsize plates, but you could easily do just two. Charred hispi cabbage was a radical reboot of the perennially unexciting brassica, with tangy sumac, chalky cassava and a silken grey pool of sesame yoghurt. While tasty, it paled somewhat next to a spectacular octopus dish, its charred tentacles each as on-point as the next, all doused in a quivering orange pool of cured egg yolk. As if needed, scattered almonds and a petite stew of sweet pepperonata offered citrus and earthy notes, too.

The must-have? One of the best-value, in fact: a glisteningly golden-skinned chicken thigh, perched on white asparagus showered with hazelnuts and mushrooms, alongside a hillock of watercress salsa verde (just £10). The meat? Air-punchingly butter-soft. We can also highly recommend, on a subsequent visit, the bavette, red onion and miso mustard lunch bun.

To finish? If you’ve never tried a duo of apricots in tempura, do not hesitate: splashed with vivid green basil sauce, they snuggle up to a boule of almond ice cream, strewn with almonds.

What do I drink? Cocktails aside – and the list is extensive – the wines are inevitably minimal intervention and organic. There’s good quality on tap – such as a gamay – but a recommended Austrian Zweigelt was fruity, dry and exactly right for the eclectic dishes.

What’s the service like? Laidback, friendly, with efficient staff. But fear not, there’s no ultra-food reverence here, underlined by the hedonistic soundtrack, all 90s Ibizan hits, and weekly Sunset Sessions (see below), both nods to the building’s clubby history.