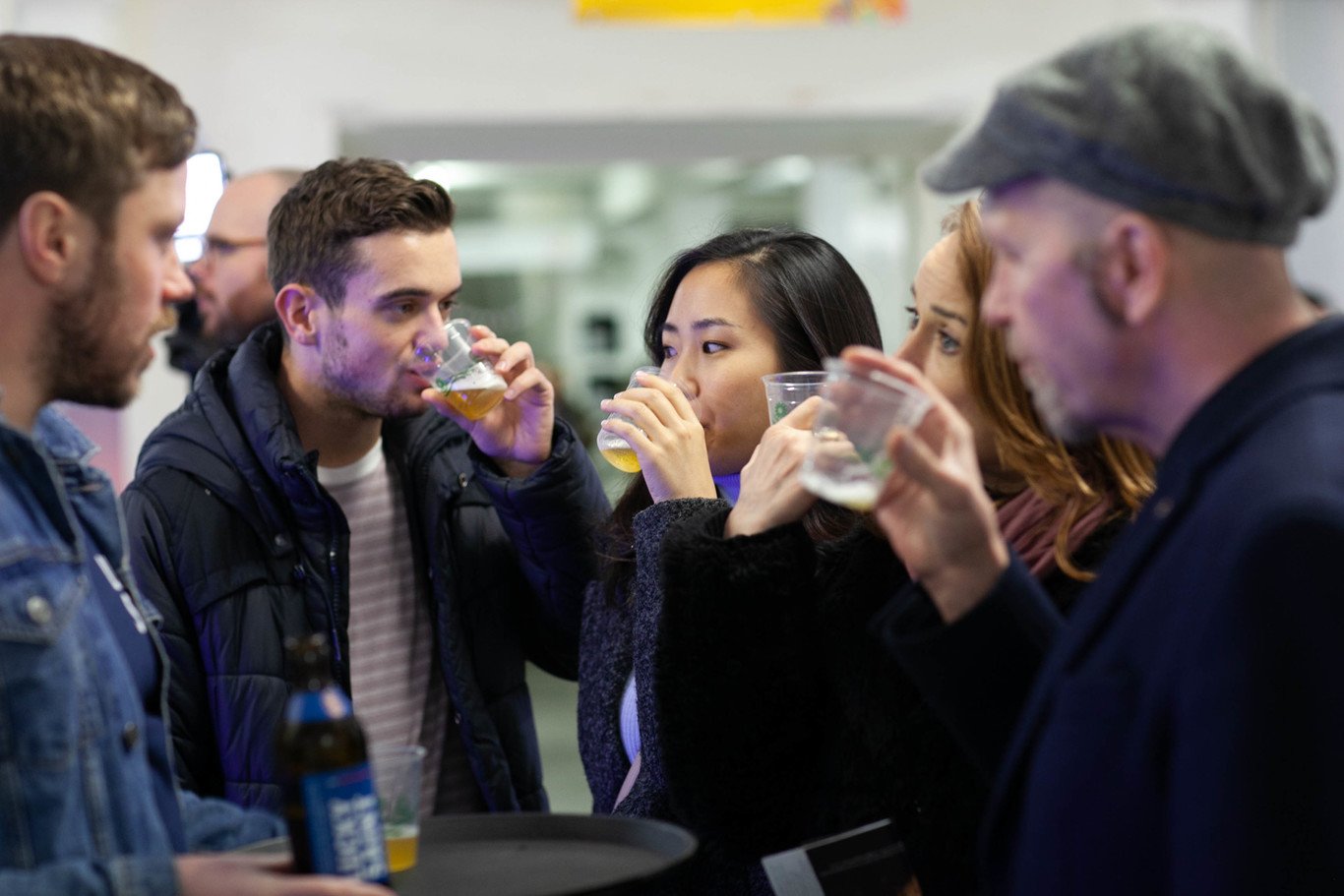 Sure, I’ve enjoyed experimenting with alcohol-free (AF) wines and beers several times over the years (read an earlier account here), but one weekend will remain a significant notch on the post.

Why? Well, it’s refreshing how much fun you can have with hundreds of other like-minded ‘sober curious’ types.

The occasion was the Truman Brewery’s Mindful Drinking Festival; to say it was busy would be like suggesting a negroni is not especially alcoholic (as I have been known to).

This fifth event, produced by Club Soda, a duo of Laura Willoughby (read our interview with her here) and Jussi Tolvi, saw a whopping ten thousand attendees fill its rooms over one weekend. It was a powerfully good-natured crowd of punters, stall-holders and motivational speaker types.

Despite my starter-knowledge, which includes an easy appreciation of Brewdog’s convincing Nanny State (O.5%) and even Heineken’s respectable 0.0%, it proved fascinating that wintry afternoon to sample a mind-boggling plethora of beers, ales, lagers, gins and other AF spirits from the sixty – count ’em – stalls. That’s a lot of combos for any palate, as my friend and I realised when we stumbled back onto the street. Sober, of course.

What constitutes alc-free, anyway? Many beers, wines and spirits contain up to 0.5% ABV, according to Alcoholfree.co.uk. But fear not, it’s really not possible to get drunk and – and this came as a real surprise to me, too – many basic foods actually contain a similar amount of alcohol (and aren’t labelled as such).

Fascinating stat alert (according to Steady Drinker): there’s 0.2% alcohol in malt vinegar, 0.5% alcohol in a ripe banana, 0.7% in fresh orange juice and up to 1.28% in some rolls – all products we wouldn’t think twice about gobbling down freely. Furthermore, the amount of alcohol in a pint of 0.5% beer is tiny – half a teaspoon compared to a heady five in a pint of 5% beer.

And for those that think AF beers are pointless because you get all the calories without the squiffy hit, this is easily countered: they average about 60-70 a bottle rather than 120. So you’re not going to put on a whole lot of pointless pounds. (Incidentally, a pint of Camden Pale Ale is 140, whereas 5% ABV beers like Hell’s come in at 238, with Peroni scaling a lofty 309.)

But the main learning on my adventures these last two months is that AF beers (and to a lesser extent, spirits) are genuine placebos for the brain: that is, they work as a reward or treat – something you look forward to – as you would a real pint at the end of the day.

Wines
Most convincing of the varieties we tried at the Mindful Drinking Festival (but not especially vino-like) was Woodstar red, a light yet complex blend of acai berries, botanicals and cocoa with a 1% proof. Within minutes the affable owner had convinced us we needed it to accompany seared sea-bass (and my friend snapped up two bottles). But overall, for my palate, these drinks were too sweet, as in evidence with Outfox’s Sauvignon or the 1688 Grand Cuvee rose.

Spirits
We rated Ceder’s refreshing AF alt-gin over, say, Seedlip (notable by their absence at the MDF, in fact), as well as Caleño, a tropical flavour of juniper and inca berries. Elsewhere the Temperance Spirit’s refreshing gin and tonics nearly hit the spot and most notably, the 0.5% Bitter Note is a corker of an Italian aperitif perfect for Campari lovers like ourselves.

Beers & Lagers
As mentioned earlier, for me these are the AF drinks with real power, not just moreish but also value-for-money (most are around £2 a bottle or can, some cheaper in packs). Most have a 0.5% ABV or less: Nanny State aside, dazzlingly good is E20-based Infinite Session’s Pale Ale, a juicy craft beer which tastes (at least to this writer) pure Beavertown; not far behind is Leyton-based Nirvana Brewery’s Tantra and Karma varieties of pale ale and Sutra, a floral IPA.

The best lager by a mile? Lucky Saint, an attractively golden colour with a good head when poured and with the clean, savoury notes of a Czech pilsner. Others that stand up are Pistonhead’s decent double dry-hopped Flat Tyre, with its citrus-tinged fizz, and FitBeer, a crisp, gluggable Helles-style lager with 66 calories.

Want to find out more about the alcohol-free movement? Read our accompanying interview with Club Soda founder Laura Willoughby here.