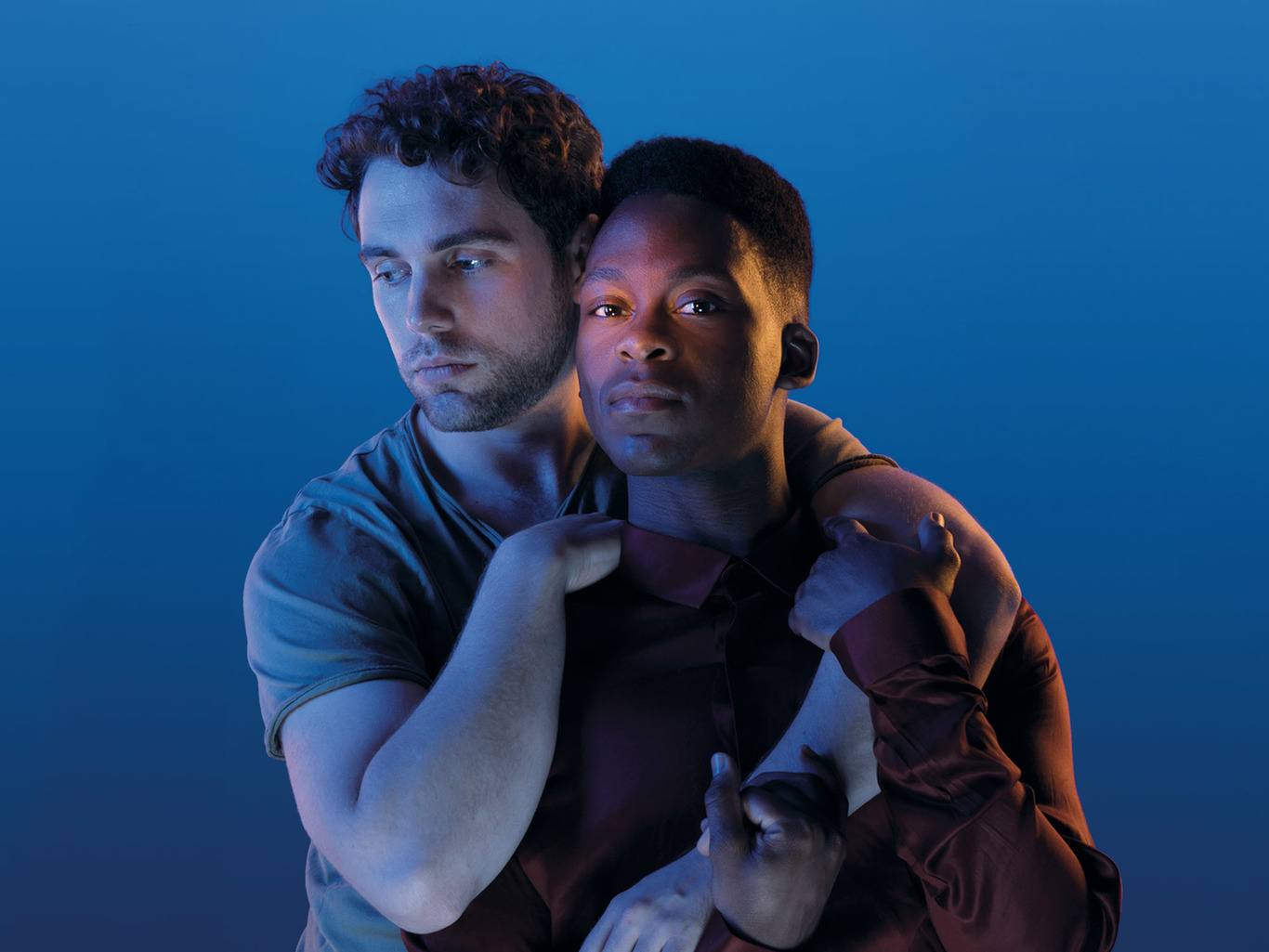 The undisputed highlight of this febrile new play takes place at about the halfway point, over a family dinner.

In fact, it’s a little more complicated than that: the parents of a gay couple are meeting for the first time, a few days before their sons are getting married. You can probably picture it now.

Yes, slow motion: acutely styled physical movement plays a key part in the play’s direction, by none other than Robby Graham, who choreographed Angels in America.

Written by Matt Jones (whose telly credits include Doctor Who, Mr Selfridge) and Bloc Party’s Kele Okereke, Leave to Remain is a timely – and agreeably far from well-worn – story. Its simple premise is that high-achieving Obi (Tyrone Huntley) and ex-addict Alex (Billy Cullum) are a successful young gay couple living in a warehouse flat in Shoreditch. When American Alex’s visa comes into question, with a possible work relocation to Abu Dhabi, they decide to get hitched, which means confronting their very different upbringings.

The way the play weaves its themes feels fresh; after all, how many musicals are there about gay marriage, even now? And there’s much truth in the fact that same-sex weddings still, even in 2019, have an ability to unnerve family members, whether liberal or god-fearing, even if they’re supposedly resigned to their offspring’s homosexuality.

There’s also a sadly all-too-common belief deep within Obi’s core that as a gay son feels he has in some way failed his parents: therefore he’s pushed to work harder, even being awarded (barely acknowledged by his father) a first at uni. Tyrone Huntley convincingly embodies these dilemmas, with a restrained, rather despondent edge, offset by his concerned ‘rock’ of a sister ChiChi (the likeable Aretha Ayeh).

Elsewhere, while the strained gay son-father relationship is no surprise, it’s refreshing to see the stereotype of the gay man being close to his mother turned on its head: “You have a super power to get under my skin,” says an angry Alex at a key point.

But it’s not too dark: the humour is often laugh-out-loud, from some light Jamie Oliver bashing to hilarious gags about the gay-icon status of both David Beckham and 50 Cent.

So what didn’t work so well? The elongated eve of the wedding meltdown could have been clipped a little, and at times, as a fan of Bloc Party, I felt initially disappointed by the songs, what Kele describes as “West African High Life music mixed with electronic dance music that I hear in clubs today”. Yes, there are hooks, and a sense of energy – but their subtlety means it’s unlikely you’ll be humming an anthem on your way home.

However, a second (and third) listen to the soundtrack album on Spotify confirms that – as hoped for – the tracks are real growers: standouts include the catchy Sea Between Us, the mournfully descending riffs in Shame and the outstanding More Than You Know, which builds up to a real climax.

So how will Leave To Remain stand in the current pantheon of gay pop star-penned musicals, what with Dan Gillespie Sells’ Jamie cleaning up in the West End? It, of course, remains to be seen; but watching this made me realise that Pet Shop Boys need to revive their still-underrated Closer To Heaven. The time, surely, is now for LGBTQ stories in all their impressive diversity.

Grab a copy of our latest print issue for a rundown of hot LGBTQ films to look out for this year.