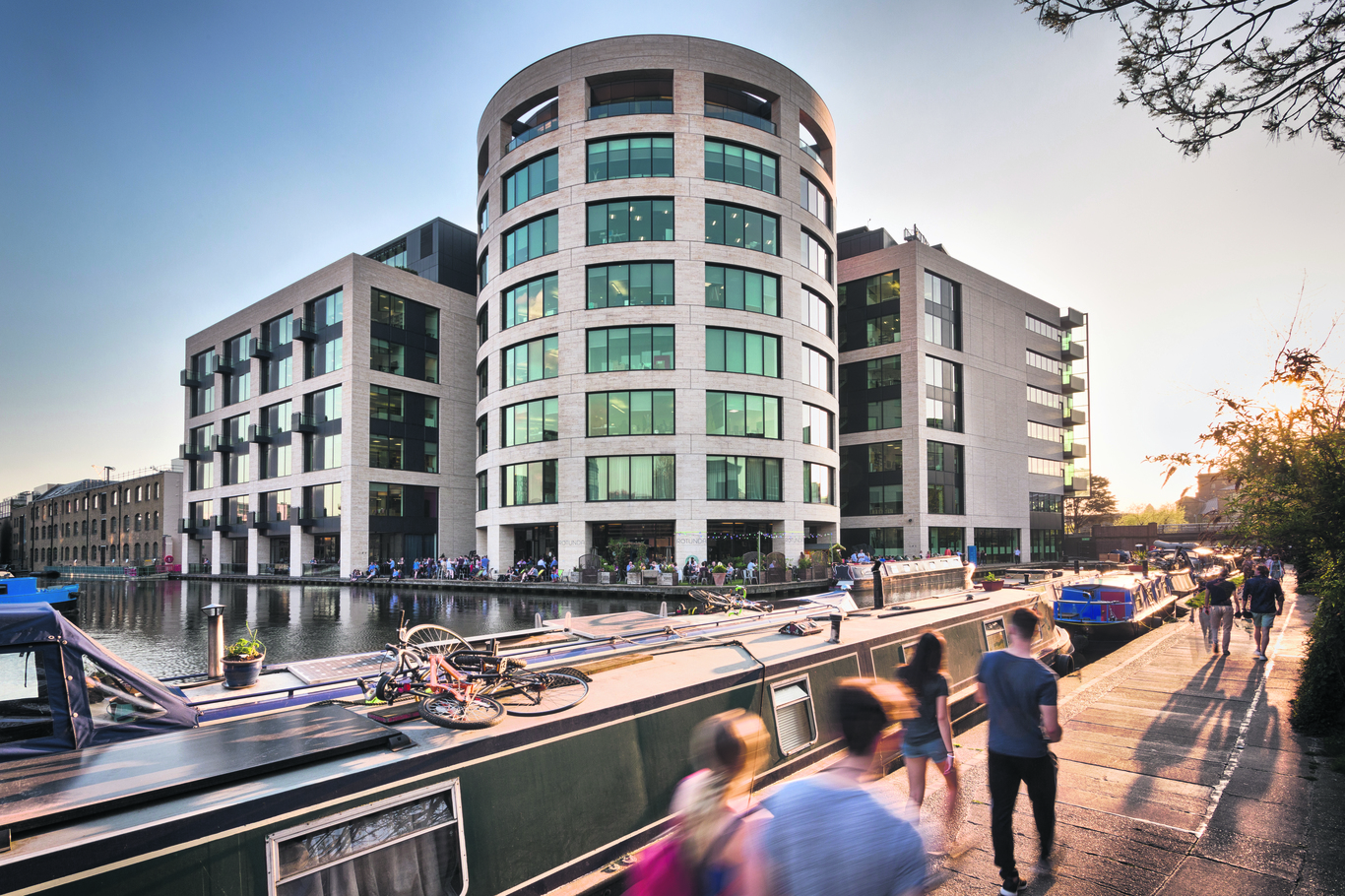 [vc_row][vc_column][vc_column_text]Building the first new concert hall in London since the Barbican (over a quarter of a century before) was ambitious. Combining it with seven stories of eco-friendly office space, a sculpture gallery and a waterside restaurant, all in the less-than-salubrious King’s Cross of the early noughties – even more so. And then the recession hit too. Yet despite this fearsome stack of challenges, Kings Place enters its second decade this month as a thriving hub.

Such rare fortune only happens with a passionate visionary pedaling away hard behind the wheel, dedicating their very life to it. In this case, it was entrepreneur and music lover Peter Millican. “The first three years were really difficult,” he admits. “I bought the site when it wasn’t even certain the trains from Paris were going to come to St Pancras, and long before Argent began the transformation of Goods Yard.”
[/vc_column_text][vc_row_inner][vc_column_inner css=”.vc_custom_1537356130784{background-color: #e5e5e5 !important;}”][vc_column_text]

Before & After: Kings Place rises up

Slide the image back and forward to see the transformation

[/vc_column_text][gambit_before_after before_image_id=”7247″ after_image_id=”7244″ angle=”0″ before_caption_color=”#ffffff” after_caption_color=”#ffffff”][vc_separator][/vc_column_inner][/vc_row_inner][/vc_column][vc_column][vc_separator color=”white”][vc_column_text]His goal, for a highbrow concert programme to be supported by income from business conferences and large office rentals, required people to venture to an area then synonymous with prostitution, drugs and crumbling post-industrial wastelands. It’s testament to the strength of Peter’s ground-breaking concept that Kings Place still, somehow, managed to pull it off. What on earth was he thinking?

[quote cite=”Peter Millican”]I always felt you should build near a transport hub, build densely, and make the most possible use of a site[/quote]

“Big private buildings had been taking over ever-larger parts of our cities, depriving citizens of access to areas they previously had,” he says. “It was simply wrong. I wanted to create somewhere offering public space within a commercial environment. When we did it, there were very few city buildings like that, but I do believe it has brought about change. There are far more projects now where the planners insist on having public access.”

As we talk in the building’s main atrium, students nestle into sofas with laptops, parent’s push buggies about and there’s a gentle thrum of voices somewhere down below.

aving previously worked on smaller developments in the north of England, Peter was keen to try a big project in London, and always had his heart set making a meaningful impact in chronically neglected King’s Cross. “I always felt you should build near a transport hub, build densely, and make the most possible use of a site,” he says. “I spent a couple of years wandering around the area, but on a trip to the Canal Museum one day I saw these horrible lowrise post office buildings over the water, with a brick wall against the canal. It was such a ridiculous use of this site that I chased it for two years.”[/vc_column_text][vc_row_inner][vc_column_inner css=”.vc_custom_1537356281166{background-color: #e5e5e5 !important;}”][vc_column_text]

Before & After: the site on the canal bank

[/vc_column_text][gambit_before_after before_image_id=”7243″ after_image_id=”7241″ angle=”0″][/vc_column_inner][/vc_row_inner][/vc_column][vc_column][/vc_column][/vc_row][vc_row][vc_column][vc_separator][vc_column_text]He then secured well-chosen partners before a brick was laid, including bringing the Guardian and Observer as key high-profile tenants for the office space, and forming a partnership with hospitality supremo John Nugent for the vital catering and conferencing elements. John had worked with the same architects on restaurant projects at the Royal Opera House and the National Portrait Gallery and they hit it off.

“People thought we were mad,” agrees John. “The early adopters of the offices and the events were the tech companies, as the city firms simply didn’t want to risk venturing out this way.” That reticence all seems like an age away looking out at today’s gleaming, desirable neighbourhood, but much has changed in a decade.

“It took a really long time to stimulate the market here,” continues John, “but now we’re bringing five thousand people into the area on a busy week, and the hotels, restaurants and other things that have sprung up nearby get huge benefit from that. We also do lots of community outreach, running homework clubs and special concerts for local schools that always do really well.”

Peter and John’s Green & Fortune restaurant group are celebrating a decade of Kings Place with a total refurb of the café and Rotunda restaurant. As with the building, the restaurant has a deeply personal touch – all the meat served comes from Peter’s home, a farm in Northumberland, before being aged on the premises.

He’s also still fully involved in the concert programming, where the relative youth of the venue has allowed them to venture beyond the original classical remit to take risks. New concepts, like the recent Podcast Festival have become unexpected annual events, while their Politics Festival now pulls in global heavyweight speakers too.

“We’ve never gone for Arts Council money for the concert venue,” Peter reveals. “If you compare us to the sort of funding the Southbank or Barbican get, it’s gratifying that people now talk about us in the same breath. It was risky, but now in this age of austerity it actually means were more secure, because nobody can pull the rug from beneath us.”

The Rotunda restaurant has just soft-launched after a complete refurbishment, and is currently offering 50% off your food bill (until Sept 23th). More info and booking.
Find out about the full Kings Place events programme here.
[/vc_column_text][/vc_column][/vc_row]