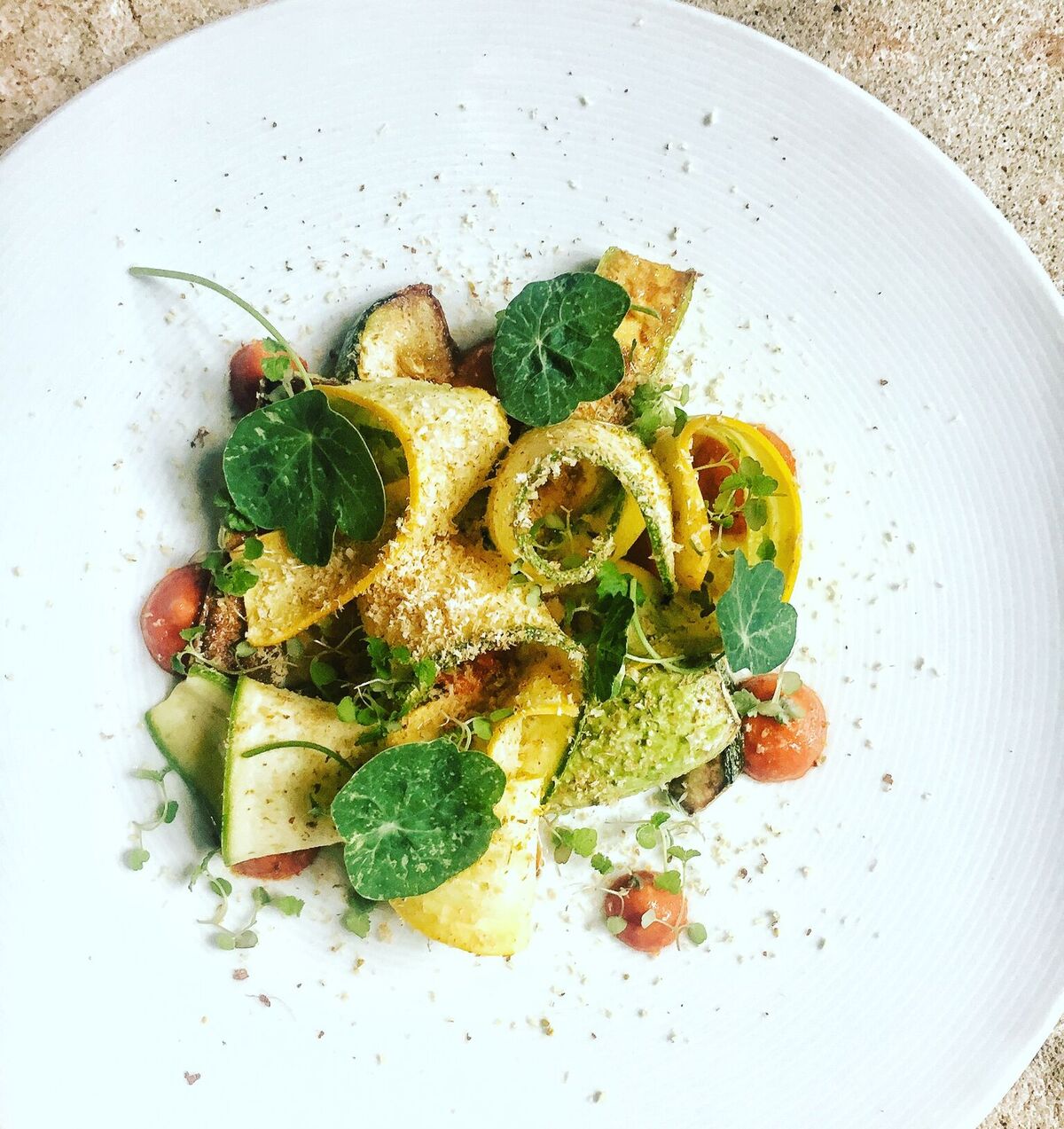 What’s the new vegan menu like at The Gilbert Scott?

I’ve been lucky enough to eat at the most glamorous dining room in King’s Cross on several occasions over the years.

Fish and meat dishes aside – disclaimer: I’m not vegan – I’ve always enjoyed the general experience: the sommelier who’s knowledgeable but not patronizing, the light knockabout wit of the waiters. It shows a confidence that seeps from the kitchen and beyond.

And that gorgeous room! It’s all down to one Gilbert Scott, the lucky bugger who won the competition to design the Midland Grand Hotel, which opened in 1873 at the new St Pancras terminus. The eponymous restaurant was the station’s coffee house, the high-ceilinged space classical in the grand European tradition: oil paintings of stormy seas, banquettes, gleaming limestone pillars, penguin waiters.

The longstanding Marcus Wareing-devised menu could be called heritage British. So what’s it like to eat vegan in such a temple of trad? Well, surprisingly tasty, actually.

Exec chef Chantelle Nicholson, who has worked under Wareing for years, has created half a dozen vegan dishes, as well as a Christmas menu. A New Zealander, she says she was taught about “the seasons and the ecosystem of the garden” from a young age.

We were curious, and pop in to try the offer. There isn’t much choice, but don’t let that put you off. Our two starters impress, both in their simplicity and punch of flavour.

Nutbourne Nursery in West Sussex has been growing speciality insecticide free vine tomatoes for nearly forty years, and a colourful plate of these – green, yellow and red chopped in various shapes and sizes – is an unexpected joy on a gloomy November evening, basil oil and olives adding sweet and umami notes respectively.

Meanwhile, a special of pickled cucumber, chargrilled gem and sweetcorn becomes thrilling with its crown of toasted hazelnuts. What to conclude? That no part of these would have been improved with the addition of meat or fish. Moist slices of vegan sesame bread are on hand to mop up juices and oils.

It’s hard to fault the mains, either. My only initial concern is portion sizing – these dishes are far from the zeitgeist of vegan streetfood, in all its filling, witty, wonderful glory.

But the plates turn out to be balanced and have more body than they initially appear to: smoked aubergine tortelloni are melt-on-the-tongue parcels with gentle bite from crispy kale, the mildly pungent hit of turmeric in creamy coconut adding needed calories and fat.

Better still is a warm courgette salad, its multi-textural greens and yellows given weight by a generous slick of romesco – the Spanish sauce made of toasted almonds and red pepper – with a sprinkling of smoked almonds to finish. A side of broccoli comes with a smooth, salty dip made from chickpeas and capers.

Desserts stumble, however. While pineapple with coconut, mango and lemongrass has the right blend of balance, acidity, sweetness and indulgence, late-season strawberries with cicely – without the billed shortbread, presumably because of its butter quotient – are unremarkable.

Still, it’s the only false step in a meal that left us omnivores feeling content, peaceful even: in fact, whenever I eat vegan food now, the sense that the chefs are enjoying the challenge of using basic ingredients is tangible.

The wines help: a sommerlier-advised Mosel-Riesling is a match for our starters, a Mornington Peninsula pinot for the mains. All in all, we positively drift back home along the twinkling canal.

Read more about eating a plant-based diet in our new print issue out now.