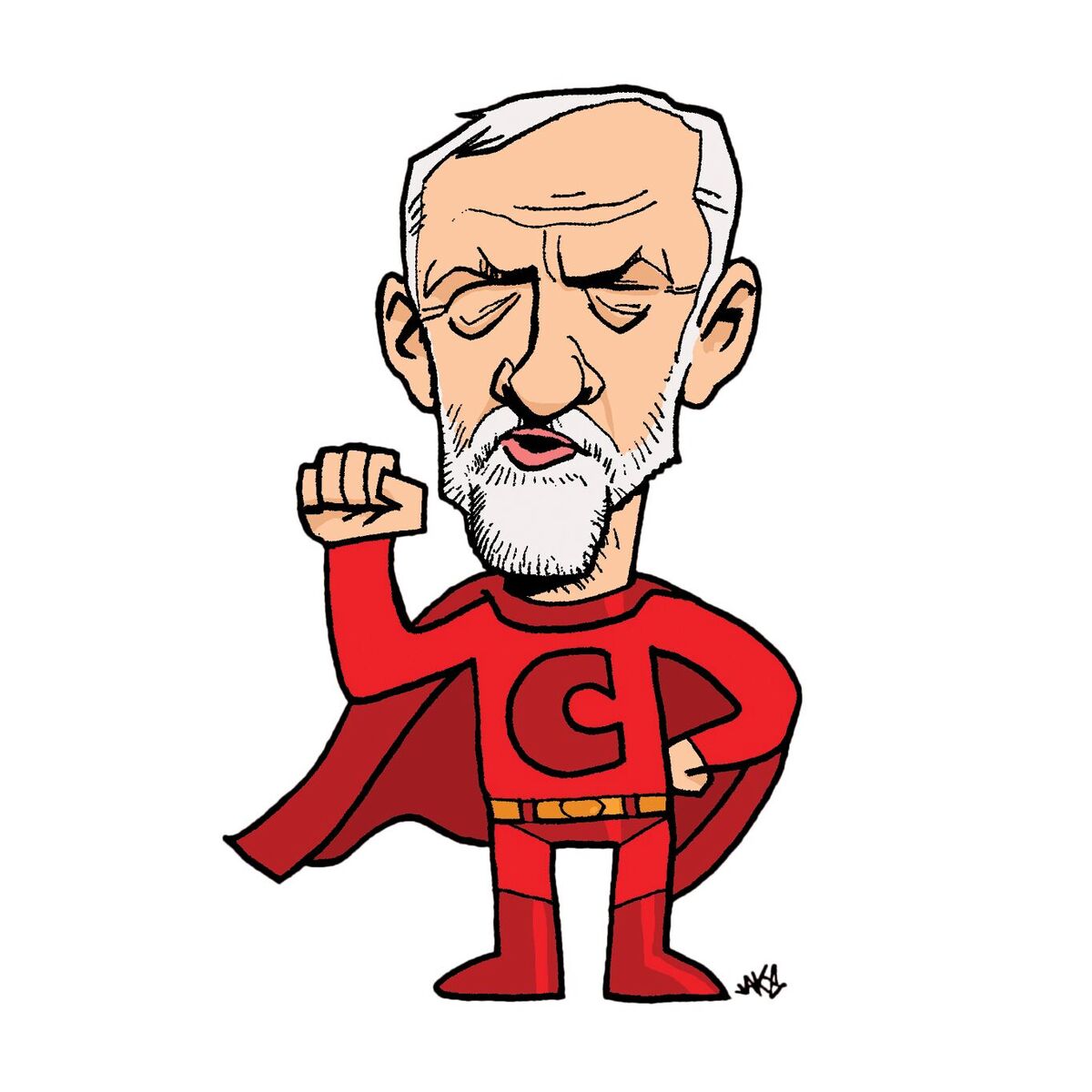 Is it a bird, is it a plane…no it’s Jeremy Corbyn

Every September, Thought Bubble Festival, one of the UK’s most prestigious comic conventions, is held in Leeds. Teeming with graphic artists, comic creators and publishers, all armed with their extraordinary creations, this year saw the unveiling of a very special spandex-wearing, caped crusader. Is it Batman? Superwoman? No, it’s Jeremy Corbyn.

With fist clenched and lips poised, ready to say something about the many’s superiority over the few, he triumphantly stands on the front cover of a new comic book anthology about the man, the politician, the pacifist, the gunner, the gardener, the socialist, the cyclist he has always been – and the legend he has, since June this year, swiftly become.

The folks behind what they have dubbed a ‘strong and staple-bound comic published in the national interest,’ are Self Made Hero, an acclaimed independent publishers based in Pancras Road. Not long after the election, the team decided to create a book on Corbyn, sending out an open call-for-submissions online asking artists to make a piece on the subject of the Labour leader.

After four weeks, the publishers had 100 submissions from novices and renowned artists – think Hannah Berry and Steve Bell – alike. They swiftly narrowed this down to 34, pieced everything together and late last month started selling – for a humble fiver – a compilation of pieces about the jam-making Islingtonite.

We nabbed a few minutes with Self Made Hero’s Sam Humphrey, hoping to find out a little more about the book celebrating the quirks and qualities of good ol’ uncle Jez.

Tell us a little more about the publishing house. It all started ten years ago when Emma Hayley, our managing director, decided to do manga adaptations of Shakespeare classics. Pairing the original text with manga images really captured the market and the book remains one of our best sellers.

From here she moved on to publishing adaptations of Kafka’s Trail and The Master and Margarita, amongst others. Emma didn’t have a big budget and couldn’t afford to get the bigger artists involved at the time. A lot of the work was carried out by up-and-coming artists, so we really started from the grassroots.

When did you decide to create a Corbyn book? The initial idea came when he first became leader back in September 2015, when we wanted to do one on Corbynomics. We were keen but we really didn’t know whether he would last more than a few months. It became pretty clear to almost everyone that he wasn’t succeeding in getting people interested and expanding the electorate so we put it on the backburner.

When did this change? It wasn’t until the election this year when we realised he had done just that. The book was back on but we knew we had to do it quickly; waves of popularity in politics never last that long. In early July the idea was bubbling over for about a week then literally the day before we sent out the call-for-submission we decided that we should do it. It was all really last minute but we knew it would travel far enough to get the submissions we needed. We gave people four weeks to do a comic of up to four pages long.

What were the submissions like? We got well over a hundred and the vast majority were pretty good. A lot of them were from people within the grassroots comic scene – we were already aware of them and their work – but many submissions came from newcomers.

So for example Joe Henson, a 14-year old, submitted a one-page-piece, The Many Faces of Jezza. Emma sent the email saying that we wanted to include him but he never checks them because he’s so young, he never gets emails. While on holiday with his mum, who read the Guardian article about the comic, she said, “you better check, just in case,” to which he said “I don’t have a chance.” They checked a week later and Emma’s email was sitting in his inbox a day before we went to print. They replied in the nick of time.

Also, within a couple of days, Emma had emailed people like Martin Rowson and Steve Bell and got stuff from them. It all happened really quickly because it had to really – but we are happy with the end result.

How did you narrow it down to the chosen few? When we sent out the initial call for submissions I was worried that we hadn’t been specific enough. What if we got sent loads of negative or saccharine stuff, rather than the light-hearted comics-on-a-theme we wanted?

Thankfully, the vast majority of pieces were about allotments, jam and Arsenal, most were funny and not overly political – people seemed to really get the spirit of it. Granted, I have read some funny comments accusing us of creating a cult of personality and all this other stuff, but clearly some people just didn’t get it.

Do you have a favourite piece? I really like Jeremy Corbyn and the Redistribution of Wealth, a tragedy by Richard Worth and Jordan Collver depicting the absolute devastation in Corbyn’s face when he tells a homeless person that he has no change and is horrified to find some money hiding in his pocket when he gets home.

Would you do one about any other politicians? Safe to say, I don’t think there is going to be a Jacob Rees-Mogg one. Corbyn is a very specific figure. Current wave of popularity aside, he always had these little quirks – be that jam making or his Arsenal fandom – that make him human.

With Corbyn the focus can be placed on him as a light-hearted figure with funny traits. I can’t really think of anyone else who would really fit, but someone might come along and that might change. If we did an open call for a May book, I don’t think the negativity would quite work.

Has he seen it? It is likely. The unofficial account, Jeremy for PM, have shared it and they have a huge following, as has Momentum. We had a stall at the Labour Party Conference, we got it in the hands of a good few shadow frontbenchers including Diane Abbott but we can’t officially confirm that Jeremy has had a flick through.

The Corbyn Comic Book is published by Self Made Hero, £4.99, available here.