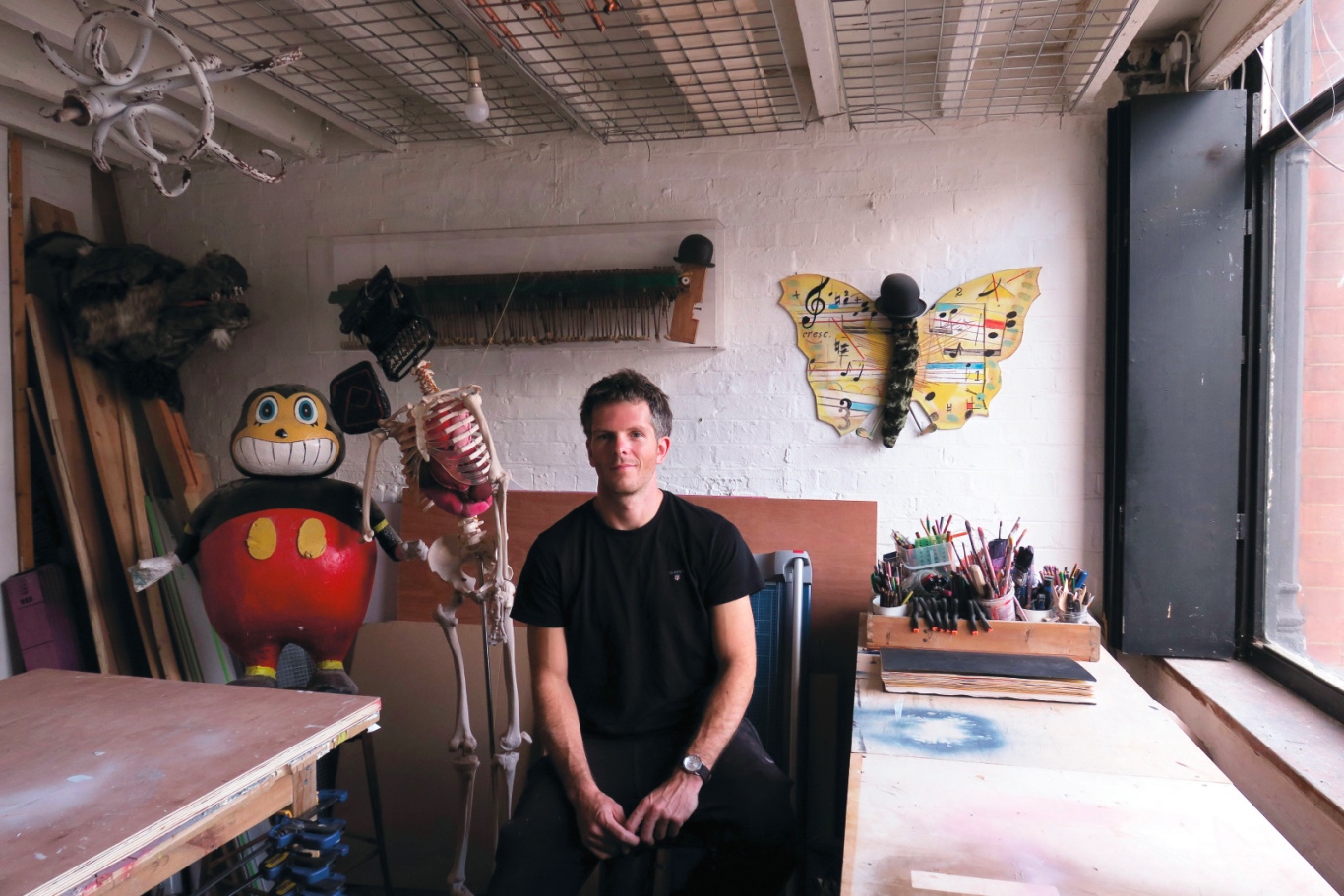 Meet the artist under the arches in King’s X

And that's not all this King's Cross creative bloke has been up to. Read on

The arches behind St. Pancras station currently house a surprising number of creative characters. A tailor who has been weaving away for over 20 years sits alongside a person who hand-makes glasses, while graphic novel designers nestle up against skateboard makers. And an antiques emporium takes up residency next to Richard Graham’s workshop.

“This is a cool strip,” says Richard when we popped over to the arches to find out more. “I feel lucky to be here. It’s such an interesting contrast in this area: you have Google and all the big corporates over the road and then all these little independent people churning away over here.”

Richard, who has been based here for three years, is a commercial sculptor. He currently has a giant blue snake coiled around a selection of watches for a window display in Selfridges and has just completed a replica of the Berlin Wall for a launch party for the film, Atomic Blonde.

These projects aside, his main interest lies in creating characters from everyday objects. As we make our way up the spiral staircase in Richard’s studio, past dystopian recreations of Mickey Mouse, swarms of bees made out of pencils, and a skeleton with a typewriter for a skull, Richard reassures us that his studio is remarkably organised at the moment.

“I’m trying to become a minimalist these days, only keeping my best pieces,” he says. “I used to be such a hoarder and I had bits of junk everywhere; all over my studio, in my kitchen, my living room. It wasn’t healthy.”

After completing a degree in History of Art, he started making sculptures out of objects. Finding it difficult to exhibit or sell them and reluctant to throw them away, Richard, who studied a masters in creative writing, started writing stories about them. Children’s books seemed like a natural way of combining his sculptures with short tales. “I used to just take photos of my work and add it to words but the images were too harsh,” he says, “I have hundreds of rejection letters from book publishers sitting at home.”

One of the most striking fixtures in his workshop is a caterpillar made from the insides of a piano, fashioning a top hat. This is the first character Richard decided to draw and it is now the subject of his first published kids’ book, The Cranky Caterpillar.

Richard plucks a book from the stack on his desk and talks us through the vibrant drawings, which include reinterpretations of Picasso’s Three Musicians, clear influences from Duchamp throughout and an exploding page in the style of Kandinsky. He wanted to pay homage to some of his favourite artists, and writing children’s books has allowed him to amalgamate his interest in art history and creative writing.

“The book is about empathy, friendship and colour syntheses; it endorses the relationship between colour, sound and emotion,” he says. “There’s a definite knack to writing children’s books: they are quite formulaic and more difficult that you might think.”

Raymond Briggs, the man behind The Snowman, has applauded The Cranky Caterpillar, calling it “an astounding piece of work” – and suggesting that Richard, despite his modesty, has got the equation right.

Aside from his arts background, Richard also found inspiration for the book, which is primarily set in the insides of a piano, from the pianists of St. Pancras, to whom it is dedicated. “It is just really nice walking past and seeing people playing the pianos at all hours of the day,” he says, “I thought it would be cool to shout them out in the book.”

The Cranky Caterpillar (Thames & Hudson) is available here at £10.95.