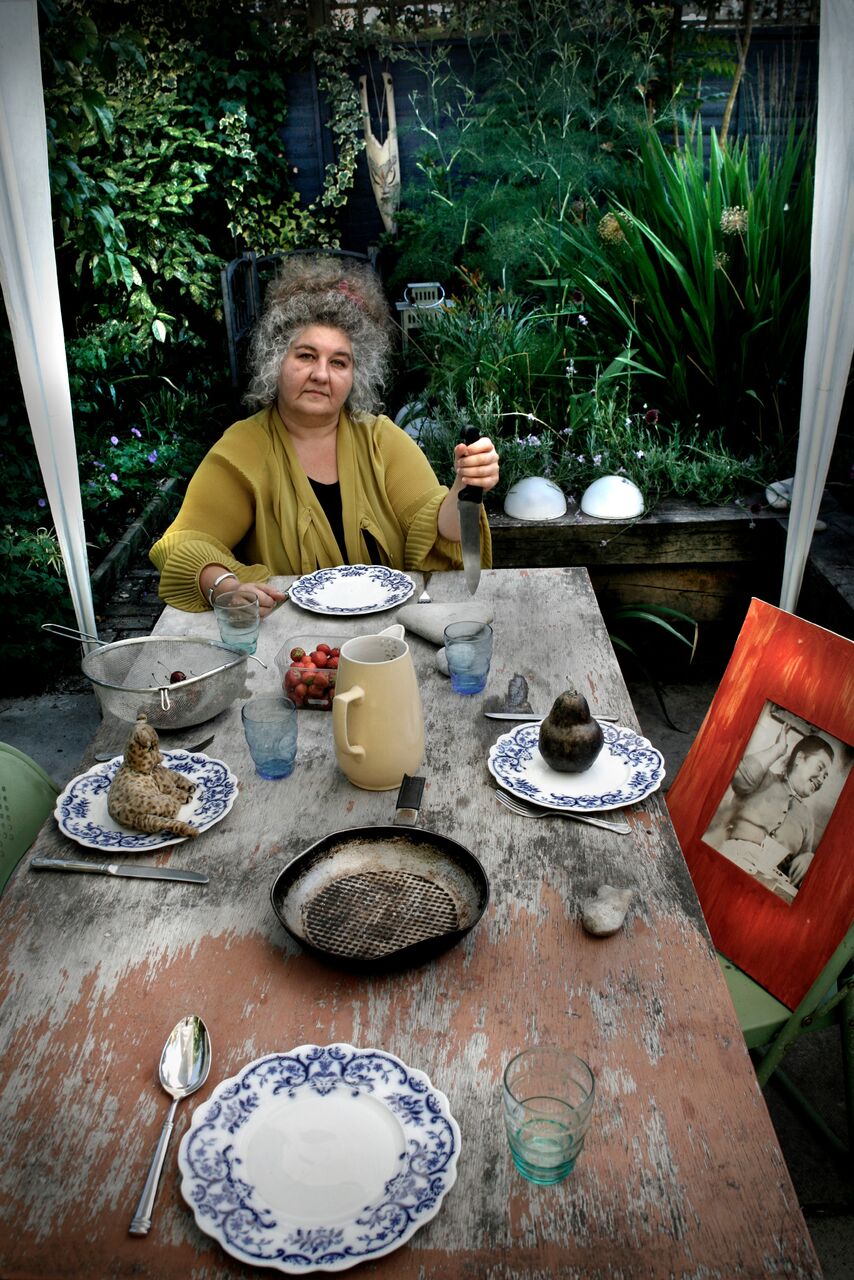 The front cover of a unique new book depicts a full scale portrait of a middle-aged woman clutching a butcher’s knife that she’s calmly piercing into a decrepit wooden table. Situated in a lush green garden, the table has been set for a dinner party of four, the other two guests, um, a piece of fruit and and a toy cheetah.

The woman’s life story, as summed up in a three-page monologue, consists of her selling her family’s violin in order to buy a one-way ticket to Paris where she trained as an opera singer. Soon after, she moved to Baghdad with a bunch of all-laughing, all-singing, all-crying Slavs, to then return to the UK where she fell head-over-heels in love with Charles, an English lord who also happened to be gay and a heroin addict.

Her story sits alongside an annotated recipe for a simple black truffle salad and a guide to the essential cooking kit, should you find yourself fighting for survival in the forest.

This tale is one of 31 stories, beautifully laid out next to 52 handwritten recipes, accompanied by powerful page-sized photos. The cookbook has been “lovingly prepared” by Elia Romanelli, Piero Vereni and Ottavia Castellina, and it offers an opportunity to delve into the private and culinary lives of some of the capital’s more extraordinary characters.

The book is encased with two foldout maps – on the front page, dotting their subjects around the world from Cape Town to Lancaster, on the back, indicating their location in London, from Chingford to Lewisham.

How did you come up with the concept?
There are three of us behind it. Myself (Elia) and Piero are cultural anthropologists who primarily focused on the biography side, while Ottavia is a photographer who specialises in artistic portraits. It seemed natural to combine our perspectives and reveal a handful of individual’s life stories.

Using recipes seemed obvious for us because food is so central to human interactions. We are social animals and food is the most common and efficient tool for connecting people. Preparing food for others is the ultimate nurturing act; what better way to gain an insight into people’s lives than by learning about the food they prepare for those they love?

Besides that, we also wanted to take something of a political stance. It was important for us to have a stab at the culinary industry and the idea that cooking works in a top-down structure and that us “common people” aren’t as able to make and understand food. Everyone knows how to cook, it isn’t difficult, you can go and ask anybody and almost everyone has got a recipe for you. This book is an attempt to re-ground cooking.

Do you have a favourite tale in the book?
Piero has a special relationship with some stories. In particular, the one of a man who grew up in Monserrat, travelled the world with the navy and hasn’t fully immersed himself in the sea since he witnessed a botched attempt at harpooning a whale. This is teamed with his recipe for rice pilau.

Also the story entitled ‘Cut the dog’s head off’, the tale of an eccentric artist who sees art as his addiction; he creates as regularly as he eats. His recipe, written in multi-coloured felt tips and spray paint is for an eponymous Finn Stone Stew.

This being said, we find it hard to rank our interviewees. They’re all individuals to us, each as important as the other. I found it interesting seeing how well I got on with some people and how the chemistry was never right with others: it’s funny how some people you get to know in a second, while others are still strangers after you’ve talked for hours.

You, Piero and Ottavia are all from Italy. Why did London inspire you to create this book?
It was the idea of food as an international concept, a symbol of human relationships rather than cultures, regions or groups. We wanted to include as much diversity as possible, and highlight the universality of food through this.

This city does not exist as a place; it is just a space where the whole planet set a global date with itself. There was no town better suited to carry out our project.

Will you make another one in London or elsewhere?
We all have our own interests and links to London, and maybe we have already done what we wanted to do together. We are all Italian but we thought it only appropriate to publish the book in English. We didn’t want to translate Slices of Life. We could recreate the book in another city, Paris, Venice, you name it, but it would be a new book with brand new stories.

How did you find your interview subjects?
We picked people randomly. Some we stopped on the street and asked if they wanted to participate. Others we met by chance, some were friends of friends. We just wanted to talk to ordinary people with no professional cooking background. Well, with one exception: the woman on the front cover was a cook in Tuscany for a period of her life.

What did you learn during this project?
That all people are extraordinary; all you need to do is give the time to meet them. You must be open to being surprised, be it by a man from the other side of the world or the lady from next door. Every life story is interesting and unique, even the ones that seem banal or common. Even the most boring one is exceptional because it is the only one that managed to be quite that boring.

How long did it take you to complete?
From the conception of the original project to the publication of the book, it took more than two years. This period included four months of fieldwork in London, taking photos of people with their most loved possessions, deciding between the interviews and narrowing it down to 31.

We then had to transcribe and edit everything, combine the photos, text and recipes as well as find the right publisher. Every step was time consuming because we wanted the whole project to be really “lovingly prepared” for our readers.