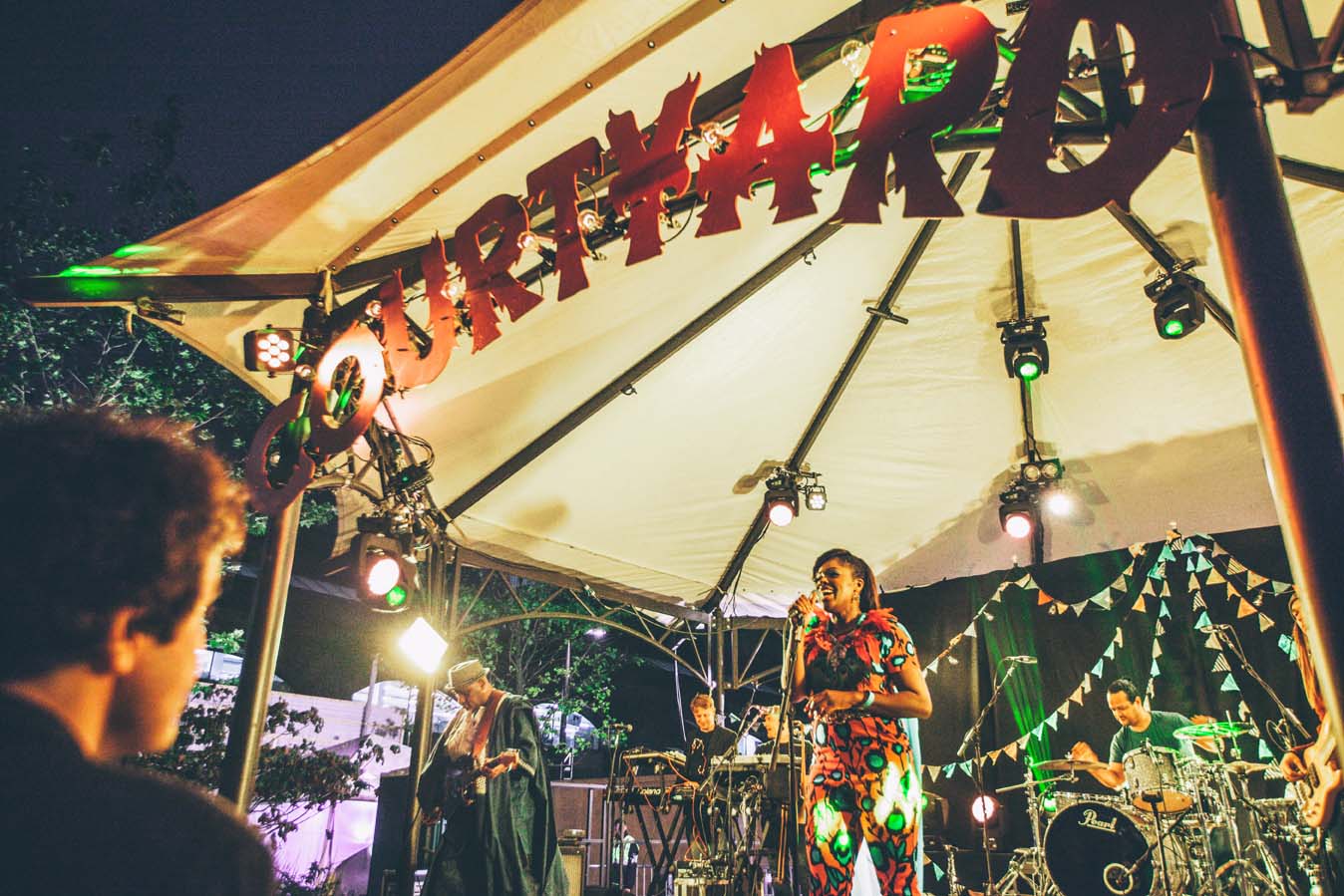 Everything you need to know about Courtyard Festival

We meet Fiona Stewart, the brains behind five-days of live music, DJs and craft booze in the centre of King's Cross

Fiona Stewart is a life-long Camden resident, festival boss and devoted mum with a colourful history. In her early years, she was a homeless punk with a baby son moving between local squats. She eventually carved out a name for herself as promoter of the Green Man festival in Wales, which celebrates its 15th anniversary this year. Her Welsh beer bash, Courtyard, returns to Lewis Cubitt Square in King’s Cross across the May bank holiday weekend.

What was life like here when you were growing up?
Camden attracted a lot of music promoters, designers and artists. It was a rundown area and renting space was cheap, so it was full of small independent shops and market stalls. It didn’t take a lot of money to promote a gig, club night or to make and sell stuff. Not all of it was brilliant but it was prolific, and sometimes you discovered something amazing.

You also became a single parent then. Did you feel supported by the community?
I lived in squats in Castle Street and Frederick Street. I never slept on the street but there were quite a few nights where I’d stay up for hours waiting for friends to let me in. I lived like that for a few years and also while pregnant. My community was my friends and I felt very supported by them. You see some grim things when you live like that, but I was lucky because I experienced real kindness and support.

What did you do to make ends meet?
I worked with mates at their events, shops and stalls. It was hard, but I learned loads, had a lot of fun and made lifelong friends. I worked at the Music Machine (now Koko’s), Electric Ballroom and Dingwalls, putting on club nights and helping out with bands, and also at the Black Cap as a dresser to some of the drag artists, which actually meant being a glorified maid. I spent a lot of time running errands, putting talcum powder on clothes for the quick changes, and sometimes got to help design shows. The pub was run by an Irish family who also ran the Red Cap (now BrewDog) around the corner. They would babysit Ben while the show was on.

What is your idea of a good night out locally now?
Being with people I care about. We are lucky here to have loads of great venues and it is difficult to pick one over another, but I enjoy going to the Assembly Rooms for more intimate gigs. Small music venues develop talented emerging artists and add greatly to the community vibe, and with so many closing it’s good to celebrate the remaining ones. I’ve always loved the Roundhouse, and Jane Beese – who took over the booking a couple of years ago – has brought in great talent. But the place I go the most now is Spiritland on Stable Street: Paul Noble has created a unique concept, the music line-up is incredible and the sound quality is off-the-grid.

Tell us a bit about the return of Courtyard.
We’ll have a huge barn along the west side of Cubitt Square serving 200 Welsh ales, beers, ciders, lagers and ales, and a gin cocktail bar. There’s a music stage with bands, DJs and a twmpath (Welsh country dancing) each day. It will be the same genre hopping international music line-up that we have at Green Man. Look out for Pinegrove, an endearing country-rock band, Sweden’s greatest ever export and Dungenjoin, Dutch Uncles representing the leftfield, Bill Ryder-Jones from The Coral and Huw Stephens are DJing, plus loads more. Einstein’s Garden (the Green Man science area) and the Little Folk children’s entertainment area from our festival will be there, and a sculpture of the Green Man will stand tall in Granary Square to oversee the festivities, as he does in Wales.

Creating community-focused opportunities such as this is very much at the heart of Green Man. Is this due to your early experience?
I don’t really know, but I could not have improved my life without being given opportunities and I don’t just mean financial. There is a great deal of human equity in just having people interested in you, or introducing you to new things. But it’s also exciting and fun to create that for other people too, and the biggest kick I get out of the events we run is to see people enjoy them. That’s something shared by all of us here.

What else makes this event special?
Green Man is underwriting the risk for all the brewers so they can take part. Beer festivals charge a pitch fee and often a percentage too, and many of these brewers could not afford to do that, as they are small producers or enthusiasts. That’s sad for them and tragic for the people who never taste their brews. Bringing so many small producers together in King’s Cross creates an opportunity for them to develop business. Making beer isn’t just a job for them, it’s a passion, and that creates something unique and wonderful.