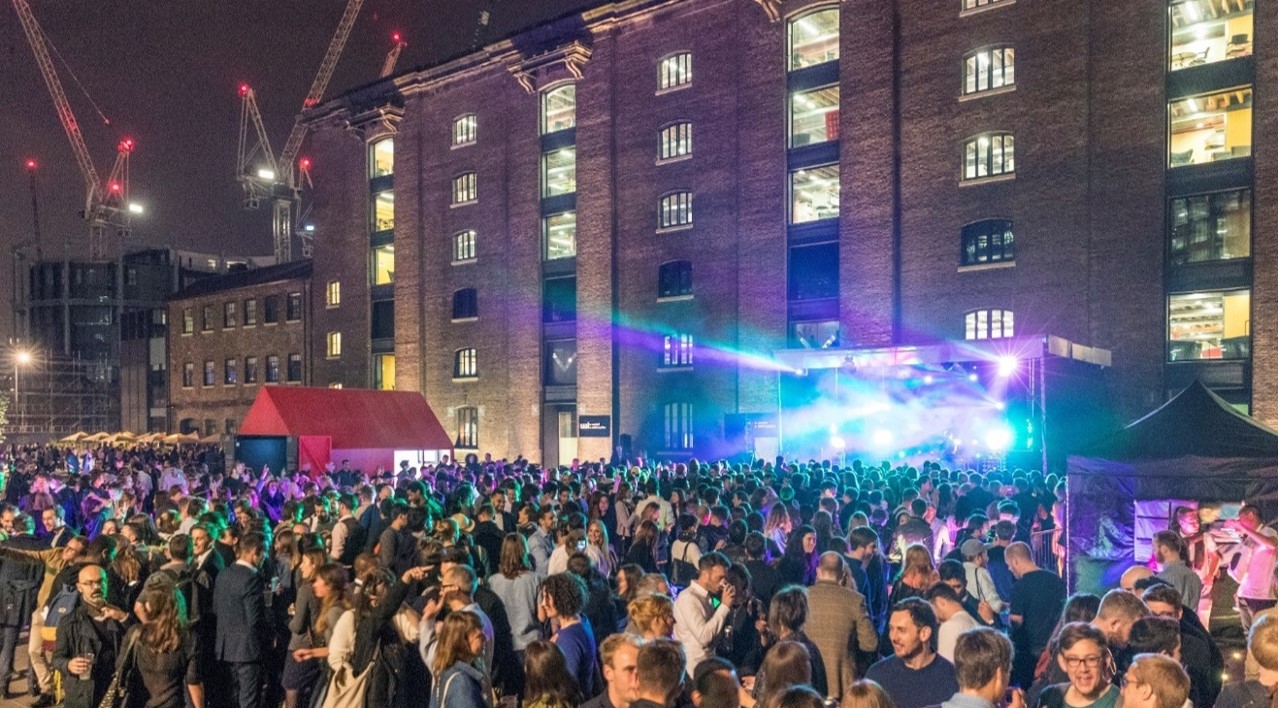 From the Lumiere Festival to the Lighterman, here's a dozen reasons why this corner of London rocked

Back in the darkest days of mid-dryanuary, this vibrant four-day extravaganza showcased the illuminating work of 20 artists, including the ambitious Circus of Light, a vast animation across the breadth of the Granary Building commissioned from Portuguese studio Ocubo, which drew gasps from the crowd. Also impressive was Diver by Ron Haselden, a 17-metre light sculpture at the King’s Cross Pond Club. In short, it was heart-warming to see tens of thousands of revellers descend on Granary Square in one of the coldest stretches of the winter.

This year the design and culture show announced its relocation to N1C. Its epicentre is now Granary Square, where eight Monopoly-style houses were filled with conceptual installations and creative projects, co-opted by big name brands from across different design disciplines. Meanwhile Cubitt House, a two-floor pavilion in adjoining Lewis Cubitt Square, boasted dozens of lighting and furniture stalls, while the Canopy near Waitrose morphed into a pop-up retail space selling fashion accessories to technology, textiles and stationery. And on the balmy launch night thousands in attendance were pounding the slabs to a rousing DJ set from Hot Chip’s Alexis Taylor. Result.

3. Word on the Water survived

The charming floating bookshop finally received a permanent mooring license a few paces from Granary Square, allowing it to become the floating literary and artistic hub that its owners have always envisaged. “Books, music and art are what make us human,” says Jonathan Privett. “This barge wants to provide space for all three.” Inside, the chilled playlist creates a relaxed hang-out area for readers and an area that caters to families. On the roof, there’s a stage which plays host to live music sessions, poetry slams, spoken word events and book launches. “We hope this old boat will become an important reminder of the simple pleasures in life,” he says, “and the slower pace that can still be found in a city like London.” Read our interview with John here. Follow @wordonthewater

2016’s big KX restaurant opening, the Lighterman, is so-called after the Victorian workers who operated ‘lighters’, or flat-bottomed goods barges, on the canals. This unique three-storey building is unmissable in itself, from the canalside lower terraces, to the ground floor directly onto Granary Square and upstairs restaurant with wraparound terrace. Dishes include everything from well-sourced meats and seafood from the wood-fired grill to classic British cooking: recommended is the tender octopus, marinated and slow-cooked for three hours with olive oil, salt, thyme and lemon. The vast windows mean views over the canal, the fountains and the relentlessly changing local skyline. Read our full review here. 3 Granary Square N1C

Locals have spent the last five years watching it rise up between the gothic splendour of St Pancras Station and the red brick brutalism of the British Library. Open last month, the £650m purpose-built facility for biomedical research is a stunning piece of architecture, the curvaceous modernism of its sweeping roof cleverly managing to complement both of the famous buildings nearby, despite now looming high and bulkily above them. Step in from the Conrad Shawcross digital sculpture Paradigm to a rolling programme of public exhibitions and events, supporting the premise that art, architecture and science are colliding here in a brand new way. ‘How do we look?’ Open Wed-Sat until 4th Feb. Free. Read our full piece here.

Ahead of its permanent three-screen local arrival in 2017, the upmarket cinema group ushered in a bespoke-designed, 32-seater picturehouse. Located on the corner near Lewis Cubitt Square, it shows three films a day, with comfy seating and cocktail bar. Read our story here. Handyside Street, London N1C

The UK’s first ever man-made fresh water public bathing pond captured the imaginations of Londoners in an unexpectedly big way. What some people forgot when faced with its closure this autumn was that it was actually a temporary “installation” with the rather grown-up title Of Soil and Water, encouraging visitors to enter the water and participate as a “piece of experiential art” – rather than a pool that would be around forever. The adjoining sauna opened throughout winter, squeezing in a cosy eight people at a time. After being used by nearly 50,000 swimmers, the whole Pond site is becoming part of the verdant Lewis Cubitt’s Park.

The last two months of 2016 have seen the emergence of a regular monthly market in the covered West Handyside space. As you’d expect, some of the best artisans and street food talent in the capital are all hawking their wares, including British cured meats from The Charcuterie Board, raw milk from Hook & Son, slow-grown chickens from Fosse Meadow Farm, and bread from the excellently-named Dusty Knuckle (an award-winning social enterprise that works with young people facing barriers to financial independence). But it’s not just food: there are also pieces by Made in Arts London’s artists and designers, and vinyl on sale courtesy of the Independent label Market. Free, every last weekend of the month (resumes again in Feb 17). Read our story here.

This year the local (albeit temporary) performing arts scene alongside King’s Boulevard has really exploded. Alas, it’s soon coming to the end with the construction of new Google offices – but there’s still time to catch the three productions: the long-running Railway Children, which features a real-life locomotive (ends 8th January); the Shakespeare Trilogy at the Donmar, which features the plays The Tempest, Henry IV and Julius Caesar in a 420-seater theatre (until 17th December); and the David Bowie musical Lazarus, which runs till 22nd January and features Hollywood star Michael C. Hall. More info here.

10. Futuro House remains on a rooftop

Painstakingly restored by the artist Craig Barnes, this spaceship-style, prefabricated dwelling is perched on the roof of UAL in Granary Square right through until summer 2017. Designed by Finnish architect Mati Suoronnen in the 1960s, it’s one of only about sixty in existence today. Originally conceived as a weekend retreat, before being manufactured around the world, the oil crisis of the early 1970s put an end to that, causing the cost of plastic to treble. The upshot was that only a hundred were actually ever made. Now resident in King’s Cross, it hosts performances, screenings, talks and happenings speculating on the possibilities. Open to the public on the first Wednesday of the month. Until Summer 2017. Read our full story and more info here.

11. Elton John did a surprise gig at St Pancras

A cold afternoon in early February: not really when you might expect to witness superstar Elton John bashing the ivories on the concourse over at St Pancras International. But this was the surprise for the legions of phone-wielding commuters; and perfectly timed, in fact, for the release of his new album Wonderful Crazy Night. To be fair, the ageless icon did actually donate the old joanna itself – a Yamaha B3 – to St Pancras, famed for its clutch of very popular and freely playable pianos. He even signed it. Worth checking out then, if you’re fan, or you pass daily through the uber-glam destination station. Watch the video here.

Kentish Town’s hugely popular gelateria made its water-facing debut this summer, right on the corner of the Old Midland Goods Shed beside Waitrose. In addition to the attractive sharing table, created from a large piece of wood from the bottom of the Panama Canal, there’s a outdoor summer seating area facing the herb-scented waterfront picnic lawn. On the ice cream front expect anything from Aperol spritz sorbet to lavender, damson and even rosemary chocolate flavours. An elderflower and prosecco is on the chalkboard most days, while stilton and cranberry flies out at Christmas: “It’s a real talking point for families, especially if they don’t see each other much throughout the year,” says owner Julie Fisher. Read our interview with Julie here. 3 Wharf Rd N1C

Maple and Kings
The Goodge Street healthy eating and juice bar comes to the heart of King’s Cross in January.

Kimchee
Korean BBQ is the staple at Kimchee, with an open-plan kitchen serving delicious meat and fish dishes.

Coal Drop Yard
The first stores and openings are due in late autumn for yet another canalside development.