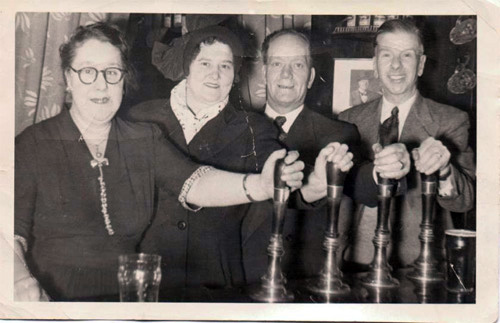 The Scottish Stores on Caledonian Road has a fascinating story. We hear how one man has recorded his family's long association with it

We were fascinated to discover the website itsjustthewaythingswere.com, which contains memories from great grandmother Daisy Louisa Hunt on King’s Cross, growing up in the City of London, surviving the blitz, dodgy pubs and eventually moving to Slough.

“You don’t really think about listening to older people’s memories till it’s too late,” says her grandson Warren Carter, who has spent hours recording and transcribing her stories for the project. “Luckily for me, I realised that my Nan had a treasure trove to tell. But then everybody has a story and anyone who lived in London through the Second World War certainly has – so at the age of 88 (she’s 92 now) and with an incredible memory for detail, I started to interview her.”

Listening to his Nan’s stories made Warren realise that, despite its size, London was like a village where families lived together, neighbours married each other, kids played out in the streets and anything you needed to buy was no more than a couple of minutes walk away.

“But I don’t want the past to be all rose-tinted either,” he says. “Some days London had smog so bad you couldn’t see in front of your face. Infant mortality was high. There were gangs and looters who robbed people’s houses and shops when they had been bombed. One consequence of World War II was to bomb those communities apart as street after street was pulled down. Many, like my Nan, eventually left London and she ended up on the Langley estate in Slough. The town is always the butt of jokes and ‘come friendly bombs’, but has always been a place where wave after wave of migrants go looking for work; and that’s still going on today.”

“Aunt Bet was my mum’s older sister and Uncle Alf was a carpenter. One day he went down the local and was chatting to the landlord, who said, why don’t you apply for a pub? So he gave up the carpentry and took over the Scottish Stores on the Caledonian Road in 1940. He lived above it, four bedrooms and a big living room, no garden, only a balcony at the back of the pub.

Aunt Bet always said the pub was a finishing school. Prostitutes; gangs; soldiers; gays. There were a few locals but it wasn’t the sort of pub where local could sit and drink properly, most people were passing through. It wasn’t a comfortable place really, with the fights and the prostitutes. The prostitutes were lovely girls, they really was. It was a well-known prostitute area. The soldiers would come off the trains.

I was in there one night when I was courting and two of the girls were shouting across to one another and all of a sudden glasses started coming over. Aunt Bet sorted them out and chucked them out. Another night we had our soldiers in and the Yanks fighting. ‘Cos the Yanks started up about bloody limeys and all like that, ‘Look at me I’m lovely’ and they’d throw the money on the counter and tell you to keep the change. Another night we had a fight between the Yanks and the Canadians and Uncle Alf got on to the Snowdrops, they called them round King’s Cross Station, and they come round with a jeep and just chucked them in the jeep and that was it. There was no sort of ‘come on your nicked.’ Snowdrops were the military police that wore a white helmet.

We used to have a couple of gangs that came in there, the Deaf Boys and the Angel Boys, who used to beat the Americans up just because they were American. The Angels gang were rough, like you’ve got your hooligans now. They were army dodgers. They made out they had a bad back or something. A lot of them paid the doctor to pass them off as invalids. I don’t know how true this story was, but one of them was driving a private hire taxi. One woman in the West End was as pissed as a coot and as she got out the car, he pulled her fur back off her and she was too drunk to notice. They’d shoplift, there was a massive black market on beer and cigarettes and all like that.

It was a good pub, but it was rough pub. We used to take Geoff and your [Warren’s] mum up there. Geoff was about a year old and we went up there, Christmas time and they had a big parcel. There was a board and easel for your mum, a Meccano set for Geoff. The prostitutes had clubbed together and bought that. They were decent girls. Most of the girls come from up north, they come down to London and got caught in that trade. One of them had two beautiful boys, she showed me a photo, and they had little bow ties. They were with her mother.

The police did raid now and again. My Uncle Alf knew Bill Lewis who was in at Judge Street police station, and he would tell my uncle there’s gonna be a raid. Uncle Alf would tell everyone to ‘keep it down will yer.’ He couldn’t tell them but they knew what that meant. CID would come round and they’d clear the pub.

The gays kept it very quiet. Uncle Alf’s barman Arthur was gay, but it was two years before Uncle Alf knew.

Uncle Alf and Aunt Bet got another pub near to where we used to live, the Royal Oak in Galway Street. That was more of a neighbour’s pub. They went to school with some of the residents there. They were there not quite a year and he got cancer in the stomach and they had to give that up and that was it. He died three years later.

Aunt Bet never remarried. She’d give you anything. As with so much of this part of London, the area was pulled down and Aunt Bet moved to a seven story block of flats in St. John Street, Islington where she lived ‘till she died aged about 87 years.

Intrigued? The Scottish Stores is at 2-4 Caledonian Road, open daily till at least 11pm. Read more chapters from the book at itsjustthewaythingswere.com