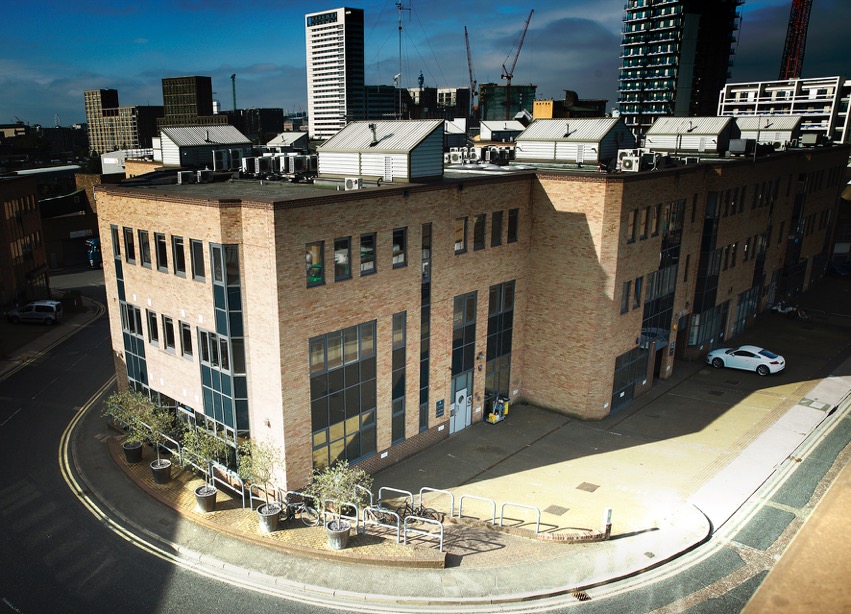 The rise of Tileyard Studios


Nick Keynes is all smiles when we sit down in his office, currently in the midst of an on-trend glassy refurb. Tileyard Music artist Sigala, better known around here as Bruce, is at the top of the singles chart with his devastatingly effective, Michael Jackson-infused debut, ‘Easy Love’. It’s the latest success story from a whirlwind five years here in the backstreets off dusty old York Way.

In the 90s, Nick was in the boy band Ultra but they had subsequently been dropped, and by 2010 was looking for a new challenge. He started by utilising some empty space owned by serial property investor Paul Kempe, a man with a keen eye for snapping up sites in interesting parts of London.

Despite the King’s Cross regeneration taking shape just to the south, the rundown complex of units Paul owned up on Tileyard Road remained a determinedly post-industrial hinterland.

This neighbourhood was formerly heavy with the smells and effluent from piggeries (for slaughter and sale at nearby Caledonian Market) and belching kilns that cast tiles, bricks and chimney pots for rampant Victorian-era house-building. That grimy industrial era might have gone, but the fortunes of the place hadn’t really changed that much.

However, with many of west London’s traditional music studios closing (the digital revolution the latest unstoppable economic force changing very fabric of the city), it kinda made sense for Nick and business partner Michael to move across town.

“Previously we had built some studios in Acton,” he tell us, “but couldn’t afford to have the whole thing to ourselves, so we rented three of the rooms out to subsidise our own studios. It never set out to become a commercial venture, but getting rent every month was the catalyst for an idea. The tenants had all become our musical collaborators and good friends too, so was it scalable? And could it really work in King’s Cross?”

In fact KX, with its high speed rail links, revamped stations and the fact most creatives moved east at least a decade before was much more convenient for making music than the trekking to Acton or even Westbourne Park. So Nick’s fledgling idea duly started to take off.

He spent months calling around everyone he knew to come and take a look. The first tentative phase of 10 studios were all custom-made to each artist’s particular needs, and that’s a model that continues to this day; nothing is ever built speculatively.

“Nine of those first 10 guys are still here five years later,” beams Nick. “That includes Basement Jaxx. Getting them to take a studio in phase one was a result, so we thought we could probably build a couple more. We’re up to 72 now, including The Prodigy, Chase & Status and Mark Ronson.”

But despite success attracting the A-list producers, the real turning point for the project came when they began to bring in associated industry people too.

“We thought, it’s all very well us creating a lot of great music here, be we need an outlet for that music. We need managers, publishers, lawyers.” says Nick. “The first two key clients were JHO Management and Sound Advice. The industry is going through huge change, but the major labels are still very powerful, so what if we could create our very own ecosystem here, where people could thrive, support each other, and all share greater success as a result?”

Outside, horizontal rains lash the bleak yard below as we hear that no business has left Tileyard having failed. On the contrary, the ones that have gone to date have only been because they got so big they moved to the somewhat sunnier climes of LA.

“We’ve had three of those,” says the boss, including Zane Lowe, who recently decamped to Cali to head up the Apple radio project Beats 1. A fairly compelling reason to vacate the premises, we’ll give him that.

A lot of the success of the hub is down to curation, and Nick has taken time placing each newcomer into a part of the site that can foster the best casual meetings and, in turn, those fruitful collaborations.

Meanwhile the flexible workspace has been attracting a wide spread of increasingly different people. There are tech start-ups (useful to artists in areas like distributing music or reaching fans), publishers (such as Notting Hill Music, who now throw very successful network bashes), associated fashion labels (including Liam Gallagher’s Pretty Green), and even dynamic food and drink brands like fast-growing Propercorn and Notes coffee, which has its roastery based in the buzzing on-site bar/restaurant Vinyl Café.

“We’re probably 60% music industry now,” admits Nick, “but 95% creative, so the widening of the community still really makes sense for everyone.”

The original complex is pretty much full, but owners City & Provincial have more buildings nearby, plus they’ve got their sights on other cities and countries too. And the expansion continues apace on home turf, with the launch of Tileyard Ventures, a programme providing support to promising start-ups, ahead of opening up further affordable co-working space.

They are also about to revive Amplifi Academy, the incubator programme for people serious about breaking into the music industry that was the forerunner of the whole studios project, this time under the Tileyard name.

“This industry is a minefield now,” admits Nick, “as we say, it’s not the record business anymore, it’s the fan business, so a proper ecosystem of support in navigating all that is more essential than ever.”

So from tentative first steps right through to stadium-filling megastardom, this place is providing the kind of real world support network that artistic types – often condemned to lonely hours in front of their laptops – genuinely need, throughout their careers.

“Making music is a time-intensive occupation,” says Nick, “and you are very quickly forgotten. That adds to the pressure to keep creating constantly, but ultimately the fan benefits. We’ve got a lot of DJ artists here who spend all day honing a tune, play it at a gig that night to gauge the crowd reaction, then come back to the studio the next day to tweak it. So rather than A&R men dictating the sound and hoping it works, you’ve got a direct engagement with the fans, which I think it brilliant model.”

As the musical landscape continues to shift like this, Tileyard seems to have stumbled – albeit rather deftly – onto a kind of magic formula required to help their community flourish in these uncharted waters.

And its success is infectious. Just as so many spokes of the industry machine have been gravitating to their hub in the last half-decade, next up, is the arrival of the majors.

Universal are arriving in the ‘hood in 2017, having just leased all ten floors of the still-under-construction 4 Pancras Square. That big move comes hot on the heels of the Performing Rights Society, already in residence directly opposite.

Could it be called the Tileyard effect? Quite possibly, but no matter, King’s Cross looks on track to be the natural centre of UK music very soon. Meanwhile, squirrelled away in darkened rooms on the rain-lashed industrial estate just up the road, new young producers and household names alike aren’t all that bothered which posh HQ pulls into town next. They’re just busy making tracks.

“I marvel at the ability of the guys here. They are inspiring,” says Nick. “This business always seems to be full of people who have made it with no talent, but I think there are actually far more people out there with that talent, and there’s so much consumption these days that people are really able to discern quality. The best thing is that when someone here has some success, we all share it. Instead of rivalry there’s a real team feeling.”

More info on Tileyard Studios, the Vinyl Cafe and the various facilities and programmes available, visit the website.