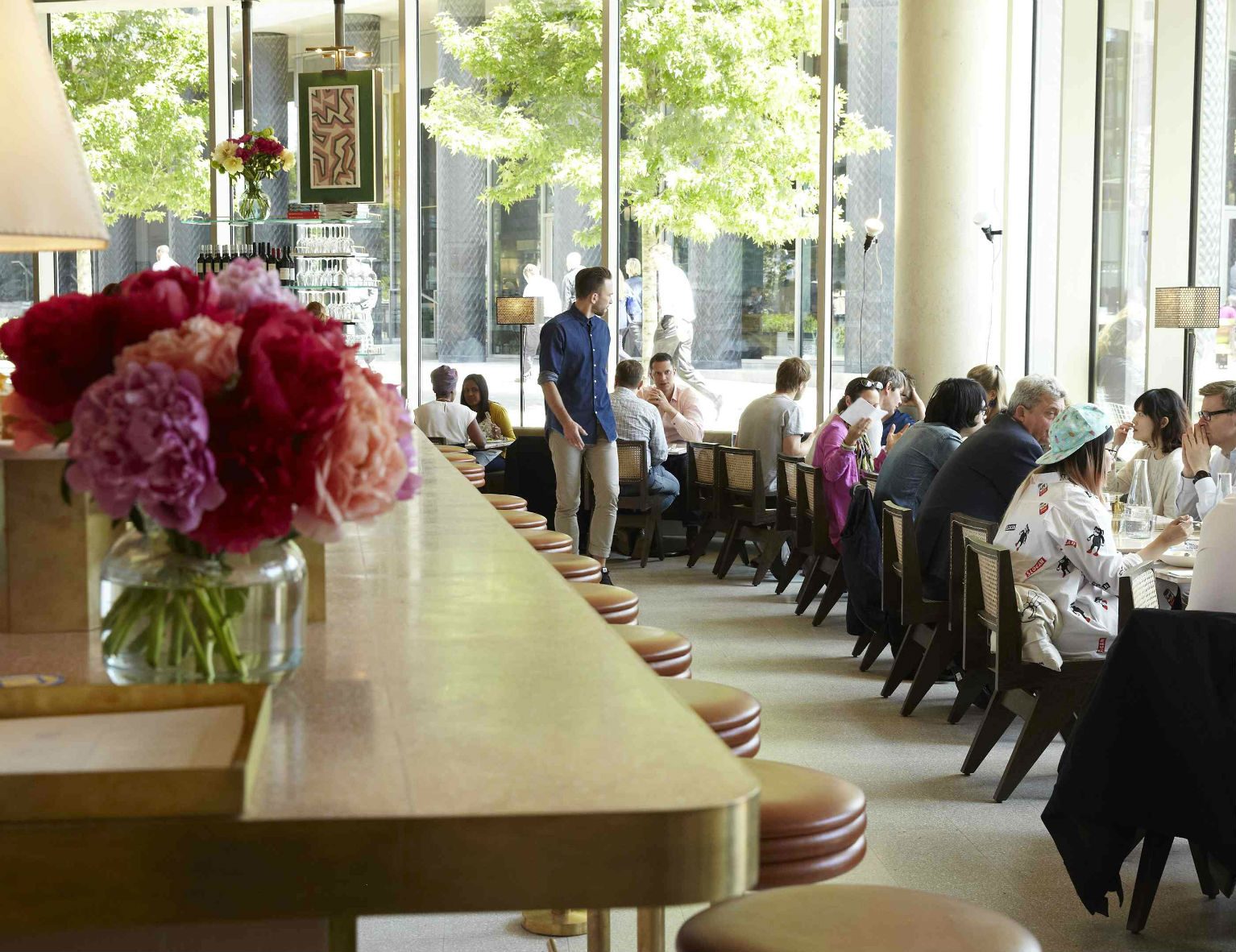 Lingering on this spanking new piazza, otherwise known as Pancras Square, provides an insight into what it will look like once the German Gymnasium building (being restored by the owners of Le Pont de la Tour) is finished next door. It’ll surely rival the more famous one over the Regent’s Canal, right? Then again, with Vinoteca opposite and upmarket cafe Notes also in situ, maybe it does already.

First surprise? The interior is surprisingly smart, with its riff on all things Italianate, from 70s table lamps to olive leather banquettes and pink marble tables, sexier (we imagine) in the evening than on a hot summer’s lunchtime.

On our visit, the restaurant had been open about a week, and service was endearingly enthusiastic. It was the day when a giant sponsored yellow waterslide lining King’s Boulevard was providing an appropriately lively backdrop of screams, pumping music and an ear-bashing PA system. “It’s great here, isn’t it?” beamed our waitress, as we took outside seats – and, yes, it was hard to disagree.

We were Granger & Co virgins, despite the chef’s subtle London expansion in the last three years; other branches are in Notting Hill and Clerkenwell. So, what’s the concept?

Well, the menu delights in healthy, simple produce: the kind of thing you might have eaten in Miami or Sydney. Which isn’t surprising, as their schtick is to “reflect the spirit we like to think of as Australian”. And Granger should know, having opened his first place at the prodigious age of 24.

Anyway, it’s the sort of joint to enjoy a pale pink rosé while perusing the small plates – many featuring ingredients like whipped avocado, tahini, broad beans or quinoa. A handful of mains include more standard steak, chicken and pork options.

An easygoing sharing starter of Korean chicken was a little underwhelming, alas, with less of a kick than we were anticipating. Still, iceberg, spring onion and sesame helped things along. And there was plenty to look at, with punters slipping and sliding down the inflatable on King’s Boulevard, and cheesy 90s dance tunes blasting out across the square.

Mains were lovely – and coincided with a much-needed break from the noisy racket opposite. A silken raw tuna and avocado poke exuded more tropical climes – it was only natural now to pretend we were in Hawaii – with samphire adding a taste of the sea, and brown rice and tomatoes balancing earthiness with a sweet tang.

Arguably better still was a shrimp burger, delightfully juicy in its sturdy brioche, with a spicy jalapeno mayo, the gentle hit of shaved radish – that most underrated salad ingredient – and hot, peppery sesame gochujang, a Korean condiment. At £15, however, its price had something of a “gulp factor”.

Our overall verdict? A reliable addition to N1C, perhaps without some of the thrill of Vinoteca, Caravan or Grain Store. Next time, we’ll be checking out the breakfast offer – which includes imaginative creations like sweetcorn fritters, eggs, harissa and kale.