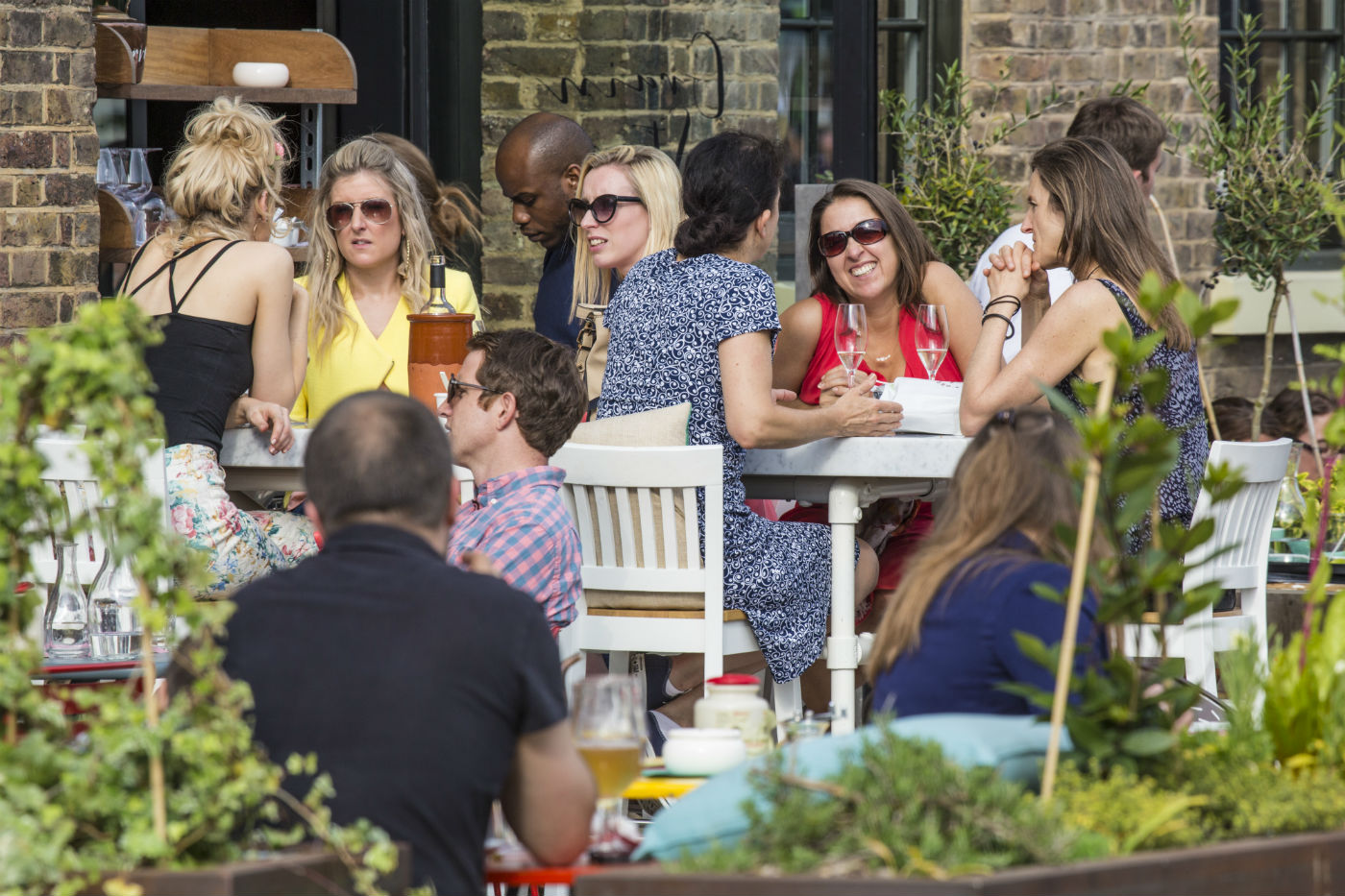 PLEASE NOTE: THERE IS A MORE RECENT UPDATE OF THIS FEATURE HERE (2020 UPDATE)

Surrounded on two sides, its waterfront terrace is a secret garden, and surely rates as one of the most atmospheric outdoor dining spots in the capital. Even if the sky’s grey it’s possible to sit at a table shielded from the elements by a wooden screen, leafy plants and herbs spilling out of wicker planters either side. And the food is very reliable modern British. As you eat, swans glide around Ice Wharf, oblivious, and the honk of geese in flight occasionally breaks the silence. 90 York Way N1

Boasting a highly useful all-year-round outside space, Camino’s Varnisher’s Yard setting in fact evokes a hip corner of Barcelona, with its bright red-painted barrels, olive trees, vast canopy and low clubby seating – and the buzz of international voices, whatever the day or season. It’s probably the most sheltered European-style square in the capital, too. The restaurant has its own west-facing dining terrace, too, perfect to sample some of north London’s finest tapas, or just a glass of Verdejo. Varnisher’s Yard, N1

This one requires no introduction, of course. It’s a rare – for that read rainy – day that sees its terrace entirely unoccupied. Come gloom or shine, queues snake out onto Granary Square waiting patiently for sharing plates ‘n’ spritz amongst its bustle of tables, not forgetting the smaller, dog-friendly area on the left. The good news is that service is fairly efficient, and any potential linger will probably be shorter than you might anticipate. Granary Square N1C

Caravan’s upmarket neighbour is a more relaxing experience to lounge outside over a pea tartlet, or some home-made ravioli – at least during the day. Flower and herb-filled planters, nurtured by the Global Generation (the team also behind the Skip Garden) surround the terrace, its vibe a little more ‘country garden’ than the stark minimalism next door. Granary Square N1C

Being on King’s Boulevard, it’s the nearest Ibizan-style terrace to both King’s Cross and St Pancras stations, and pleasingly loungey (especially the comfy lime-green padded low chairs on the higher terrace) to encourage lingering over the quite excellent wine list – 250 bottles and counting. If it’s warm, the scent of lavender, mint and other fragrant herbs fills the air, and waiter service makes a glass of Cour-cheverny or smooth 2010 David Ramonteau an easy acquisition. Accompany it with grilled Cornish squid, or sweet, earthy mackerel with pickled veg, sweet pine nuts, and salty capers. 1 Pancras Square N1C

You may already be a regular at this N1C opening, but did you know its petite terrace overlooks the quite lovely new Cubitt Square and park? There are fountains, the daily KERB streetfood market (see below), and overall a slightly more chilled vibe than destination-heavy Granary Square. The outdoor seats also make the perfect match for top Indian café food: try the Nalli Nihari, a speciality of this particular house: lamb cooked on the bone, served in a complex dark sauce. 5 Stable Street N1

One of the area’s earliest waterside bars, Canal 125 opened a decade ago in a tall mid-19th century building on Caledonian Road (if you’re walking along the canal east from King’s Cross, it’s the last place before the Islington Tunnel). The pub’s known for Sunday roasts, but there’s also a good daily menu serving things like pan-fried cod with pancetta and lentils or grilled tuna steak. But best of all, the raised terrace makes the most serene spot to dine over the canal; a genuine local secret. 125 Caledonian Road N1

Clamber up four floors to a walled candle-lit courtyard with great views of the London skyline – as long as it’s a clear night, stars are almost guaranteed. There’s diverse seating and cosy nooks for intimate chats: in fact, the decked and relaxed area is probably as close to a Euro capital city rooftop vibe as you’ll get in N1. Throughout the summer there are cocktail parties, a resident BBQ chef and club nights. Back on street level, gawp at the vertical garden by award-winning botanical designer Patrick Blanc, which spills over with 200 different plants. 2-4 Wharfdale Road N1

It’s not quite an idyllic alfresco spot – there’s a little too much building work going on for that – but nonetheless this is a prime location to sit and enjoy sunny delights: sardine, anchovy and caramelized little gem, say, or a casserole of artichokes and cuttlefish. The Hellenic wine list is an adventure too, the house red as light and promiscuous as a Pinot Noir. There’s also a craft beer range and white wines from the volcanic soils of Santorini. Arthouse, 1 York Way N1C

It’s an unexpectedly buzzy terrace at the northern tip of Chalton Street market, and one long discovered by the besuited after-work brigade. West-facing, it’s a real sun-trap, too, but if the rays are too much, try the secret garden behind the pub – covered also, for rainy days, or to gobble down the gastropub-style food. 60 Chalton Street, London NW1
This is box title

This sustainable urban garden – just relocated by at the top of Lewis Cubitt Park by the new Pond Club – is all wild flowers, vegetables and herbs, bee hives and chicken coops. Everything is built using recycled materials, with more than five hundred young people having been involved in its creation. You can sample delicious food, grown and prepared in the garden at the Skip Garden Kitchen; on rainy days take shelter in The Hide, a cosy Moroccan yurt with a wood burning stove. Lewis Cubitt Park N1C

It’s now five days a week: look out for the slightly clunky-sounding “inKERBator Mondays”, which trials London’s best new street food traders weekly throughout the summer. Less crazy (a good thing) now it’s moved to calmer Cubitt Square with its own fountains, foliage, there are more tables, chairs and parasols, plus an enviable grassy picnic area to the north. We love almost everything we’ve eaten, but particularly old faves like Bill or Beak, Club Mexicana and Oli Baba’s. Monday- Fridays only, N1C

She ain’t a beaut, but this terrace is still one of the only sunset spots in King’s Cross – at the moment. In daylight hours, it’s also a perfect sun trap, albeit not a very hi-lux one. We ate our very good Yeah! Burgers – a quality patty pop-up – balanced on a wobbly table as dusty passing trucks occasionally drowned out conversation, but it was still preferable to being confined to the shadows inside. 126 York Way N1

Sit outside at this all-day diner and enjoy the water feature flowing through the heart of Pancras Square, which adds perspective and tranquillity to the clang of constant building works. Or admire the gleaming glass and steel offices rising high above already mature shrubs and flowers, manicured lawns and saplings. And food isn’t an afterthought, either: expect everything from porridge to salads, quiches and sandwiches. Charcuterie and wine takes over in the evening. Unit 2, 1 St Pancras, N1C

Tucked away off York Way is this surprise find, ostensibly an on-site cafe servicing those who work in the smash hit Tileyard Studios (home to the likes of Mark Ronson). It’s also a buzzy spot to have lunch if you live or work nearby. Think huge multi-textural healthy salads for a fiver, or daily hot specials for £6, such as roast chicken with green beans, or chick pea curry. The terrace is packed and makes a good alternative option for a beer. Tileyard Road N7
This is box title

Big Chill House
One of King’s Cross’ most famous late-night venues boasts an all-weather terrace, temperate on even the most disappointingly dull summer’s evening. Loads of tables and chairs to quaff a cocktail, sample the BBQ and generally hang out till the early hours at weekends. 257-259 Pentonville Road, London N1

Bar Pepito and VOC
These two bars, along with Camino, make up the holy trinity of Varnishers Yard. At the former, try a sherry flight (£7.95) as you perch on a barrel, gazing at the rowdier Camino opposite; at the latter, an expert Martini on its AstroTurfed outdoor area. Varnisher’s Yard N1C

Sir John Betjeman
You might not even realize, but the pub’s outdoor terrace overlooking traffic-strewn Euston Road is vast and sheltered. Planters filled with rosemary add a whiff of the Med, too. St Pancras International NW1

Lucas Arms
A walled courtyard lined with colourful hanging baskets lies behind this rowdy Greene King boozer with its dozen tables and wicker chairs, all the better to guzzle wine from just £8.45 a bottle. 245a Gray’s Inn Road WC1

Great Northern Hotel
With Francophile patterned tablecloths on its tables, this buzzy dining and drinking terrace is not peaceful, but nonetheless offers a ringside view of taxis dispatching commuters, tourists and couples. Pancras Rd, N1C

06 St Chad’s Place
Half a dozen tables and chairs line the cobbled backstreet, a needed sense of calm at the centre of noisy Gray’s Inn and King’s Cross Roads – and backdrop to a decent modern European menu. 6 St Chad’s Place N1

The Fellow
The first of the area’s new wave of revamped pubs and spaces, its hidden-away terrace is an urban escape-hatch. Food and BBQs served outside. 24 York Way N1

Know a great outdoor dining or drinking terrace in or near King’s Cross? Share below