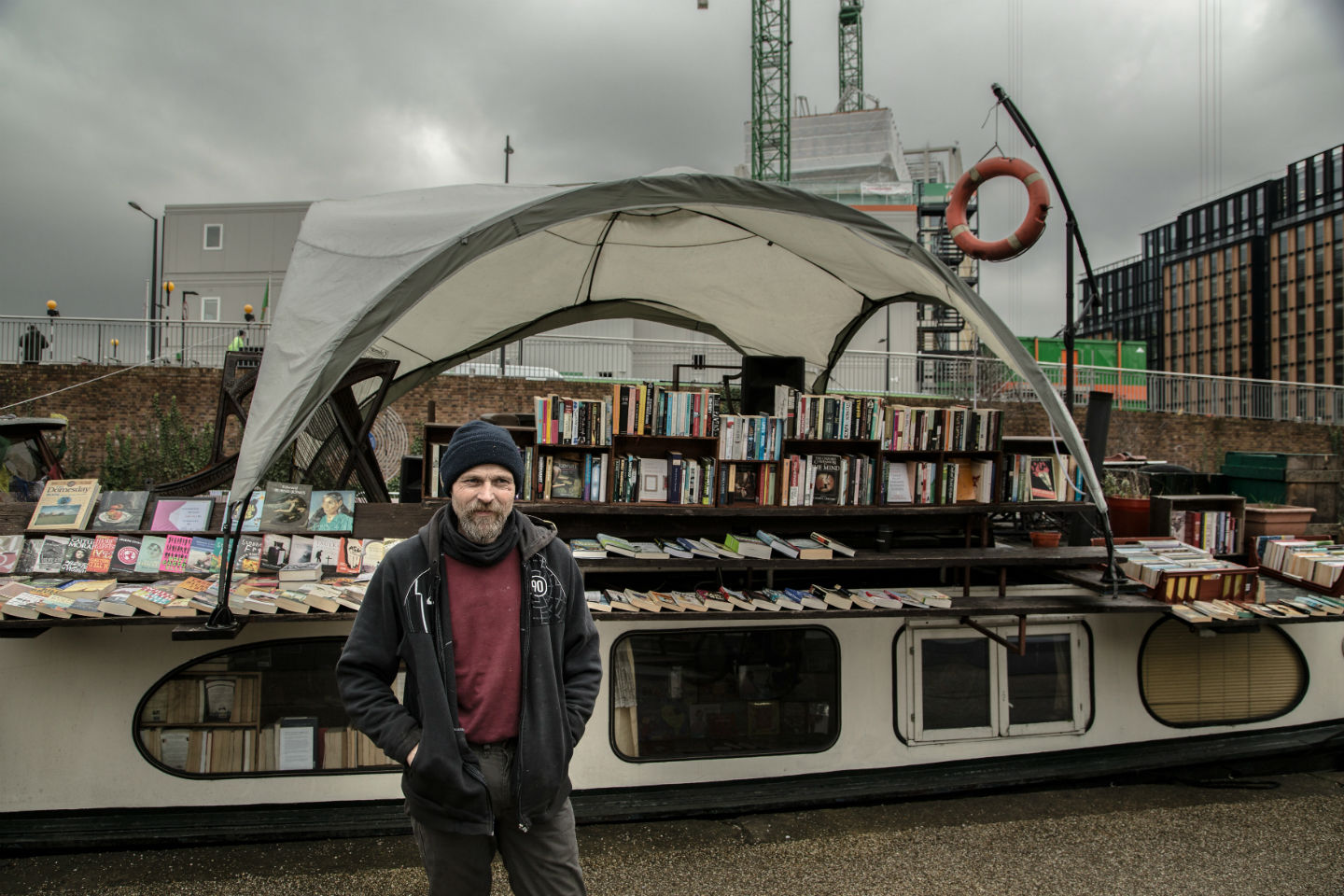 In this new weekly series we meet different folk who've made their home afloat. This week - the floating bookshop owner

When did you start living on the water?
Back in 2002, I was evicted from my squat in Hackney, which was auctioned and the buyer had to pay us to leave. I used my share on a boat; I was homeless if I didn’t. It was an old 1950s Norfolk Broads cruiser, half-sunk, which took a lot of looking after and then literally fell apart one night. It actually split in two.

So I bought an ex-police boat (by borrowing some money off my mum) that I kept for seven years, during which time I acquired this one. I planned the Word on the Water business with my friend Paddy: seeing this boat for sale, but not able to afford it, we asked the seller if we could rent it, showed him our business plan, and then he turned around and said he’d sell us the boat for a share. So we own a third each.

What’s your daily routine?
I live full time on it, so am always busy, especially as it’s a secondhand bookshop as well. In the winter, keeping it warm and cleaning up after the coal fire is very time-consuming.

What do you enjoy most?
So many things. I love the way it rocks at night, I like the community with other boaters, there’s a sort of romance to it as well. And I love being on a boat full of books: you can’t be bored. It’s also a great life for our dog, Star.

Where do you find your books to sell?
All over, although most come from the Cerebral Palsy charity shop on Fortess Road, Kentish Town.

Describe some of the communities on the water.
It’s shockingly expensive to live on a boat in London but still a fraction of what it costs to live in a house. You get wealthy people who own houses and boats, and people who want a boat so badly they’d do without a house to have one. And then there are those who just need somewhere to live. So it’s really diverse, but still friendlier than the same kind of diversity on land would be.

Is there animosity between continuous cruisers (who have to move every two weeks) and those with permanent moorings?
Full timers sometimes resent how much money they’re paying a month – a grand, maybe more, and the waiting list is long – when cruisers don’t bother. A boat on a mooring in London will sell for 100K more than it’s worth, just so someone can they pay the inflated rent on a mooring. Then there aren’t enough moorings, of course. And, if you get one, it sort of defeats the object: you have all the disadvantages of living in a flat combined with all the disadvantages of living on a boat.

What happened to the shop’s proposed permanent mooring in Paddington?
The British Land Corporation – which own Bluewater and Westfield – have taken the one we wanted: they’re the world’s largest property developers. So we’ve been here at King’s Cross since Xmas. We started out moving every couple of weeks, but it’s impractical to do it with a boat which is a hundred years old, and takes three people two days to get ready. The Canal & River Trust keep writing to ask us to leave, and we keep ignoring them. We’ve even given them a petition of 5000 names – and yet they still don’t acknowledge us.

So how do you like King’s Cross?
A fantastic place to live, like you’re actually in the very middle of the world. It’s so easy to find a nice place to get a takeaway, and so easy to get to or from here too. I remember when I used to come here and rave in Bagley’s – it’s changed so much now, and initially I expected not to like it, as I’ve got this anti-corporate aesthetic, but somehow there’s something very good about Granary Square particularly. I don’t know if it’s UAL or the House of Illustration, but they’ve made it arts and culture-based. Sure, it’s big and corporate, but it’s a human environment that has a lot to offer people; everything is being upcycled. It’s really innovative, with no expense spared – they even clean it with toothbrushes every night.

Since this interview took place, Word on the Water was finally forced to leave King’s Cross and is now moored downstream at Hackney Wick, opposite Bar 90 (a minute’s walk from the Overground station). Follow Jon on twitter @wordonthewater