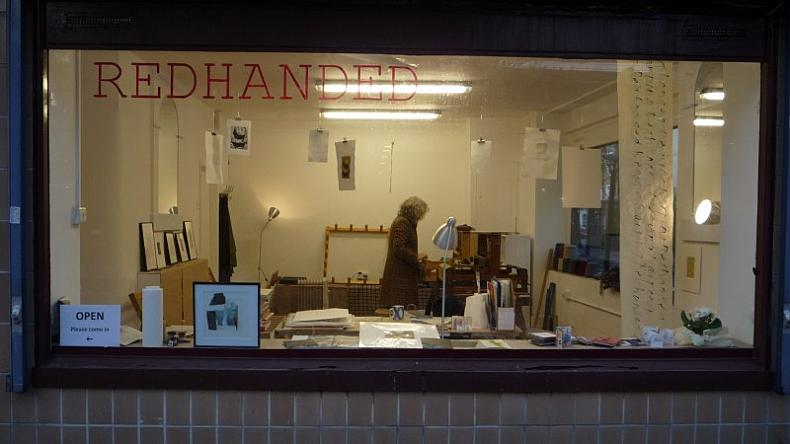 Some of you may be aware that Cromer Street has long been a shuttered row of shops. But did you know that one of the units, the former butcher’s, has this year become a hub of art and creativity? It all started when artists Sally Hampson and Esther Caplin moved into the shop in February and created Redhanded.

This week is a good time to check it all out as the gallery hosts its festive exhibitions with new artists and makers. And on Thursday (11th December) the resident artists have invited their neighbouring shops to stay open as well for a seasonal celebration: Russian and Gypsy guitar music will be performed by Youri Verevkine of Musica Nova, the Anglo-Russian Music Academy based in Cromer Street, while MEKO – Mila Harris-Mussi and Echo Godfrey – will be knitting in action. There’ll be international streetfood to tuck into too.

All year, the new temporary space has been attracting local residents, students, professionals, local school and artlovers. An ‘open door’ policy encourages passers-by to come in, talk to the artists and begin to take part in a busy programme of workshops, exhibitions and events. Hampson, a weaver, and Caplin, a mixed media artist, have set up looms, yarns and tools to create a space of activity – and calm.

So how did it all start? Caplin has been a resident in Cromer Street since 2000. Concerned about the number of long-term empty shops on the street, she asked the shop’s landlord Camden Council if she could use one as a studio. As members of SVA, a vibrant arts organisation in Stroud, Gloucestershire, the pair had seen how art activity in shop premises helped bring alive the high street. Camden included the space in their pop-up scheme, and the artists set to work.

In November sixty pupils from local Argyle Primary School took part in weaving workshops in the studio, and more than a hundred children and parents came to a special display of the work. All year the artists have received numerous expressions of support for what they are doing to help transform the street into a brighter and more exciting place.

The bad news? The current lease runs until the end of January 2015. And yet both Sally and Esther are committed to continuing their work. “We’ve seen what a difference a window onto creative activity makes to the street” says Sally, “and there is so much more we can do. So we’re asking Camden to help us stay on Cromer Street.”

Support them by popping by this week.