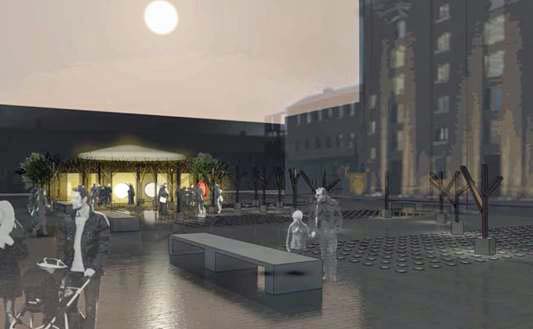 Memories of 2014’s unusually long, sweltering summer, which saw children still frolicking in the Granary Square fountains as late as Halloween, may have faded, but London’s sun-worshippers need not fear the onset of grey skies.

From 6th December, Winter Sun – a specially commissioned public artwork from artists James Bowthorpe and Kim Coleman working alongside architect Andrew Lock – will be bringing a ray of eternal summertime back to the square.

And how exactly are they going to play God with the seasons? By way of a circular structure, five metres high by 18 metres wide, no less.

It will nestle among the trees of Granary Square, creating an endlessly dimming and brightening space, encircled by twelve glowing ‘suns’. They will simulate daybreak, approximate daylight, or bounce light back into the darker spaces, like moons.

The idea is to form a ‘hearth-like’ gathering spot for chilly urbanites during the bleakest, darkest days and nights of the year. And if the glow of the suns isn’t quite enough of an enticement on a bleak winter’s night, we reckon the promise of a special hot cocktail menu should do the trick.

A bar at the centre of the art structure will be knocking up cockle-warming concoctions made with locally-sourced ingredients such as honey, horseradish and winter fruits. Look out for ales, lagers and ciders including award-winning Hallets and 21 Guns American IPA, and different varieties of rum, gin, whiskey and cognac.

Comfort food will include traditional British pies, scotch eggs and sausage rolls. We can’t think of a hotter-sounding hang out.